‘Doctor Who’ Shakes and Stirs Season 12 Up With a Big Reveal in “Spyfall, Part 1”

Over the decades, Doctor Who has assumed a plethora of identities: in the ’60s it was an educational program with a sci-fi twist, in the ’70s it was b..

Over the decades, Doctor Who has assumed a plethora of identities: in the ’60s it was an educational program with a sci-fi twist, in the ’70s it was briefly a James Bond-inspired espionage series, in the ’80s and on, it embraced its camp. With the 2005 reboot, Doctor Who embraced and shed even more identities: the blue-collar soap, the fairy tale adventure, and even flashes of hard sci-fi. Last season was a much celebrated new era of Doctor Who, one led by a new showrunner, Chris Chibnall, and the exciting first female Doctor of the series, played by Jodie Whittaker. It was going to be an all-new Doctor Who, Chibnall promised, one without the tedious plot twists and convoluted mythology of the previous seasons. But the result was a season without an identity, with episodes that felt like solid sci-fi stories by talented and diverse sci-fi writers, but without that special oomph that made Doctor Who feel like Doctor Who. Whittaker’s Doctor, despite the effervescence with which she played her, felt like a non-entity, running through forgettable plotlines on which she made little actual impact.

It’s no surprise that the highs of last season — apart from that mid-season high-concept swing “It Takes You Away” — were when old enemies returned and familiar Doctor Who winks were made. So perhaps it’s no surprise that, after having overcome his first-season growing pains, Chibnall is doubling down on that classic Doctor Who vibe, including one big enemy making a surprise return. I still don’t know if the Chibnall era has found its own identity yet, but it’s certainly done a good job at retreading some classic Doctor Who identities; in the first episode of the season, “Spyfall, Part 1,” the series plays with some major Jon Pertwee-era stylings. This season is all shaken and stirred, with an explosive Bond-inspired opening involving a network of spies that are being attacked by mysterious translucent humanoid beings that change the very nature of human DNA. Say it with me in the Jennifer Jason Leigh voice: “Annihilatiooon.” 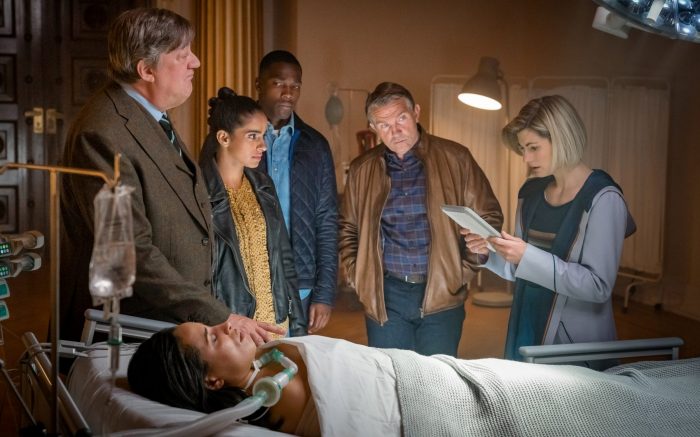 The episode opens with strange luminous alien beings emerging from the walls to swallow up groups of (very wooden) spies across the world, with the figures looking eerily inspired by the figure from the 2018 film Annihilation. That’s the only resemblance to that eerie Alex Garland film, however, as “Spyfall, Part 1” is Bond bombast all the way. The “fam” (which is the only time I’m going to refer to them by this twee new label, “companions” works fine) is taking a rare break from their travels to catch up on their ordinary lives — Ryan (Tosin Cole) playing basketball with friends, Yaz (Mandip Gill) dodging prying questions from her family, Graham (Bradley Walsh) making peace with his wife’s death — when they’re all picked up by stoic secret agents. It feels like the show is finally making an effort to give presonalities and inner lives to these characters we had spent a whole season with, yet had barely known at all; none of them, with the exception of Graham had a real arc. I’m glad that the series seems to be making a concerted effort to remedy some of the season 11 problems, including the crowded nature of the TARDIS — this episode, all three get something to do apart from looking slack-jawed at the Doctor as she rattles off technobabble.

The Doctor is last to be picked up by these secret agents, who begin to explain the situation to the group when they’re suddenly car-napped, an unknown force taking over the car and nearly killing them before the Doctor stops it. A disembodied voice who refers himself as “C” (in a fun Charlie’s Angels nod) speaks from the car to inform them of the danger they’re in, and Team TARDIS heads to MI6 in London. C is revealed to be Stephen Fry, who brings the Doctor up to speed: agents are being attacked, their DNA rewritten, and a tech mogul named Daniel Barton (Lenny Henry) seems to be involved. The Doctor and her companions accept their mission to investigate, but things go haywire when C is suddenly shot in the back of the head. 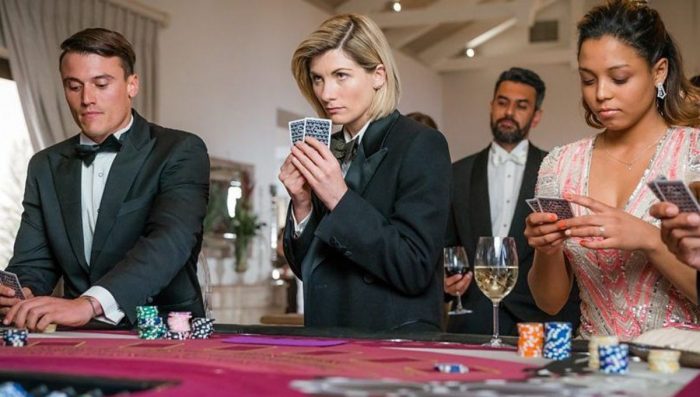 As the Doctor and Graham head to Australia to visit an old friend and former MI6 agent, Yaz and Ryan dive into undercover work — Yaz with a little more enthusiasm than the anxious Ryan. Humor! Remember it? Doctor Who was sorely lacking in comedy last season, and this season timidly brings some out, though to middling success. Cole plays the nervous energy to some chuckle-worthy effect, even getting some mild slapstick in there, but the episode is a little too taken with its epic cinematic scale to really let the jokes land. But hopefully this is a sign that we’ll get some more fun camp Doctor Who in the future.

While Yaz and Ryan infiltrate Daniel Barton’s company and analyze his DNA under the cover of being a reporting team, the Doctor and Graham meet “O,” a former MI6 agent who had championed research into all things alien. Having met once before but mostly “texting buddies,” the Doctor is thrilled to meet this old friend, played with a nerdy nervousness by Sacha Dhawan. But their cheery meeting is interrupted by an attack on his isolated cabin in the outback, in a dread-filled sequence straight out of a horror movie. The effect of an army of glowing alien beings standing still in formation is actually quite creepy, and is already more impressive than half the forgettable monsters of last season. The scene climaxes with the Doctor and O trapping one figure in a glass cage, where the figure taunts the Doctor. As the figure begins to overload itself with energy, Ryan and Yaz find themselves attacked by a group of the creatures while snooping around Daniel Barton’s office — Yaz getting absorbed by a creature and sent to dark, misty dimension populated by hundreds of twisted black stalks down which jolts of electricity run. A big explosion: Yaz is suddenly transported into the cage, disoriented and frightened. 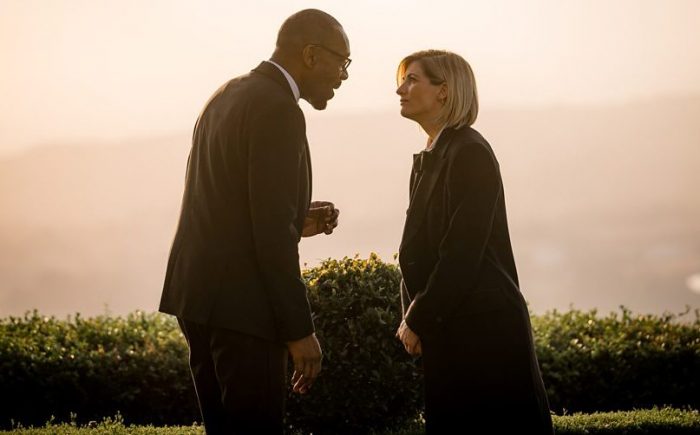 After the Doctor decrypts alien code hidden within the data that Yaz and Ryan found, they figure out that the aliens are spies embedded on Earth — or maybe multiple Earths? That’s a mystery that will be answered in part 2, because Team TARDIS has a party to crash. After all, you can’t have a Bond-style episode without party heist escapades. The group, along with “O,” get dressed to the nines to infiltrate Daniel Barton’s villa, where he’s holding a casino-themed party. Confronting Barton about his curious DNA signature, which is not entirely human, the tech mogul leads the group on a merry car and motorcycle chase through a vineyard and to an airplane hangar, where Barton rushes to take off in his private plane. In a blockbuster-sized sequence, the Doctor and co. chase the plane and pull themselves inside — but wait, “O” has just said something strange.

Ta-dah! We have our new Master. It’s revealed that Dhawan is actually playing the Master, the Doctor’s longtime friend and “best enemy,” who has yet again fooled our trusting time lord. The Master is the most consistent foe that the Doctor has faced over the past 50-plus years, and in recent years, one of her most fascinating foils. After years of being every hammy James Bond villain (how fitting that this is the episode that the Master gets reintroduced), showrunner Steven Moffat and actress Michelle Gomez reshaped the Master into an agent of chaos, and then, a tragic figure of redemption. Dhawan seems…fine as a maniacally evil version of the Master who veers a little closer to the John Simms version (my notes are a little unkind to Dhawan’s generic good looks and somewhat bland performance until the reveal), but most insultingly, his version seems to do away with all the fantastic, unprecedented development we had seen the Master go through as Missy, his previous incarnation. Or maybe it doesn’t? “Everything you think you know is a lie,” the Master smirks to the Doctor before blowing up the plane and sending her to the alternate dimension, which puts into question whether this is a future version of the Master after Missy, or whether this Master is from our universe at all. I sincerely hope that is the case, because if Chibnall is so intent on wiping the slate clean that he completely erases some of the best character writing we’ve seen on the show, then I might blow up a plane too. (I won’t. But I will be very mad.) But this is only part 1 after all! Let’s see what’s in store for part 2.

The post ‘Doctor Who’ Shakes and Stirs Season 12 Up With a Big Reveal in “Spyfall, Part 1” appeared first on /Film.

Next post ‘Killing Eve’ Season 4 is On the Way, So Get Ready For More Murder