TV Bits: ‘Saved by the Bell’, ‘The Witcher’, ‘Severance’, ‘Gloop World’, ‘Diary of a Future President’

In this edition of TV Bits: The Saved by the Bell revival has found its star. Netflix has revealed The Witcher timeline, in case you’re confused. Pat.. 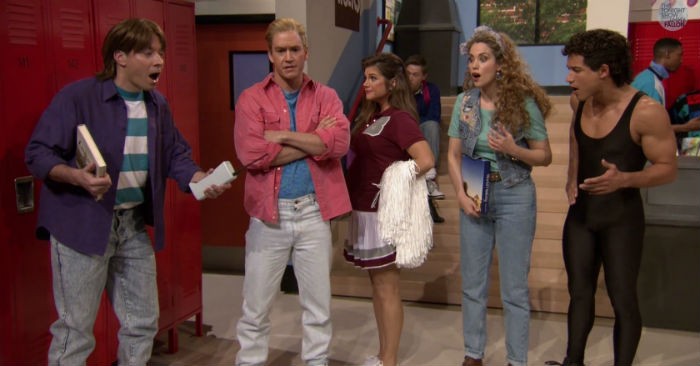 Did you know there’s going to be a Saved by the Bell revival? Well, you do now. The new take on the teen series is headed to Peacock, and it’s found its star. Variety says that Josie Totah will lead the show, playing “Lexi, who is described as a beautiful, sharp-tongued cheerleader and the most popular girl at Bayside High, who is both admired and feared by her fellow students.” In the new Saved by the Bell, “When California governor Zack Morris gets into hot water for closing too many low-income high schools, he proposes they send the affected students to the highest performing schools in the state – including Bayside High. The influx of new students gives the over privileged Bayside kids a much needed and hilarious dose of reality.” Original cast members Mario Lopez and Elizabeth Berkley will be returning as well.

A quick crash course in the multiple timelines of The Witcher. #TheWitcher pic.twitter.com/qdBVq7ih7R

Some viewers have been confused by the timeline of The Witcher, the new Netflix series starring Henry Cavill and his glorious wig. If you, too, are puzzled, Netflix went ahead and put together a handy little timeline. I haven’t watched the series yet, so none of this means anything to me. But if you were wondering when “Geralt becomes the Butcher of Blaviken” (huh?) or when “Yenn returns to Aretuza in advance of the Nilfgaardian attack” (??), here’s your answer.

Patricia Arquette, who very recently won a Golden Globe for her work on the Hulu series The Act, has a new gig lined up. The actress has joined the cast of Severance, a new Apple TV+ series, per Deadline. The series is being directed by Ben Stiller, who also directed Arquette in Escape From Dannemora. The show “takes place at Lumen Industries, a company that’s looking to take work-life balance to a new level.” Adam Scott also stars, playing “Mark, an employee with a dark past trying to put himself back together.” Arquette is playing Mark’s boss.

Justin Roiland, co-creator of Rick and Morty, has a new show headed to Quibi, the streaming service for short-form content. It’s a “clay-based stop-motion” show called Gloop World, and, according to THR, it “centers on two anthropomorphic blobs, roommates Bob Roundy and Funzy. The series will follow the absurd, strangely relatable adventures of the pair around the malleable, clay-mated suburbia and outskirts of the title location.” Regarding the show, Roiland said:

“Gloop World has been a dream of mine to make for almost seven years. A tactile clay animation show with a mysterious, weird and expansive world and really fun characters, fingerprints and all. I couldn’t have done this without the folks at Stoopid Buddy Stoodios, who understood exactly what I meant when I wanted the clay animation to have an imperfect approach, where you can see the animators in the work. I want the Gloop characters to feel like you can reach into your phone and grab them yourself. Can’t wait to share this weird silly show with the world.”

Remember: there’s more to Disney+ than The Mandalorian. They have a bunch of other originals as well, like Diary of a Future President. The series, which comes from executive producer Gina Rodriguez, tells “the origin story of a future leader. Told using the narration of 12-year-old Cuban American girl Elena’s diary, this new family comedy follows her journey through the ups and downs of middle school, which set her on the path to becoming the president of the United States.” You’ll be able to check the show out on January 17.

The post TV Bits: ‘Saved by the Bell’, ‘The Witcher’, ‘Severance’, ‘Gloop World’, ‘Diary of a Future President’ appeared first on /Film.

Previous post Jemaine Clement Discusses Being in At Least Two of the ‘Avatar’ Sequels, Future Flight of the Conchords Music [TCA 2020]