Theme Park Bits: Lord of the Rings at Universal, Sam the Eagle Comes to Epcot, and More

In this edition of Theme Park Bits: Is Universal Orlando building a Lord of the Rings land? Disney’s scaled back on its bus service for select resort..

There are few major cinematic franchises left to turn into theme-park areas. Star Wars has plenty of representation in the Disney theme parks, Harry Potter is all over the Universal parks, and…well, what else could there be? One big option would be the Lord of the Rings films, and based on some disparate details, Universal might just be attempting to turn those films into a new themed land. That article is, of course, speculating based on some intriguing pieces, but if it’s true, we might see a Middle-Earth in America by the mid-portion of this decade.

There was once a time in Epcot when you couldn’t find intellectual property everywhere you turned. It’s true, Disney characters and films used to be a non-presence in the second Disney World gate, but times have, of course, changed radically. Over at the American pavilion in World Showcase, they’re getting an IP upgrade to a counter-service restaurant, but this is the rare case where the IP might genuinely work. The Regal Eagle Smokehouse will be themed to the Muppets, specifically Sam the Eagle. Considering how the Muppets have been used at the Disney theme parks in the past, this is one upgrade that might actually feel like an upgrade. The new restaurant is slated to open later this winter, so keep an eye out. 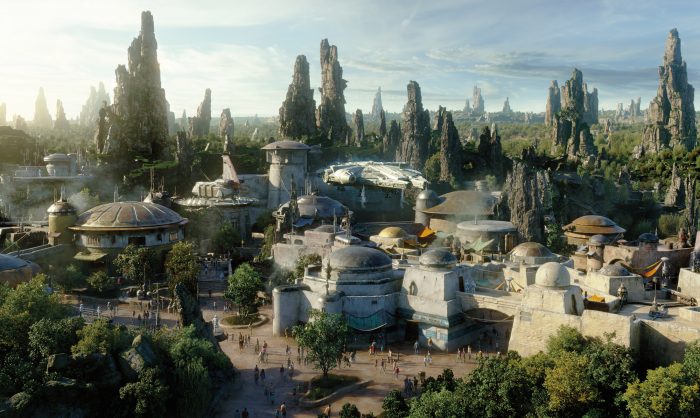 Let’s say you’re visiting Walt Disney World in the month of January. (Aren’t you lucky.) You’re probably hoping to head on over to Disney’s Hollywood Studios to experience Rise of the Resistance over in Star Wars: Galaxy’s Edge. But, of course, there’s only so much time in the day and only so many spaces available to go on the ride. Good news: until January 26, Disney’s Hollywood Studios will open its doors on additional days at 7 a.m. If you’re heading over there during the Martin Luther King, Jr. Day holiday weekend, you’re in luck. If not…well, get there as early as you can.

If, however, you are at the Walt Disney World Resort, you’ll want to make sure you have a plan of attack of arriving at a given park. In the past, it was simple enough: you’d have to take a bus to parks like Epcot and Disney’s Hollywood Studios. The advent of the Disney Skyliner, though, means that Disney is scaling back on its bus service in select resort hotels, such as Disney’s Riviera Resort and Disney’s Caribbean Beach Resort. The reason is simple: Disney wants you to ride the Skyliner to these parks instead. This information is important to know in case you’re waiting for a bus that never comes.

For a long time, if you visited Downtown Disney at the Disneyland Resort, you could have stopped by the Build-a-Bear Workshop to…well, build a bear. But the overhaul of Downtown Disney in the last couple years left the workshop without a theme-park home in the Anaheim area. Until, that is, January 28, when Build-a-Bear is moving over to Knott’s Berry Farm. This will help set up the park’s 100th-anniversary theme, of being bear-focused (hence the playful “Knott’s Bear-y Farm” moniker they’ll be using in marketing). You’ll likely still be able to buy some Disney-themed characters there, but if you’re a big fan and in Anaheim, prepare to make a trek to the rival park.

The post Theme Park Bits: Lord of the Rings at Universal, Sam the Eagle Comes to Epcot, and More appeared first on /Film.