Doctor Who is a show of sky-highs and deep lows, and baby, we’re back up in the air again. After last week’s episode wasted a fantastically creepy mon..

Doctor Who is a show of sky-highs and deep lows, and baby, we’re back up in the air again. After last week’s episode wasted a fantastically creepy monster design and an ambitious premise, Doctor Who is back to the well trod historical. Doctor Who has had an unusual history with its historical episodes — early seasons of the Classic series infusing as little sci-fi elements as possible, while the Doctor Who revival went full-tilt on “Shakespeare battles alien witches,” etc. In their inaugural season, Chris Chibnall and his writing team attempt a return to those period-accurate historicals, with the Doctor and Team TARDIS barely making a dent on history as it happened in front of them. It was educational, it was thoughtful, but it was boring. But this season is changing all that, first with the season premiere bringing in three important female figures in the invention of computers (before erasing their memories, boo), and now with the Nikola Tesla-centric episode, “Nikola Tesla’s Night of Terror.”

This season of Doctor Who has swung way in the opposite direction of last season’s reverent but stiff historical episodes — now we get Tesla battling an army of scorpion aliens, and it rules. But most disarmingly, it’s sweet and endearing to Tesla in a way that Doctor Who hasn’t been to a real-life figure since the all-time great 2010 episode, “Vincent and the Doctor.” Is this Jodie Whittaker‘s own “Vincent and the Doctor”? It’s not quite on par with the Richard Curtis-penned episode, but it’s almost up there. 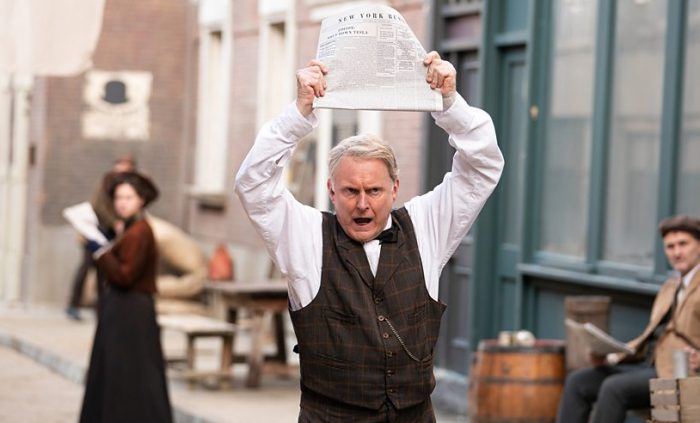 In Gilded Age New York, Nikola Tesla and his loyal assistant Dorothy Skerritt are presenting his new idea for a wireless machine to a group of incredulous investors, who immediately reject his request for $50,000. But things get worse for the intrepid inventor when one of his employees is found dead, presumably by a faulty machine, and he is forced to shut down and sequester himself away to his work alone. But in his darkened laboratory, he hears strange noises and investigates to find a green glowing ball. And then who should stumble into him but the Doctor, chased by a hooded man shooting green lasers and happily asking Tesla if he had found anything “strange.”

It’s always fun when the Doctor is introduced in all her chaotic energy from the POV of a new character, in this case, the rather well-known historical figure Tesla. It’s been done to varying degrees of success in episodes like the series-best episode “Blink” and the series-worst “Love and Monsters.” But I’m happy to say “Nikola Tesla’s Night of Terror” is closer to the former by virtue of the strength of Goran Visnjic‘s endearing performance as Tesla, and the well-established dynamic of the Doctor and Team TARDIS. Kudos to first-time Doctor Who writer Nina Metivier, who injects the episode with a breathless energy and a fuller understanding of the characters than any past episode. This may be one of the strongest episodes for the team yet, as an incredibly crowded TARDIS (they are later joined by an indignant Thomas Edison) doesn’t detract from the episode as it’s done before — instead it adds to its exciting, ricocheting energy.

The Doctor drags Tesla and Dorothy to a train car where the gang had been waiting for her return (dressed in period costume for once, and looking great!) and immediately interrogates Tesla about lying to her on whether he’d found something strange. Overjoyed to find out that the man she had accidentally kidnapped was Nikola Tesla (though Team TARDIS is less familiar, allowing the Doctor to give some audience-friendly exposition about the inventor), she insists they accompany him back to his lab, which is surrounded by protesting New Yorkers who scream that he doesn’t “belong in America.” Upon discovering that Tesla had found an Orb of Thassar, a piece of ancient alien tech that had been repurposed to spy on him, the Doctor and Tesla come to the conclusion that his famous rival Thomas Edison was behind all this. 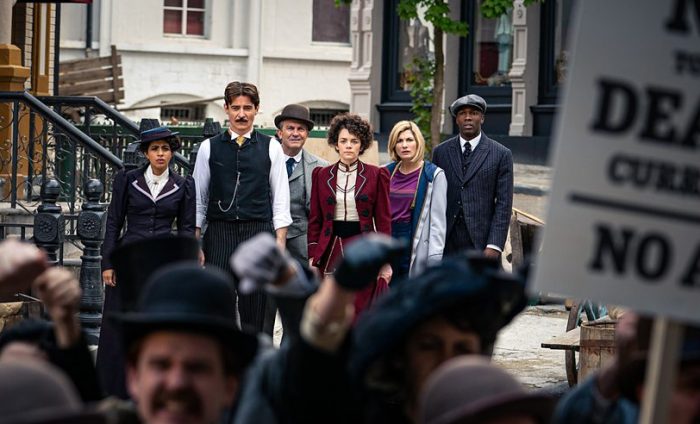 Edison had been waging a propaganda war against Tesla, riling up the mobs with lies about Tesla’s dangerous machines and experiments. But he is surprisingly willing to talk to the Doctor about his spying on Tesla, though he denies any knowledge of alien tech. Suddenly, Edison’s office is attacked by Edison’s spy, who is now sporting red glowing eyes and hand lasers — revealed to be a shapeshifting creature who had killed the original spy and taken his form. The moment when the creature shapeshifts to its original form, casting a tall, spindly shadow on the wall before its face melts a la Raders of the Lost Ark, is pure classic B-movie horror and is a wonderful little stylistic flair from director Nida Manzoor amid a jam-packed episode.

Meanwhile, Tesla is experimenting with the energy emitting from the ball, using it to power his various contraptions with Yaz’s help, when a frightened Dorothy enters, surrounded by two of the red-eyed aliens. They transport Tesla and Yaz to their alien ship, which is populated by giant scorpions and their savage scorpion queen (whose design looks like a cross between Doctor Who‘s Empress of Racnoss and Tim Curry in Legend). She reveals herself to be Queen of the Skithra, a race of scavengers who want Tesla to build them a galactic weapon. Tesla valiantly refuses, and angered, the queen threatens to kill Yaz. But before any harm can come to Yaz, the Doctor swaggers in (accompanied in the TARDIS by Dorothy and Edison) to rescue Tesla and berate the Skithra for basing their existence on stealing instead of creating in a rather on-the-nose, but perfectly Doctor Who, speech.

Doctor Who has featured many a historical figure before, but Goran Visnjic’s Nikola Tesla may be up there as one of the show’s best depictions of a real-life person since Tony Curran’s Vincent van Gogh. Eternally optimistic in the face of persecution and slander, Visnjic gives a vulnerable and lovely performance as a man who has life stacked against him, but perseveres nonetheless. His excitement over discovering that the Doctor is a fellow inventor is possibly the most wonderful exchange that Whittaker’s Doctor has had with a character yet. “Perhaps I will achieve nothing, but if I achieve anything it will be in the name of progress,” Tesla declares in the face of the Skithra, in a line that positively calls to mind one of the best Doctor Who episodes, “Vincent and the Doctor.” The real Nikola Tesla died penniless and unacknowledged, so the show’s recognition of his contributions to science (including the idea of a wireless network that would predate WiFi), is bittersweet but wonderfully human — alien scorpions aside. 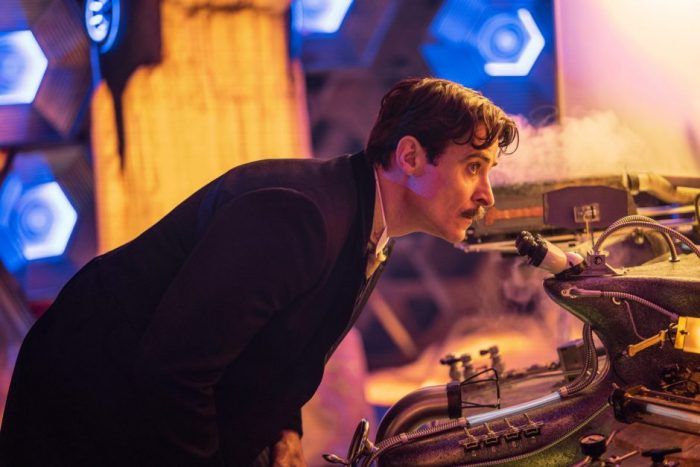 I Work for the Future

The surprising part of this episode is that it has two climaxes — the first being Tesla’s rescue from the alien ship floating invisible above the city, the second following the gang as they work to stop the Skithra from destroying humanity. The episodes launches into an energetic which involves Tesla taking out his plans to reconfigure his Wardenclyff Tower project (a real project predating WiFi that would have created an intercontinental wireless communication and power transmitter, but sadly never came to be) to strike down the spaceship. Meanwhile, Yaz and Edison work on clearing the streets (Edison helping by only slandering Tesla, of course), while the Doctor and Tesla start putting his plan into action. But both groups are interrupted by the sudden appearance of an army of Skithra, who chase Yaz and Edison down the street and attempt to attack Tesla’s tower, only to be blocked by shields that the Doctor had activated.

But the shields must go down for the plan to work, and the Doctor and co. prepare to face off with an army of scorpions with only Edison’s gun and some hammers. But instead, the Queen waltzes in for a standoff with the Doctor — this is where the Doctor’s inspirational monologues go a little long (though again, Metivier has really nailed the perfect frantic tone of Doctor Who dialogue), but it’s a fun little display of the Doctor’s cleverness, as she tricks the Queen into taking a transporter that sends her back to the ship, which they quickly destroy. But there is a moment of pathos amongst all of the Doctor’s speechifying: When the Queen menacingly asks her, “Have you ever seen a dead planet?” Whittaker’s face drops to show a seething anger that reminds us of the season’s ongoing arc. “I’ve seen more than you could possibly imagine,” she stonily replies, before sending the Queen to her death. It’s a cold moment from the Doctor that belies her cheery attitude that she’s shown up until this season, and hints at a great overall arc for Whittaker’s 13th Doctor.

But hope in the face of a bleak future is the theme of this episode, and one perfectly represented by Tesla, whose bleak, bankrupt future can’t be avoided, the Doctor tells a crestfallen Yaz. But even as Tesla is libeled by Edison’s newspapers once again, calling the world-saving events of the day before “Nikola Tesla’s Night of Terror,” he is unflappable. “The present is theirs, I work for the future,” Tesla confidently declares.

The post Glory to the Holy Wi-Fi Originator Nikola Tesla for an Electrifying Episode of ‘Doctor Who’ appeared first on /Film.

Next post Netflix to Stream All Studio Ghibli Films — But Only Outside the U.S.