Marvel’s Disney+ Trailer Breakdown: A Closer Look at ‘The Falcon and the Winter Soldier’, ‘WandaVision’ and ‘Loki’

Last night during the Super Bowl, fans were treated to the first official look at the first three live-action Marvel Studios shows that will be coming..

Last night during the Super Bowl, fans were treated to the first official look at the first three live-action Marvel Studios shows that will be coming exclusively to Disney+. The Falcon and the Winter Soldier, WandaVision, and Loki all had footage shown in the Marvel Studios Disney+ trailer, but it all went by so fast that it requires a closer look to see exactly what’s going on. So let’s take at the footage from each of the new shows and see what we can discern about each of them.

The Falcon and the Winter Soldier

Since this was the show that kicked off this teaser, let’s dig into the first footage from the series that will star Anthony Mackie and Sebastian Stan in their respective titular roles. But first, here’s the official synopsis released by Marvel Studios:

Following the events of “Avengers: Endgame,” Sam Wilson/Falcon (Anthony Mackie) and Bucky Barnes/Winter Soldier (Sebastian Stan) team up in a global adventure that tests their abilities—and their patience—in Marvel Studios’ “The Falcon and The Winter Soldier.” The all-new series is directed by Kari Skogland; Malcolm Spellman is the head writer. Debuts on Disney+ this fall.

The trailer opens with this shot of Captain America’s shield stuck in a tree as the image expands to fill the screen. Then comes Sam Wilson (Anthony Mackie) grabbing the shield out of the tree. Clearly he’s trying to get a handle on Cap’s signature shield and how to wield the physics-defying weapon.

As the Marvel Studios logo changes from red to blue (as seen above), likely as a way to reference Disney+, we hear Bucky say, “It’s time.” Then a quick flurry of images fly by, including the above shot of four skydivers with wing suits. There aren’t any discerning characteristics about any of them other than the fact that all of their faces appear white, so Sam Wilson doesn’t appear to be among them.

We get a better look at one of the skydivers, who has drawn two guns and turns his body around, presumably to open fire on the divers in pursuit. Is it just me or does that face look like Jeremy Renner? I can’t imagine what Hawkeye would be doing skydiving with guns, but he is a SHIELD agent after all. Any chance we see Hawkeye make an appearance and do some work with The Falcon and the Winter Soldier?

A quick shot of Falcon shows the Captain America successor flying through a rocky valley in his trademark wing suit, but the body of his suit appears to have been updated slightly, looking a little more like his comic book character design.

Sebastian Stan returns as Bucky Barnes with a fresh new haircut and a kick-ass jacket. With a gun in hand, he’s threatening someone, and the reverse shot shows us who.

You can see the same collar in this shot that you can in the preceding one, showing us that Bucky was pointing a gun at Baron Zemo, the villain from Captain America: The Winter Soldier. In this shot, Bucky’s metal arm is dropping bullets out of his hand. He might be doing this after threatening to shoot Zemo. But the question is how did Zemo break out of prison and what is he up to now?

That might look like Captain America from the back, but don’t be fooled. That’s Wyatt Russell as U.S. Agent, the replacement for Captain America now that Steve Rogers is gone. It looks like he’s appearing at some kind of ceremony at a football game.

We’ve heard The Falcon and the Winter Soldier focuses on the government rejecting Sam Wilson as the replacement chosen by Cap himself. It would appear that U.S. Agent even has Cap’s shield. But how did they get it? Does the government force Sam Wilson to give it up? Do they have a second shield?

The final shot we get from Falcon and the Winter Soldier has Sam and Bucky giving each other a friendly handshake, seemingly in the same place that Sam has been training with the shield. Maybe Bucky is helping him get a handle on how to wield it right. Is there a chance Sam ends up passing the mantle onto Bucky at some point, even it’s only temporarily?

Marvel Studios’ “WandaVision” blends the style of classic sitcoms with the Marvel Cinematic Universe in which Wanda Maximoff (Elizabeth Olsen) and Vision (Paul Bettany)—two super-powered beings living their ideal suburban lives—begin to suspect that everything is not as it seems. The new series is directed by Matt Shakman; Jac Schaeffer is head writer. Debuts on Disney+ this year.

The first shot shows us that this will be unlike anything we’ve seen in the MCU before. Just as the previously released concept art teased, WandaVision takes inspiration from classic sitcoms, this one going all the way back to the black and white television days. Vision is wearing a nice cardigan, shirt and tie combination, looking like any Dad from classic TV shows.

The next shot shows Wanda in a similar fashion from the same period, but it also quickly flashes to other decades. Vision says, “Wanda, welcome home.” And then we suddenly get four quick flashes of different versions of Wanda.

In rapid succession, we get a shot of Wanda in the 1970s (top left), a comic accurate Scarlet Witch costume (perhaps in a modern day sitcom setting), in color while black and white surrounds her, and finally in what appears to be a 1980s sitcom, possibly styled after something like Roseanne. WandaVision will clearly be taking us through various decades of television as inspired by familiar TV sitcoms. But the question is why?

What is happening in WandaVision? We know it’s going to be “weird” because that’s all Marvel boss Kevin Feige and Bettany and Olsen have been able to say about the show. But how will this narrative unfold across these sitcoms?

We suddenly go back to the black and white sitcom setting where Wanda and Vision appear to have just been married, coming home for the first time as a couple. If I had to guess, I’d say each episode will unfold in a different decade, and something weird will happen that takes them into the new one, slowly revealing what’s afoot in the series.

One more shot from the 1970s setting has Wanda looking startled by something. Plus, if you look at her body, it would appear that Wanda in this decade is pregnant. That will come into play in another shot we’ll get to in just a second. But first…

A shot of Wanda answering the phone (“Vision residence!”) is shown on a vintage television, and we suddenly pan up to see a freaked out Wanda, in color, in the middle of the black and white setting.

Something odd appears to be happening. Perhaps this is as Wanda slowly starts to come out of whatever is creating this surreal experience. Maybe she starts wandering through each setting as her modern self. 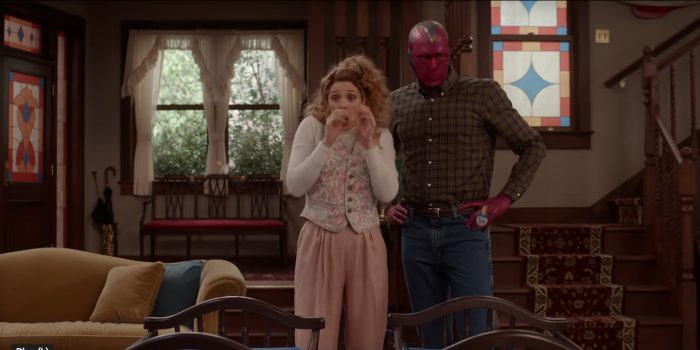 We talked about that shot of Wanda looking pregnant, and very quickly we get this 1990s-inspired sitcom where Wanda and Vision look on at two cribs as two pacifiers fly up and down from them. These two babies are likely William and Thomas, aka Wiccan and Speed, mutants with their own special abilities.

In the comics, Scarlet Witch used her reality-warping powers to create twin sons, unknowingly using two (of five) scattered fragments of the soul of the demon Mephisto. Since Mephisto isn’t part of the MCU (at least not yet), I wouldn’t be surprised if the twins end up being created by way of the Soul Stone somehow, which would explain why they’re the children of her and Vision. But exactly how they’ll come into play in the MCU remains to be seen.

This final shot gives us Wanda and Vision as a cheesy, happy sitcom couple. Will this series allow them to get a “happily ever after” despite that having been taken away by Thanos? Plenty of characters come back from the dead in Marvel Comics, so bringing Vision back wouldn’t be all that surprising.

After making a quick getaway in Avengers: Endgame, Tom Hiddleston is back as Thor’s step-brother Loki, the god of mischief. Here’s all that Marvel was willing to say about the series:

In Marvel Studios’ “Loki,” the mercurial villain Loki (Tom Hiddleston) resumes his role as the God of Mischief in a new series that takes place after the events of “Avengers: Endgame.” Kate Herron directs and Michael Waldron is head writer. Debuts on Disney+ next year—2021.

Finally, Loki gets just a short tease. Interestingly enough, there are two alternate logos that pop up before the final one appears with the Marvel Studios brand above it. The varied letters are likely used to represent different time periods visually since the show is said to follow Loki as he jumps through time. After that, we only get one single shot of Loki.

Tom Hiddleston playfully and threateningly says just one line, “I’m gonna burn this place to the ground.” What he’s wearing looks like some kind of prison suit, and considering the threat he’s made, it would seem as if Loki is being held against his will somewhere. In fact, this shot just might let us know who is holding him.

The jumpsuit has a logo that says TVA, which probably stands for Time Variance Authority, a group introduced in 1986 in Thor #372. The TVA is an inter-dimensional agency tasked with monitoring and maintaining the multiverse. If something or someone in a timeline becomes too unruly or dangerous and threatens the existence of another timeline, the TVA handles it. It’s their job to stop others from changing the past or future for their own good fortune.

Since Loki is going to be using the Time Stone (or Tesseract) to move through different time periods, it only makes sense that he would garner the attention of the TVA. This would explain why we’ve heard that Loki has some kind of tie-in to the upcoming Doctor Strange in the Multiverse of Madness. This could be a lot of fun, and it might pave the way for the introduction of characters from other timelines, perhaps even the X-Men or the Fantastic Four.

The post Marvel’s Disney+ Trailer Breakdown: A Closer Look at ‘The Falcon and the Winter Soldier’, ‘WandaVision’ and ‘Loki’ appeared first on /Film.

Previous post ‘Hamilton’ Movie Coming in 2021; “Live Capture” of the Broadway Cast Was Shot in 2016