Cool Stuff: New ‘Back to the Future’ Funko POPs Coming for the 35th Anniversary This Year

There have been a handful of Back to the Future Funko POPs released over the years, but most of them have been tied to the original movie from 1985. T..

There have been a handful of Back to the Future Funko POPs released over the years, but most of them have been tied to the original movie from 1985. That will change later this year though when a batch of Funko POPs inspired by the sci-fi franchise hit shelves in honor of the original film’s 35th anniversary. Along with some new collectible figures inspired by the first movie, we’ll finally get some more Funko POPs from Back to the Future Part II. Check them out below.

New Back to the Future Funko POPs 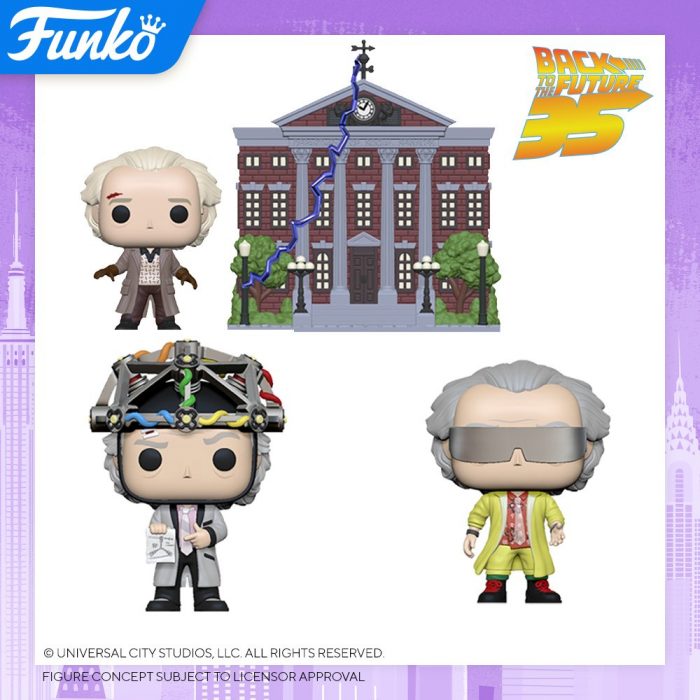 First up, Funko will expand their POP Town line with the Hill Valley Clock Tower as it’s getting struck by lightning. It will come with a new version of Doc Brown, this time in the outfit that he wears during the night of the famous Hill Valley lightning storm in 1955. He even has the bump on his head from when he fell and hit his head on the toilet, giving him the vision of the flux capacitor, which makes time travel possible. Speaking of which…

Since Marty McFly has been getting most of the Funko POP love, Dr. Emmett L. Brown is getting a couple other new figures. There’s a version from the original Back to the Future with Doc wearing his telepathic head gear that doesn’t work so well and holding a drawing of the flux capacitor. There’s also a futuristic Doc wearing clothes that he got from the year 2015, including those cool silver glasses. 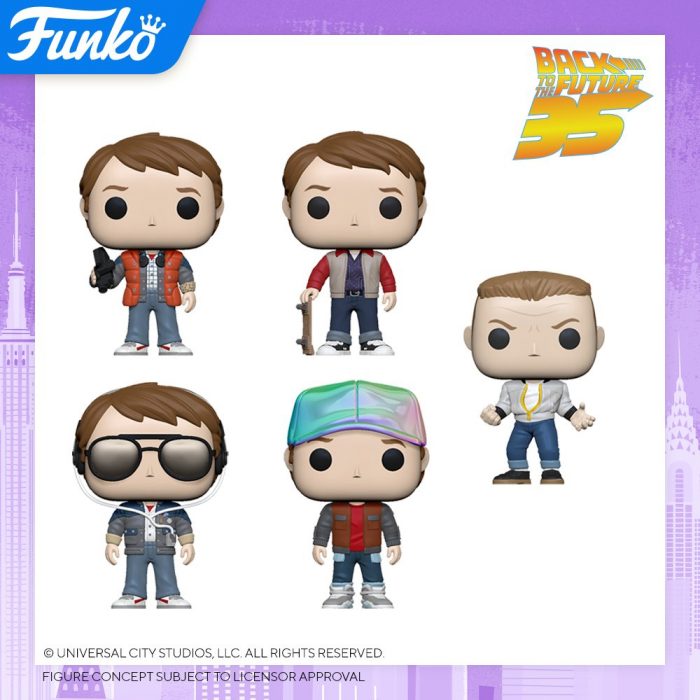 Of course, Marty McFly is still the hero of Back to the Future, and he’s getting a handful of new figures. Not only is there a new Marty McFly in his signature orange vest, this time holding a video camera, but there’s one in 1950s clothes holding the makeshift skateboard he makes out of a kid’s wooden scooter.

There’s also a version of Marty from the opening sequence of the movie, when he’s wearing those reflective sunglasses and listening to his Walkman before overloading Doc’s sound system. We wish he was holding that little yellow guitar instead, but we already have another version of Marty holding a guitar from the 1950s, so this mixes things up a bit.

Meanwhile, you can see that there’s a Funko POP of Marty McFly Jr., complete with self-drying jacket, untucked pockets, power laced shoes, and iridescent hat. However, that’s not really Marty McFly Jr., but Marty McFly in disguise as his future son. You can tell because one of the sleeves isn’t longer than the other.

Finally, Back to the Future franchise villain Biff Tannen finally gets his own Funko POP figure. This is the young 1950s Biff, but we wouldn’t mind seeing the alternate 2015 Donald Trump version of him get a figure eventually.

These were announced at Toy Fair 2020 back in February, but there’s no release date yet. We’re expecting them either sometime this summer when the original film’s actual 35th anniversary happens on July 3 or on October 21, which has been dubbed Back to the Future Day since that’s when Marty McFly first traveled back in time.

The post Cool Stuff: New ‘Back to the Future’ Funko POPs Coming for the 35th Anniversary This Year appeared first on /Film.