A long time ago, in this very galaxy, the first live-action Star Wars spin-off movie was released in theaters. Much has been said about the production.. 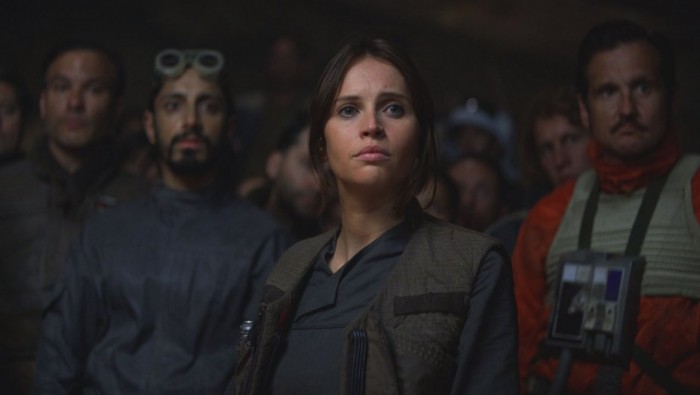 A long time ago, in this very galaxy, the first live-action Star Wars spin-off movie was released in theaters. Much has been said about the production of Rogue One: A Star Wars Story, but two of the credited writers, Gary Whitta and Chris Weitz, recently participated in a watch party of the film and shared several stories about the making of the movie, including which scenes were reshot late in the game by Tony Gilroy.

Since Rogue One’s release, fans have been wondering which specific scenes Tony Gilroy reworked during reshoots, but information like that has been tough to come by. But thanks to Whitta and Weitz, who took part in a watch party earlier this week hosted by IGN, we now know that Cassian Andor’s introduction, Jyn Erso’s rescue by K-2SO, Saw Gerrera interrogating Bodhi Rook, and Vader and Krennic’s discussion on Mustafar were all reworked by Gilroy.

But there was plenty more divulged during the feature-length Q&A, and since there wasn’t a proper commentary track on Rogue One’s home video release, this is the closest thing we have. Let’s dive into some specifics about the rest of the movie, shall we?

Gary Whitta: “The way that the movie opens is really one of the first interesting conversations that Gareth [Edwards] and I had – should there be an opening crawl? I did write one. You’ll never see it, but I did. I wrote more than one, back when we were still experimenting with the idea of doing one. But one of the things that we arrived at fairly early on in the process was that it was OK to liberate ourselves from the traditional storytelling language of Star Wars. A lot of the visual tropes – the iris wipes, the opening crawl, things like that – we felt like these standalone movies had more license than the saga films to try to do something a little bit different.

“One of the other conversations we had was, ‘Can we do a time jump?’ What you see here takes place twenty or so years before the rest of the movie. Star Wars has never done that in the saga films. Once we realized it was OK to do that, we felt a lot more creative freedom to tell the story the way we wanted to tell it.”

Gary Whitta: “Gareth and I talked a lot about how much we love the opening of Inglourious Basterds, if you remember that, with the French farmhouse and Christoph Waltz, the Nazi, comes to interrogate the French farmer. This scene was very much inspired by that. Krennic is basically the Christoph Waltz Nazi coming to interrogate the poor innocents who have to hide this girl. It’s one of the more direct cinematic references in the film – I’m surprised more people didn’t pick up on it.”

Jyn’s Mom Was Originally Going to Be a Jedi

Gary Whitta: “I don’t know if that’s ever been talked about. The kyber crystal is the last tiny piece of that that’s left, but the original idea was that she was a Jedi in hiding. It was one of the first things that got killed, and rightly so. That was kind of a vestige of me as a fanboy wanting to feel like we were checking all the Star Wars boxes. As much as I love the whole military angle of Star Wars, the Rebellion and the Empire, I remember saying to Gareth and to [Lucasfilm executive creative director] Doug Chiang, who was in the room as well, ‘This is going to be the very first Star Wars movie that doesn’t have a lightsaber in it. How does that make you feel?’ And they were like ‘It makes us feel great! We want to try these different things.’ Of course, it ended up not being true. We had an amazing lightsaber sequence at the end of the movie.

Chris Weitz: “Something interesting that Gareth eventually was keen on was to imagine a world where there was no direct evidence of the Force. So what was the period like before Luke Skywalker came along and met Obi-Wan and there was this new hope. It’s a period of possible despair.”

Kyber Crystals Originally Played a Larger Role in the Story

Chris Weitz: “[Galen Erso] originally intended to be able to use kyber crystals as a source of energy for the galaxy so there would be no more conflict, and it became weaponized under the [Empire].”

Gary Whitta: “I believe they touch on that in some of the spin-off novels…the idea that kyber crystals were going to power the Death Star was an idea that had been floating around and we crystalized it, forgive the pun, in this movie. But I always loved the idea, because Jedi lightsabers are powered by kyber crystals. So this crystal, which had once been used to power the weapons that protected peace and justice in the galaxy, are now powering the weapon that threatens all of that. I don’t know how much of that was really deliberate, but after the fact, it occurred to me that there was a nice bit of poetry in that idea.”

Gary Whitta: “Gareth was interested in the idea of it not being black and white. That there be shades of grey on both sides…we very quickly honed in on the idea of an extremist, militant rebel. Someone who had legitimately crossed over from being a freedom fighter into just being a terrorist…[We said] ‘Who’s our Colonel Kurtz? We want the guy at the end of the river, Marlon Brando, Colonel Kurtz, Apocalypse Now type of character who’s gone off the deep end.’ And [former Lucasfilm Story Group head] Kiri Hart said, ‘Well, George actually created a character for The Clone Wars that might fit that really well.’”

Gary Whitta: “In earlier versions, the Death Star is something that Jyn goes and finds. It’s much more like Zero Dark Thirty, where she’s putting together the clues of bin Laden is in this house in Pakistan – the Empire is building this terrible weapon. It was a battle for Jyn to try to convince the rebels to take it seriously. I think the feeling is that was too much of a slow burn…the idea was to front-load that a lot more and introduce the idea that the Empire was building a planet-killing weapon right up front.”

Jedha Eventually Replaced Ord Mantell, and Dantooine Was Once in the Film

Chris Weitz: “For a while, we had Ord Mantell, but then it shifted a bit to the notion of an occupied territory, like in Casablanca.”

Gary Whitta: “In the original draft, Jyn went to Ord Mantell, which is a planet that’s referenced in The Empire Strikes Back, to find an arms dealer who could help her find Saw Gerrera. There was a bunch of action that happened on Ord Mantell, and then she went to another planet where Saw Gerrera was living on a hidden moon. His splinter group, his militant faction, was on a moon called Yarid, I believe. It was a separate planet, and as the story consolidated down…Jedha filled in for both of those planets.”

Chris Weitz: “You do sit in a meeting where they tell you to lose a planet because there’s a budget shortfall. It’s amazing to think that Star Wars actually has a budget, but it does.”

Gary Whitta: “Originally, the rebel base is actually on Dantooine. And you see the rebels evacuate Dantooine and move to Yavin 4. But it didn’t really accomplish anything in the story, other than to nod to the Star Wars fans, like, ‘Hey, remember Dantooine? There was an evacuated rebel base there? Well, now you get to see them evacuate it.’ But it didn’t move the story forward and it would have cost a ton of money, so all of the action takes place on Yavin 4.”

Chris Weitz: “At one point, Jyn was already a rebel soldier. We toyed with various other possibilities: that she was a deserter, that she was a Rey-like scavenger, but obviously you can’t do that when you learn what the other hand of the Star Wars universe is doing.”

Chris Weitz: “This was one of the things John Knoll said they could do, and they sort of built the parachute as they were falling. One interesting thing about it is that obviously you can’t scan Peter Cushing, but what John explained to me that they were able to do was take shots from the original Star Wars and unused takes and treat when he would turn in a shot as though it were their version of a 3D scan.”

Gary Whitta: “When I first wrote Tarkin into the movie, I wrote him like he was always in shadow. I was trying to give ILM as much wiggle room as possible. He didn’t have a lot of dialogue. He wasn’t in the movie a lot. They eventually wrote him into the movie way more and gave him much more dialogue because ILM were confident that they could really do it…Peter Cushing was in a movie called Top Secret, the Val Kilmer movie from the 1980s. For that movie, Peter Cushing had to be fitted with a prosthetic, because there’s a visual gag where he has a huge eye. So they took a mold of his face, a 3D sculpture of his head. John found that sculpt, sitting on someone’s shelf in a prop workshop for decades. He found it, brought it to ILM, 3D scanned it, and that ended up being part of how they recreated Peter Cushing’s face for Tarkin.”

Chris Weitz: “The first version of him – my great sadness in life is that on the cutting room floor is a Bor Gullet who’s a memory trader. He lives on memories, and he especially delights in traumatic memories. They’re more delicious to him. There was, at one point, kind of a space Hannibal Lecter scene where Bor Gullet made Jyn trade her traumatic memories for information that she wanted. That is all I have to say. It makes me sad that’s it not in there, and yet I understand.”

Continue Reading What We Learned from the Rogue One Commentary >>