Star Wars Bits: Quest of the Jedi, The Merry Rise of Skywalker, 365 Days of Star Wars Women, and More!

Devoted to interviews with the cast, crew, and creators from the Star Wars universe, the Talking Bay 94 podcast offers never-before-heard stories from background aliens to some of the biggest stars in the universe.

This week, join host Brandon Wainerdi as he sits down with Industrial Light & Magic Visual Effects Supervisor and Second Unit Director Roger Guyett. Nominated for six Academy Awards — Harry Potter and the Prisoner of Azkaban, Star Trek, Star Trek Into Darkness, Star Wars: The Force Awakens, Ready Player One, and Star Wars: The Rise of Skywalker — Guyett talks about his journey to that galaxy far, far away which began with 2005’s Star Wars: Episode III – Revenge of the Sith.

Listen for discussions on sand snakes, Maz Kanata, Millennium Falcon chases, and filming on location. It’s a great companion piece to the documentary, The Skywalker Legacy, found on the Digital HD, 4K Ultra HD, Blu-ray, and DVD releases of The Rise of Skywalker.

While you’re at it, check out Brandon’s recent chat with Steve Sansweet, Chairman and President of Rancho Obi-Wan and former Fan Relations advisor for Lucasfilm!

Head on over to her site for an interview with Star Wars Icons: Han Solo author Gina McIntyre, who also wrote Guillermo del Toro’s The Shape of Water: Creating a Fairy Tale for Troubled Times, The Art of Ready Player One, and Little Women: The Official Movie Companion.

Other recent interviews include a conversation with Debs Paterson, director of the aforementioned documentary, The Skywalker Legacy, as well as Charmaine Chan, visual effects real-time operator on The Mandalorian and digital compositor on Star Wars: Episode VIII – The Last Jedi.

William Shakespeare’s The Merry Rise of Skywalker by Ian Doescher, coming July 28, is the final installment in Doescher’s nine-book Star Wars-as-Shakespeare series, which reimagines the Skywalker Saga as a Shakespearean drama, complete with authentic meter and verse.

Head over to StarWars.com for an exclusive excerpt of the upcoming book, in which Kylo Ren rampages through Mustafar and soon arrives on Exegol, where he comes face to face with the Emperor — all presented in Shakespeare’s classic style and theatrical dialogue.

Blast Points Podcast hosts Jason Gibner and Gabe Bott have generated a ton of hilarious and mind-blowing content to keep us entertained during the quarantine. In Episode 215 – Time and Star Wars (Does Anyone Really Know What Time It Is?), the duo goes through the saga and count the days in an attempt to solve the ancient mystery of how time works in the Star Wars universe.

In Episode 214 – The Phantom Toys, Jason and Gabe explore the legend of The Epic Continues, a proposed 1986 expansion of Kenner’s Power of the Force action figure line. The expansion would feature original characters and vehicles, stemming from a post-Return of the Jedi plotline conceived by Kenner designers.

Following up Episode 214, check out BONUS EPISODE – Kenner Toy Commercial Commentary for 40 minutes of non-stop classic Kenner Star Wars toy commercial bliss featuring Yoda hand puppets, Bossk, and Micro Collection madness! You can sync up the podcast with the commercials and follow along with all the fun here:

Speaking of commentaries, BONUS EPISODE – Quest of the Jedi Commentary provides a loving and lively deep-dive into David Zaritsky feature-length fan film, Quest of the Jedi. A relic of the ’90s, this spiritual successor to The Thrawn Trilogy — dubbed Episode X — features Tusken Raiders, Admiral Ackbar, Boba Fett, Death Troopers, Jaina Solo, and all kinds of Expanded Universe insanity. You’ve got to see this thing to believe it!

Since its debut in 1977, Star Wars has revolutionized the way we watch movies, interact with our heroes, and express our fandom. From the feature films to animation, books, games, comics, and more, there’s an entry point for every generation.

Unique, heartwarming, and funny, Looking For Leia is a seven-part docu-series about women as well as non-binary fans who found identity, connection, and purpose in their love of the galaxy far, far away. Acquired by SYFY WIRE, you can watch all seven episodes online right now!

Star Wars: The Clone Wars – Stories of Light and Dark

See Star Wars: The Clone Wars – Stories of Light and Dark and more on This Week! In Star Wars:

YouTube user Jackson McKay has created a kick-ass video tribute to X-Wing pilots. Lock S-foils in attack position and shove it into overdrive, because we’re headed to the Danger Zone! Using footage from the saga, this awesome montage is set to Kenny Loggins’ “Danger Zone” — the hit single from the Top Gun soundtrack— and takes us higher, further, faster into that galaxy far, far away.

Star Wars Galaxy of Adventures is a series of animated shorts, which you can check out at StarWarsKids.com and the Star Wars Kids YouTube channel, that reimagines some of the saga’s greatest moments and characters. Check out the latest episode below, which features Kylo Ren and the Knights of Ren go up against a small group of daring Resistance fighters!

On Skytalkers, diehard Star Wars fans Charlotte Errity and Caitlin Plesher talk about pressing and existing topics in the Star Wars universe in a comprehensive, three-part format. In their latest episode, The Clone Wars: Siege of Mandalore Part I, Caitlin and Charlotte discuss “Old Friends Not Forgotten,” the first episode in the 4-part Siege of Mandalore arc, which serves as the series finale of The Clone Wars. Join the duo as they dive into character emotions, story implications, and so much more!

Speaking of The Clone Wars, go behind the scenes of “Old Friends Not Forgotten” with executive producer Dave Filoni and other cast and crew, as they discuss the beginning of the siege of Mandalore:

For all you Animal Crossing: New Horizons fans out there, there are some very talented designers creating Star Wars outfits and designs for in-game use. First up, Twitter user @StarWarsAC is paying tribute to the Mos Eisley Cantina with costumes for Greedo, Walrus Man, Snaggletooth, Bo Shek, Han Solo, and more! He’s also got a pretty legit Noa Briqualon (Wilford Brimley’s character from Ewoks: The Battle for Endor) too! You can also find his work on Instagram, and be sure to check out all his designs with the code MA-4097-3103-0491.

Equally impressive is the output of Dobes from the island of Aeaea output. They’ve created a bunch of Animal Crossing Star Wars designs, including a whole wardrobe of Padmé Amidala, Rey, and Leia outfits! Check out their designs using the code MA-3341-3427-0800. 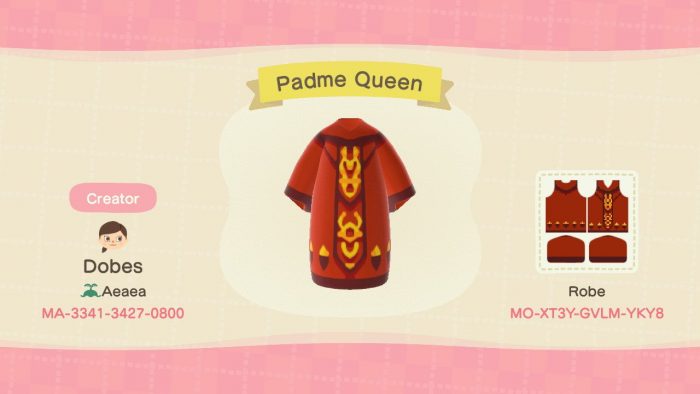 And finally, Alex at Star Wars Explained is back with a new video that examines all the elements that make up the perfect Star Wars space battle.

The post Star Wars Bits: Quest of the Jedi, The Merry Rise of Skywalker, 365 Days of Star Wars Women, and More! appeared first on /Film.

Previous post The Quarantine Stream: ‘The Lighthouse’ is the Perfect Claustrophobic Cautionary Tale For Our Times