During the heyday of ABC’s Lost, actor Paul Scheer (The League, Black Monday) was such a fan of the show that he became the go-to host for events surr.. 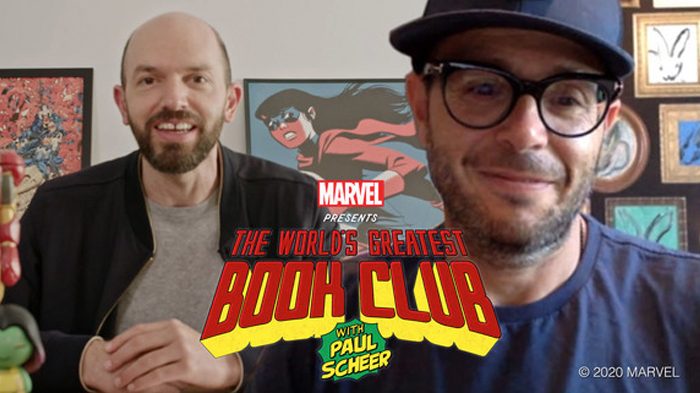 During the heyday of ABC’s Lost, actor Paul Scheer (The League, Black Monday) was such a fan of the show that he became the go-to host for events surrounding the mystery series. (He was on the ground floor during the launch of the Lost art show which catapulted Gallery1988 to fame.) Now Scheer is hosting a brand new digital series called The World’s Greatest Book Club for Marvel Comics, and he’s cashed in on that long-time fandom and landed Lost co-creator Damon Lindelof as the show’s first guest. Check out the debut episode below.

Co-hosted by Stephen Wacker, the Head of Content for Marvel New Media, this six-episode weekly series celebrates your favorite comics and the community around them. One member of that community is Damon Lindelof, who, in addition to his credits on shows like Lost, The Leftovers, and Watchmen, wrote 2005’s Ultimate Hulk vs. Wolverine #1. Scheer himself also has plenty of experience writing Marvel comics, so it’s not like these are just famous fans giving their outsider perspectives – they’ve been inside the machine, too.

Upcoming episodes will feature guest spots by Community actress Gillian Jacobs, who, like Scheer, directs an episode of Marvel’s 616 for Disney+; TV personality W. Kamau Bell, who has written about his love of Marvel in the past; Phil Lord, one of the writer/directors of Spider-Man: Into the Spider-Verse; comedian Yassir Lester, who pretty much lost his mind when he met famed Marvel writer Chris Claremont; and Scheer’s How Did This Get Made podcast co-host Jason Mantzoukas, who once wrote a Deadpool comic for the company.

So while Fox’s New Mutants movie might never see the light of day (kidding…maybe?), you can at least listen to Scheer, Wacker, and Lindelof discuss The New Mutants comic in the episode above.

Here’s a snippet from a press release revealing some more information about the show:

For fans, comic shops have and always will be the heart of the comic book community; a place for new and longtime fans to come together and share their passion, fandom, and appreciation for the artform while learning about something new. As a lifelong lover of Marvel comics, Scheer will look to capture some of that comic shop experience by diving into the personal origin stories with comics and beyond with each guest in the series. Which local comic shop is their go-to, and why is it their favorite? What’s the best comic or storyline of all time that we all need to read? How has reading comics changed their lives?

New episodes drop on Thursdays, so subscribe to that channel to make sure you don’t miss any of the remaining five episodes.