Disney Gallery: The Mandalorian continues to provide fascinating insights into the making of the first live-action Star Wars series. One aspect of the..

Disney Gallery: The Mandalorian continues to provide fascinating insights into the making of the first live-action Star Wars series. One aspect of the production we’ve covered previously was the innovative Stagecraft technology used to create immersive virtual environments in real time and in-camera, rather than the standard green screen technology that requires background visual effects to be added in post-production. This technology, referred to as The Volume by the cast and crew, is one of the most amazing innovations in filmmaking technology in recent years. But as the fourth episode of The Mandalorian documentary series revealed, it’s also something Star Wars creator George Lucas wanted to do himself nearly a decade ago.

The fourth episode of Disney Gallery: The Mandalorian shines a light on The Volume from the perspective of visual effects artists who worked with it, the directors who utilized it on set, and the actors who were floored by how much it helped them be immersed in a scene together. But it’s executive producer Jon Favreau who guides us through his own journey to make The Volume a reality.

The beginning of the episode features Favreau tracking the inception of the technology that would come to be known as The Volume. It started on The Jungle Book when blue screen, motion capture performance and visual effects were used to create an almost entirely digital environment along with computer animated, photorealistic animals, all surrounding a single human actor playing Mowgli. In order to make this look as good as possible, Favreau utilized video panels that created interactive light. Using this tool, shadows and lighting changes that would happen in real life, as if an elephant was walking in front of Mowgli, didn’t need to be added digitally (and usually unconvincingly) in post-production.

Favreau then took that experience with him to The Lion King remake, where the technology went one step further. Instead of shooting with a bunch of blue screen, real sets, and motion capture technology, they used a video game engine to create a computer generated environment in which they controlled camera movement through VR technology. But this was a production where everything was created with visual effects. How could this technology be utilized for live-action filmmaking?

That brings us to The Mandalorian, where Favreau was finally able to realize his dream of shooting in a virtual environment in a live-action space where the visuals surrounding the actors changed in real time as the camera moved around them. That’s the technology called The Volume, which also uses a video game engine to render environments in real time for the cameras shooting on set. We’re just beginning to see how it’s going to change filmmaking as we know it, but someone else had the idea first. 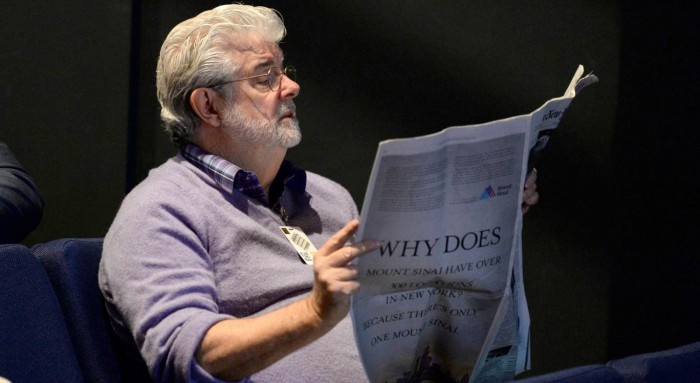 George Lucas Had the Idea for The Volume a Decade Ago

Before Jon Favreau was able to finally work with Lucasfilm to crack The Volume, it was an idea that George Lucas had hoped to implement roughly a decade earlier.

In this episode of The Mandalorian documentary series, first season director Bryce Dallas Howard remembers having a conversation with George Lucas about 20 years ago when he told her that one day in future people would be able to make movies like Star Wars in their garage. He believed locations created with visual effects could look just as real as an on-location shoot. Lucas even intended on realizing that dream himself, as revealed by Kathleen Kennedy in one of the episode’s roundtable discussions.

Back in the early 2010s, George Lucas made a bid to expand the reach of the motion picture facility known as Skywalker Ranch with a 269,000-square-foot complex that would include a 51-foot-tall, mission-style compound with two 85-foot towers, two indoor sound stages and a large outdoor stage. The expansion known as The Grady Ranch project would have generated hundreds of high-paying jobs and tax revenue, but unfortunately, a bunch of rich snobs got in the way.

Lucas intended to break ground on the studio in 2013, but in April of 2012, he withdrew his bid after local homeowners strongly opposed the project based on the presumed increase in traffic and noise, not to mention throwing in claims of environmental damage in order to make it seem like they cared about something other than themselves. The outcry resulted in George Lucas abandoning the project.

Rumor has it that this is where George Lucas intended to produce what would have been the first live-action Star Wars series, Star Wars: Underworld, utilizing state-of-the-art technology to make a live-action Star Wars series affordable. There were also rumblings that his plans for a Star Wars sequel trilogy, which we’ve only ever briefly heard about from Lucas himself, would have unfolded at this facility too. Unfortunately, after the studio plan fell apart, he sold Lucasfilm to Disney six months later, and the rest is (ongoing) history.

Could George Lucas have changed filmmaking again if he was able to build this studio? Would the technology 10 years ago have been capable of realizing George Lucas’ dream? It’s hard to say. Like James Cameron, Lucas has always been a filmmaker whose ideas require new technology to be innovated in order to be fully realized, and I have no doubt that he would have at least advanced the technology of the time. But now history will name The Mandalorian as the first production to use real time rendering and in-camera set extensions and effects through video walls. The technology is so convincing that a smoke effect within one of the video walls of the virtual set tricked a crew member into thinking there was a fire. That’s pretty damn impressive.

Even though there isn’t a lot of trivia to learn from the fourth episode of Disney Gallery: The Mandalorian, the best thing about the episode is the footage of the set showing The Volume in action. It’s actually kind of trippy seeing the video walls change with camera movement, especially during the finale scenes were the main characters are on a boat in a lava river, but the environment is shifting around them to create the illusion of movement.

The fourth episode of Disney Gallery: The Mandalorian is available on Disney+ now.

Next post ‘The Alienist’ Season 2 Trailer: The 19th Century Detectives Are Back to Investigate Mysterious Kidnappings