DC FanDome Unveils Interactive Schedule: Here Are the Panels You Need to Know About

If you’re a fan of DC Comics, the DC Extended Universe, and/or The CW’s Arrowverse of TV shows, clear your schedule for Saturday, August 22, 2020. DC..

If you’re a fan of DC Comics, the DC Extended Universe, and/or The CW’s Arrowverse of TV shows, clear your schedule for Saturday, August 22, 2020.

DC FanDome, Warner Bros.’ upcoming event celebrating all things DC Comics-related, has released its complete schedule for the entire event, and it’s full of panels dedicated to huge movies like The Batman, Wonder Woman 1984, and Black Adam, and tons of shows ranging from The Flash to the animated Harley Quinn series. Find out how to build your own customizable, interactive schedule for the event, and see which panels we’re most interested in below.

The full schedule can be accessible at this website, where you can create your own profile and build out your own schedule based on what you’re interested in, and you can change the time zone at the top of the page to reflect where you are in the world. It looks like all of the major panels (and maybe even every panel across the board) will be broadcast at two different times: a debut time, and then an encore hours later.

There are over 100 hours of unique content across the six virtual areas you can visit during the event, including the five “Verses” (InsiderVerse, KidsVerse, etc.) and the Hall of Heroes, the latter of which will be the home for almost all of the major panels that /Film readers will primarily care about. That’s not to say there isn’t plenty of interesting stuff elsewhere – I recommend devoting some time to clicking around the schedule and reading all about it for yourselves – but the Hall of Heroes houses all of the big movie-related panels. Here’s our breakdown of what we think will be the biggest panels of the convention. 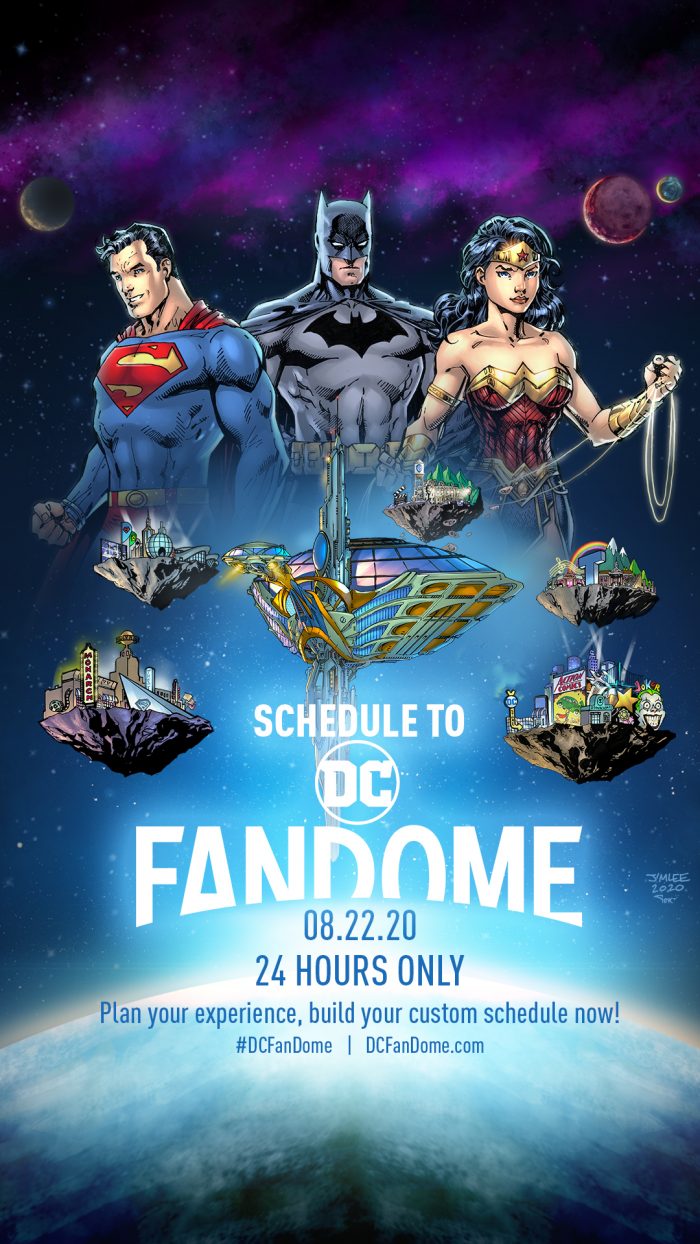 Wonder Woman 1984 stars Gal Gadot, Chris Pine, Kristen Wiig and Pedro Pascal, and director/co-writer/producer Patty Jenkins join forces with Brazilian hosts Érico Borgo and Aline Diniz to celebrate the fans in a big way. They will answer questions from fans from all over the world, talk fan art and cosplay, and reveal an all-new sneak peek at the upcoming film — plus a few more surprises! 25 min

Gamers! You won’t want to miss this first look at an exciting new game, and Q&A with its developers. 20 min

Neil Gaiman, Dirk Maggs, G. Willow Wilson and Michael Sheen discuss the legacy of The Sandman comic book series and how it has been expanded with new stories, adapted into new mediums, and enthralled audiences around the world. 30 min

This 101-style conversation with The Flash filmmakers Andy Muschietti and Barbara Muschietti, star Ezra Miller and screenwriter Christina Hodson will give fans a speedy rundown on the first-ever Flash feature film. 10 min

What else would you expect from The Suicide Squad but the ultimate elimination game? First up, writer/director James Gunn takes on fan questions, then brings out Task Force X for a fast-paced, no-holds-barred Squad Showdown that tests every team member’s Squad knowledge — and survival skills! 30 min

Zack Snyder fields questions from fans and a few surprise guests as he discusses his eagerly awaited upcoming cut of the 2017 feature film and the movement that made it happen. 25 min

Star of the first-ever Black Adam feature film Dwayne Johnson sets the stage for the story and tone of the new movie with a fans-first Q&A…and a few surprises. 15 min

Aquaman director James Wan and King Orm himself, Patrick Wilson, take a deep dive into the world of Atlantis that Wan created, revealing their favorite behind-the-scenes moments from the largest DC movie ever! 10 min

As an Amazon and a god, Wonder Woman is truly timeless. So, it’s hard to believe she’s turning 80! Join Wonder Woman 1984 director Patty Jenkins and star Gal Gadot, along with a very special guest, as they reflect on the character’s influence on them personally, and look forward to the 2021 celebrations! 5 min

Zac Levi and the cast can’t tell you s#&t! Sworn to secrecy on the new script for their upcoming movie, Zac and a few of his SHAZAM! castmates talk with the Philippines’ #1 DC fan, Gino Quillamor, about what the next movie might be about, while commenting on everything from panels to the other Zack’s cut — and even have a few surprise guests drop in! 10 min

The Batman filmmaker Matt Reeves joins host and self-professed fangirl Aisha Tyler for a discussion of the upcoming film…with a surprise (or two) for the fans! 30 min

The post DC FanDome Unveils Interactive Schedule: Here Are the Panels You Need to Know About appeared first on /Film.

Next post The Quarantine Stream: Chloe Ting’s Fitness Vlogs Are Great for Beginners Looking to Shed That Quarantine 15

Previous post The Morning Watch: Hidden Details of ‘Scott Pilgrim vs the World’, Why Rick Deckard Can’t Be a Replicant & More