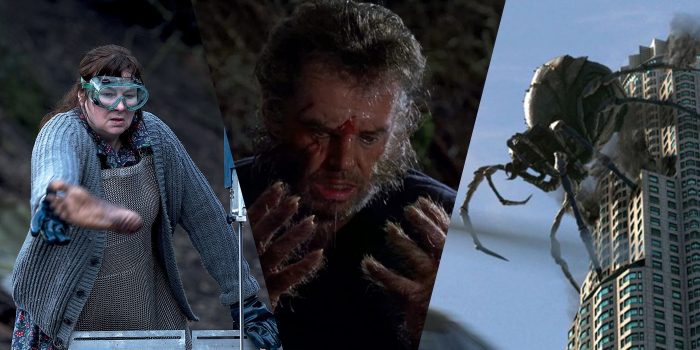 Matt: Chris’ generosity overfloweth this week since it was his idea to curate a list of streaming horror recommendations based only on free services. While there are multiple, from IMDB TV to Kanopy, I’ve decided to focus on Tubi in particular. You’d imagine a no-pay service to offer limited selections, but Tubi boasts a rather expansive and deep genre catalog. You’ll scroll past must-sees from Train To Busan to Hellraiser, so I’ve probed a bit farther to highlight few personally approved underseen titles. Embrace the Halloween spirit by broadening your spooky horizons!

Chris: We’re always trying to think of fun little themes here at the Now Scream This offices, and what’s more fun than free? That’s right – there are free streaming services out there, and some of them have some good stuff! There’s a catch, of course – they’re ad-based, which means that you’re going to get commercial breaks. But that’s not such a bad thing. Think of it like the old days, when networks would broadcast a movie every week. The commercial arrives, you get up and get a sandwich. Simple. And did I mention it’s free?

Matt: Gateway horror comes in many forms, depending on the age of viewers. In recent memory, the Jack Black property Goosebumps is one of my favorite introduce-the-kiddies flicks. For those a bit older and can handle grimmer fates or gory practical effects? Steven C. Miller’s Under The Bed stands out as children must battle a boogeyman from where the title states. A little bit of Joe Dante, a little bit of Wes Craven, but a lot of heart from a more adolescent mindset still treats its viewers as horror fans. It’s a film of two halves, but I think they piece together quite nicely. You can’t have the safety-shredding third act without building a brotherly and family bond worth empathy before demonic chaos erupts.

Chris: I’m just going to be up front here: I haven’t seen any of the movies Matt lists this week. None of them. This is what I get for thinking of a fun theme like this.

Matt: While many credit their love of French Extremism for horror awakenings, the same films are frequently mentioned. Martyrs. High Tension. The usual suspects (not the movie, duh). The subgenre is, as you’d expect, so much richer than the signature references. Take Franck Richard’s The Pack (La Meute), an ode to folklore horror, insane Saw-ish traps, and slasher deaths punctuated by undead hordes. A dash of The Texas Chain Saw Massacre given how the film’s “evil” family runs a rest stop eatery where they abduct their victims, and where these blank-faced demons emerge when summoned. It’s all very backwoodsy, ambitious, and gleefully grotesque once survivors start fighting both psychopaths and the supernatural. I wish more people would talk about this one – starting with you!

Chris: Remember when I said above I hadn’t seen any of these? Yep, still true.

Matt: Shameless plug time! I co-host a podcast titled Certified Forgotten (Spotify, Apple), where myself and co-host (and /Film contributor) Matt Monagle chat about “forgotten” horror films of the Rotten Tomatoes era; titles with five-or-less critic reviews that are due for a “rediscovery” (brought to us by a new guest every episode). Dead Mary came our way thanks to YouTuber and filmmaker Zena Dixon, which was such a noteworthy find. A movie not on my radar, that ended up winning us over as an Evil Dead riff where thirtysomethings confront their existential problems within the context of cabin-in-the-woods horror versus the usual twentysomethings who just party and fornicate until death. I urge y’all not to let this one remain…wait for it…certified forgotten.

The Possession Of Michael King

Matt: Found footage will forever be the bastard spawn equivalent of a horror subgenre. Too bad those counter-outers are missing on so many uniquely disturbing titles, such as David Jung’s The Possession Of Michael King. The titular Michael (Shane Johnson) dares to disprove the paranormal’s existence by allowing his own possession after bum psychic advice leads to the death of his wife. One of the few times provoking dark corners makes sense – the whole, “why would you mess with an Ouiji board, dumbass” syndrome – because it’s rooted in emotional tragedy. Jung’s usage of found footage exemplifies how personal and effective first-person scares can be leveled when executed at high levels, and Shane Johnson’s performance is captivating given the material. I’m always waiting for this one to find a more vocal crowd.

Chris: Oh shit, wait! I actually have seen this one! And I remember enjoying it!

Matt: As a self-proclaimed spider avoider (no hate, we’re just better apart), I can’t explain my gravitation towards goofy arachnid cinema. Big Ass Spider! is one of those B-movies that balances itself between SYFY and Roger Corman. Said “Big Ass Spider” is computerized, no practical, but that’s fine given Greg Grunberg’s everyday exterminator hero, who adores playing in this infested world. Lin Shaye and Ray Wise show up, Los Angelinos are devoured, and antics are proficiently zany. Also, no joke, that opening reverse-slow-motion opening to Storm Large’s haunting vocal rendition of “Where Is My Mind” could be one of my favorite beginnings to a movie. Mike Mendez hits that midnighter sweet spot, and I’m still entangled in its sticky web.

Chris: Okay, we’re back to not having seen stuff again.