Since the United States was lucky enough to get Disney+ original shows like The Mandalorian before most of the rest of the world, it’s only fair that .. 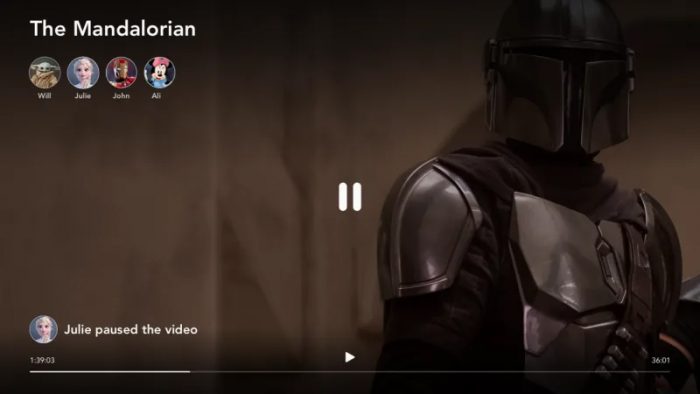 Since the United States was lucky enough to get Disney+ original shows like The Mandalorian before most of the rest of the world, it’s only fair that we had to wait a little bit to get the new watch party feature that has been kicking around Canada, Australia, and New Zealand recently. But the wait is over, as Disney+ has announced that their new GroupWatch feature is launching on the streaming service today, giving subscribers the chance to watch a movie or TV show virtually with their friends online. However, at launch, it won’t be quite as sophisticated as some of the other watch party features out there.

Engadget and Gizmodo brought our attention to the Disney+ watch party feature launching today. GroupWatch, as it’s called, will allow users to watch any movie or TV show in the Disney+ library on desktop, mobile, streaming devices, and smart TVs with up to six other people. That includes Premier Access titles like Mulan, but everyone in the GroupWatch needs to have already purchased access to those movies to enjoy. However, the watch links used to invite people to GroupWatch must originate from the web or mobile versions of Disney+, and that’s how they must be accepted too. Don’t worry though, because after you send out invites or are invited to GroupWatch from your computer or phone, Disney+ will ask if you want to switch to a bigger screen for a better viewing experience.

Unfortunately, right out of the gate, GroupWatch won’t allow much interaction between viewers. A chat function will not be available at launch, but viewers will be able to react by way of six emojis (like, funny, sad, angry, scared and surprised). It’s not clear when a chat function might become available, but without that feature, the GroupWatch option feels rather lackluster. Sure, you can just have a group text open with your friends, and Disney+ makes it easier for everyone to be in sync with each other while watching (anyone can pause, reward, or fast forward the shared stream, which will also adjust for bandwith issues), but it sounds like Disney+ rushed this feature out.

If your kid wants to partake in a GroupWatch, it won’t be available through the Kids profile, so they’ll have to do it through the primary account. That’s good though, because this way you don’t have to worry about your kid getting an invite from your weird cousin who just wants to watch Mufasa get killed in The Lion King over and over again.

Though this feature feels half-baked, at least it will allow for friends to watch the second season of The Mandalorian together, not to mention Marvel’s WandaVision series. That way you can all discuss your theories after every new episode debuts, which is probably what we’ll be doing on SlashFilm Daily, just as we did with the first season. So stay tuned for that starting after the first episode on October 30.

The post Disney+ is Finally Getting a Watch Party Feature in the United States appeared first on /Film.

Next post First Look: ‘Unmatched: Buffy the Vampire Slayer’ Brings One of the Greatest TV Shows of All Time to Your Table – and It’s Available Right Now