Cool Stuff: Let ‘The Mummy’ Wrap Itself Around Your Record Collection As a New Spinature

The Universal Monsters line of Spinatures from Waxwork Records continues to expand. It began with Frankenstein and the incredible likeness of Boris Ka..

The Universal Monsters line of Spinatures from Waxwork Records continues to expand. It began with Frankenstein and the incredible likeness of Boris Karloff as the titular doctor’s monster, and now the likeness of the iconic horror actor is returning in the form of another monster: The Mummy.

Waxwork Records is released The Mummy Spinature collectible for pre-order today, just in time for you to get wrapped up in holiday shopping. Inspired by the classic 1932 movie, it has the signature monster with his arms folded across the chest, as if he’s just been awakened from his tomb. 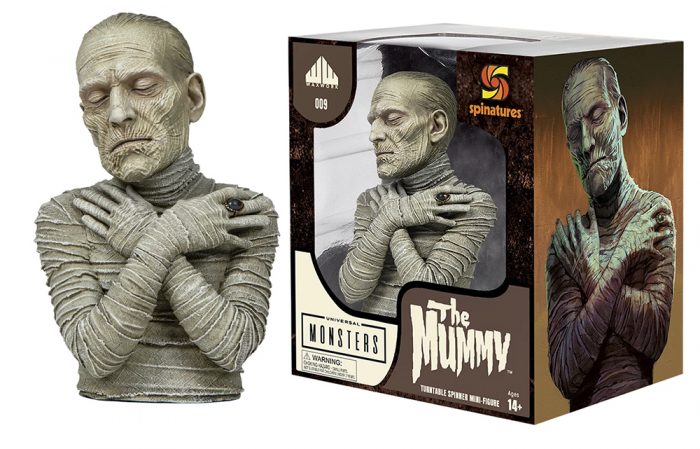 The Mummy Spinature is yet another impressively detailed mini bust, and you can really see it in the wrinkles of the monster’s face and the tatters of his bandages. For being only 4-inches tall, they’re surprisingly well-crafted and high quality.

What’s great about these Spinatures is that even if you don’t have a record player, the mini busts can just be displayed on your shelf or desk. At just $25, they’re pretty reasonably priced for fans to keep building their collection without breaking their bank.

The Mummy joins a a couple of other Universal Monsters Spinatures, including the aforementioned Frankenstein, as as well as The Bride of Frankenstein. But Waxwork Records intends on releasing many more, including The Invisible Man, The Creature from the Black Lagoon, Dracula, and The Phantom of the Opera. Stay tuned to see when those will be released in the coming weeks.

The post Cool Stuff: Let ‘The Mummy’ Wrap Itself Around Your Record Collection As a New Spinature appeared first on /Film.