If you love watching reheated versions of old intellectual property, it seems like you are going to absolutely lose your mind for Paramount+, the soon..

If you love watching reheated versions of old intellectual property, it seems like you are going to absolutely lose your mind for Paramount+, the soon-to-launch streaming service from ViacomCBS. During an Investor Day presentation, the company backed up a metaphorical dump truck and unloaded a metric ton of Paramount+ TV shows, including the fact that they’re developing TV versions of films like The Italian Job, Fatal Attraction, and The Parallax View, as well as revivals of Frasier, Yo! MTV Raps (yes, seriously), Inside Amy Schumer, Rugrats, and more. Find out what’s coming to the service below.

There were so many Paramount+ announcements this afternoon that they were honestly a bit difficult to keep track of, but I’m going to try my best to round up the biggest announcements as succinctly as possible here. I’ve broken this into sections, but there was one pesky announcement that didn’t fit squarely into any of my categories: the seventh and final season of Younger will premiere on Paramount+ this spring before it hits TV Land. With that out of the way, let’s get started.

In addition to shows like a Grease prequel, a series about the making of The Godfather, and a TV version of The Man Who Fell to Earth, Paramount+ has picked up several shows to series, including Love Story, Flashdance, The Italian Job, Fatal Attraction, and The Parallax View. All of those are based on Paramount movies.

A TV version of Love Story, based on the mega-popular Ali MacGraw/Ryan O’Neil romance drama, hails from Josh Schwartz and Stephanie Savage (The O.C., Gossip Girl), who are “beyond excited to update it for the next generation.”

Flashdance is based on the Jennifer Beals-starring film; Tracy McMillan (Amazon’s Good Girls Revolt) wrote the revival, which “will again focus on a Black woman struggling to make her mark in the ballet world and will pick up from where the story left off — but in present day.”

The Italian Job is a sequel to the Michael Caine heist film from 1969, which was remade in 2003 as a Mark Wahlberg/Charlize Theron vehicle. This sequel show “revolves around the grandchildren of the legendary Charlie Croker (Caine in the original) who inherit his old safety deposit box and reignite the quest for the infamous Italian bullion.” Matt Wheeler (Hawaii Five-0) is behind this new version.

Fatal Attraction is being referred to as a “deep-dive reimagining” of the Glenn Close/Michael Douglas movie, and it “will be told through the lens of modern attitudes when it comes to strong women, personality disorders, victim shaming and coercive control.” Alexandra Cunningham and Kevin Hynes, who were behind the Dirty John TV series, are writing and executive producing this reimagining.

The Parallax View is based on Alan J. Pakula’s paranoid political thriller from the 1970s that starred Warren Beatty, although no writer has been attached to a new version yet. Paula Wagner, Tom Cruise’s former producing partner, is on board as an executive producer.

I’ll group all of the reality shows together in one paragraph: Paramount+ is working on revivals of MTV’s The Real World called The Real World Homecoming: New York (with the cast of Season 1 returning and shot in the same house as that season), The Challenge, Yo! MTV Raps, VH1 staple Behind the Music, and Unplugged.

We already heard about the Frasier revival, but that is now officially coming to the new streamer.

A Criminal Minds revival is in the early stages, with the streamer still figuring out which cast members from the original show would come back. Longtime showrunner and executive producer Erica Messer is expected to return behind the camera.

Inside Amy Schumer is coming back for five specials, since Schumer was still under contract to create more episodes when she left the Comedy Central show to make movies.

Reno: 911! The Hunt for QAnon, a continuation after the show was recently picked up by Quibi (which is now dead), is being described as a “supersized event” based on the original comedy series.

Mike Judge is coming back to make a new Beavis & Butt-Head movie for the streamer; he previously announced that he would be making more episodes of the animated series for Comedy Central.

A new special based on the Comedy Central series Workaholics has also been given the go-ahead, with original cast members Blake Anderson, Adam Devine, and Anders Holm reuniting with director/producer Kyle Newacheck.

The BET series The Game is coming back to “offer a modern-day examination of Black culture through the prism of pro football.”

#ParamountPlus is bringing back your favorite babies: The Rugrats. The new series features the original voice cast with an updated animation style. pic.twitter.com/2vmzPUhmXc

The original cast of Rugrats is coming back to reprise their roles in a new iteration of that series. Get a load of that new animation style – I imagine that’s going to take some getting used to for fans of the original, scratchy 2D aesthetic of the 1990s series.

Paramount+ is also working on a live-action incarnation of kid-friendly fave Dora the Explorer (no surprise there, considering Dora recently starred in a live-action movie of her own), as well as the first live-action iteration of the Nickelodeon staple The Fairly OddParents. 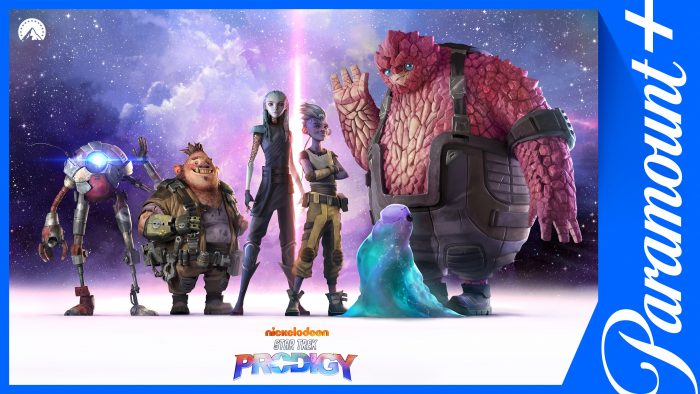 The presentation offered a new look at Star Trek: Prodigy, the new animated kids show that was originally set to debut on Nickelodeon. And while the series will still air on regular network television, it will debut first on Paramount+ before heading to Nick later. In the meantime, a new image arrived, teasing a look at the new bridge crew, which leans very heavily on alien and non-humanoid characters.

Are you an iCarly fan? Or are you old enough to have children and you want to transform them into iCarly fans? You’re in luck. A revival of the Nickelodeon series is coming to Paramount+.

We previously knew that the knew film SpongeBob SquarePants: Sponge on the Run and the new prequel series Kamp Koral: SpongeBob’s Under Years would be coming to Paramount+, but the streamer is doubling down on the ever-popular animated franchise. Paramount+ will launch with not only the new titles, but the complete SpongeBob library.

Dave Grohl from the Foo Fighters is directing a six-part series called From Cradle to Stage, which tells “stories of the special relationship between successful musicians and their moms.”

Kenya Barris, who created black-ish and #blackAF, will have a new show exclusive to the service that will debut at some point this year, but there are literally zero details about it other than that.

In a new series called Guilty Party, Kate Beckinsale will play “a journalist who gets in over her head by investigating a young woman in prison for murdering her husband.”

Paramount+ is launching a new anthology series called American Tragedy, which, in the wake of Paramount Network’s mini-series Waco, will explore “complicated moments in true crime” in each season.

This isn’t exactly “new,” but it’s new-ish, and that’s good enough for today: Paramount+ will be the home of Y: 1883, a prequel to Taylor Sheridan‘s hit series Yellowstone which will track “the Dutton family as they embark on a journey west through the Great Plains toward the last bastion of untamed America,” and be a “stark retelling of Western expansion, and an intense study of one family fleeing poverty to seek a better future in America’s promised land — Montana.”

Speaking of Sheridan, the Hell or High Water screenwriter also has a new show coming to the streamer called Mayor of Kingstown that will star Jeremy Renner. It follows “the McLusky family – power brokers in Kingstown, Michigan where the business of incarceration is the only thriving industry. Tackling themes of systemic racism, corruption and inequality, the series provides a stark look at their attempt to bring order and justice to a town that has neither.”

He’s not done yet: he also has yet a Yellowstone spin-off called 6666, which is about a ranch that was founded “when Comanches still ruled West Texas” and still operates as it did two centuries before. The ranch is “where the rule of law and the laws of nature merge in a place where the most dangerous thing one does is the next thing…The 6666 is synonymous with the merciless endeavor to raise the finest horses and livestock in the world, and ultimately where world class cowboys are born and made.”

And there’s one more Sheridan project in the works: Land Man, which is “set in the proverbial boomtowns of West Texas” and is “a modern day tale of fortune seeking in the world of oil rigs. The series is an upstairs/downstairs story of roughnecks and wildcat billionaires fueling a boom so big, it’s reshaping our climate, our economy and our geopolitics.”

Trevor Noah will host The Weekly Show With Trevor Noah, which has gotten an initial six-episode run and will “explore stories across the societal landscape and talk with people behind the headlines.”