The rumor mill pegs filming on Lucasfilm's hotly-anticipated "The Mandalorian" season 3 beginning as early as next week in Manhattan Beach Studio.. 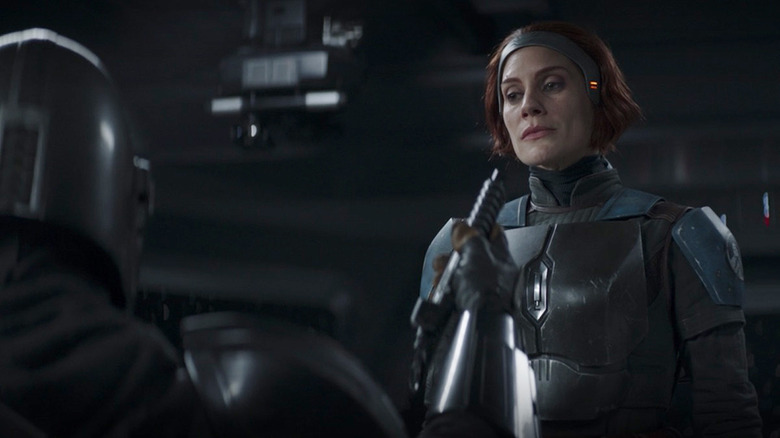 The rumor mill pegs filming on Lucasfilm's hotly-anticipated "The Mandalorian" season 3 beginning as early as next week in Manhattan Beach Studios and continuing through March. With production ramping up, the intense speculation can begin… Will we see Grogu and Luke Skywalker training? How will it tie into the spin-off series "The Book of Boba Fett" that just completed shooting? But the biggest question has to be the "unfinished business" between title hero Din Djarin (Pedro Pascal) and Katee Sackhoff's rival Mandalorian warrior Bo-Katan Kryze, the latter of whom was last seen coveting the Darksaber from the former. You see, her culture demands she defeat him in battle to win it back. Uh, oh.

Luckily, /Film just had a great conversation with Sackhoff for Warner Bros.' forthcoming animated version of George Romero's 1968 classic "Night of the Living Dead" titled "Night of the Animated Dead," which drops in stores next week on September 21. Look for our full interview shortly! During the conversation she discussed the possibilities of said "unfinished" Star Wars-related business…

"The way that Lucasfilm left me in season 2, one of the roads that could be gone down — absolutely, you'd think — would be the unfinished business," Sackhoff told us. "But that is so far above my pay grade, and you just don't know, right? As a fan of the show, I'm just excited to see what they come up with." 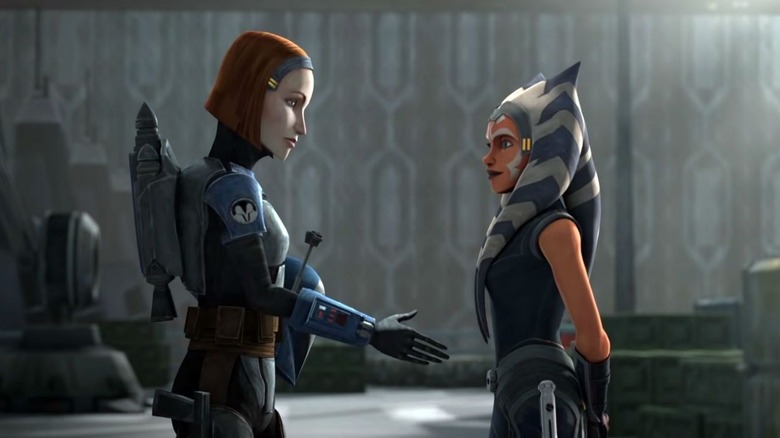 One of the most interesting aspects of "The Mandalorian" season 2 was that when Bo-Katan was re-introduced (in live-action form), she served as Din Djarin's stepping stone to former Jedi Ahsoka Tano (Roasario Dawson). This was more than just a simple referral. It's indicative that in the years after the events of series "The Clone Wars," which saw them defeating Darth Maul together during the Siege of Mandalore, the two of them kept in contact. To what extent and how close they still are remains to be seen, but Sackhoff told us that she and executive producer Dave Filoni had many discussions about this very thing:

"Dave and I talk a lot about Bo and her backstory and time lost and things like that, just because we enjoy talking about Star Wars and the characters. I definitely know a lot about who she is and where she's been and what's happened. So, yeah, I knew that kind of stuff for sure."

With event television like "The Book of Boba Fett," "Obi-Wan Kenobi," a third season of "The Mandalorian," and a full-on "Ahsoka" series starring Dawson all in concurrent development at Disney+, there are many possibilities to see Bo and Ahsoka's paths cross once again. Sackhoff seemed particularly keyed up for such a live-action re-team, especially since she and Dawson have both done amazing work in HIV and AIDS advocacy through amfAR. Sackhoff even recently did some livestreamed Star Wars gaming to fundraise for the organization.

"I'm a big fan of Rosario Dawson," Sackhoff said of a possible reunion:

"I've been watching her since I was very, very young. Well, we were both very, very young. We're the same age. She's been acting way longer than I have! I remember watching 'Kids' when I was young and just being absolutely blown away by not only their performances, but the subject matter. It changed the trajectory of a lot of my philanthropic work with amfAR. I love Rosario. I've never had the pleasure of meeting her. So maybe one of these days."

Previous post Warriors! Come Out To Play ... This New The Warriors Board Game