"Prisoners of the Ghostland" came burdened with promises of being "unlike anything" we've ever seen from Nicolas Cage before, a star (in)famously.. 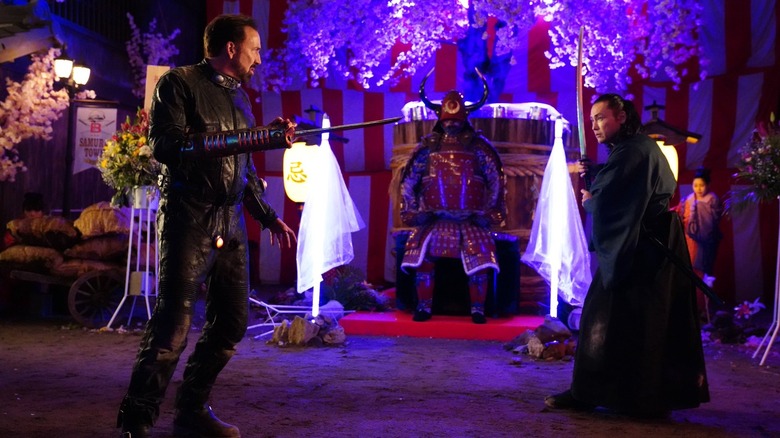 "Prisoners of the Ghostland" came burdened with promises of being "unlike anything" we've ever seen from Nicolas Cage before, a star (in)famously known for being unafraid to let it all hang out — in this particular instance, literally! — and risk looking foolish in his pursuit to give a movie exactly the jolt of manic energy it needs. After premiering at Sundance Film Festival earlier in the year to a somewhat mixed reception (our own Ben Pearson reviewed it here), the genre mashup finally released in theaters and on video on demand this past weekend. In 2021 alone, we've seen Nicolas Cage performances run the gamut from shockingly reserved and understated in the excellent "Pig," to a whirlwind of madcap zaniness in "Willy's Wonderland" and now "Prisoners of the Ghostland."

So does this live up to the hype as one of the deceptively gifted actor's more entertaining performances and, more importantly, does the movie itself match his efforts? Let's break down the ending of "Prisoners of the Ghostland" and find out. 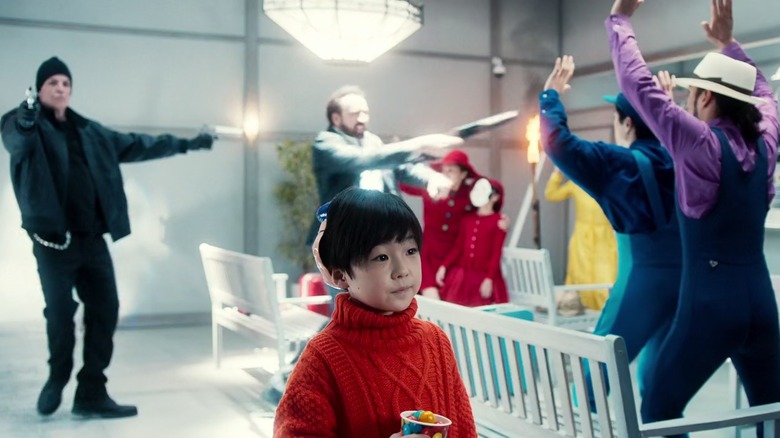 Part Western, part samurai film, part post-apocalyptic drama, Japanese filmmaker Sion Sono's English language debut starts off strong. The film throws viewers headfirst into the deep end and leaves it up to us to get acclimated with the distinctive and heightened world of "Prisoners of the Ghostland" — in far more convincing fashion than other 2021 films could, like "Jolt" or "Gunpowder Milkshake." A brightly lit and vibrant bank soon becomes the setting of a violent heist, with the tranquil atmosphere shattered by the sudden appearance of Nicolas Cage's unnamed robber and his unstable partner, appropriately referred to as "Psycho" (Nick Cassavetes).

Though we only see the full and uninterrupted flashback later on, the combination of Psycho's coldblooded murder of an innocent young boy and Cage leaving his partner behind to save himself establishes the guilt that haunts Cage's character through the present day, years after the botched robbery. Now a prisoner of the sinister Governor (Bill Moseley) in a settlement called Samurai Town, Cage is paraded from his cell and through the streets for one last job and one last shot at redemption. He must rescue the Governor's adopted "granddaughter" Bernice (Sofia Boutella) — who ran away with her friends Susie (Yuzuka Nakaya) and Stella (Lorena Kotô) and is now feared to be a captive in the mysterious and dangerous Ghostland territory — or die in the attempt as he's locked inside a black leather suit laced with a handful of explosives to ensure his cooperation.

What follows is a string of increasingly strange and sometimes impenetrable episodic adventures, in which Cage's character (who is subsequently referred to as "Hero") is plagued by visions or nightmares of the "ghosts" that inhabit both his mind and the surrounding region. The ticking time clock of his mission means he can hardly afford any delay, but that's seemingly all that his journey amounts to. Even after locating Bernice in the wrecked husk of the Ghostland, her initial inability to talk throws another wrench into his rapidly dwindling allotment of time to bring her back — merely speaking her name into Hero's device on his wrist would buy the pair another crucial 48 hours to complete the task. 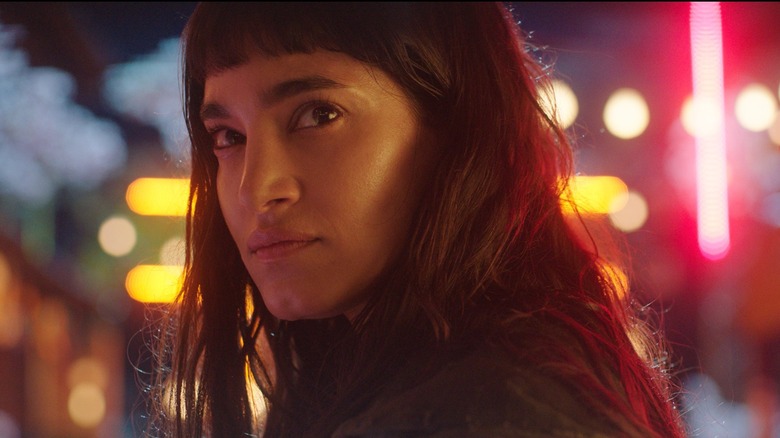 But when the ethereal ghosts accost the two yet again on their way back to Samurai Town, another nightmare triggers Hero's memory (though not before he inadvertently triggers an explosive in his suit and loses a testicle!) and he realizes that he's met Bernice before. She was only a little girl and an innocent bystander when Hero and Psycho attempted to hold up the bank, with their chaotic escape directly resulting in Bernice's mother dying and Bernice herself falling into the clutches of the Governor. With Bernice now shaken out of her unresponsive stupor and Hero finally deciding to live up to his moniker to atone for his past, the two inspire the wasted remains of the Ghostland camp to rise up against the Governor and set things straight — as straight as it can be, of course, in a world where nuclear war has apparently rendered humanity into little more than a "Mad Max" lifestyle with little hope of escape.

What follows is an ending battle in the streets of Samurai Town, heavy on hyper-stylized action and gore but with little room for character moments or even any signature Nicolas Cage antics. The duplicitous Governor heartily accepts Bernice's return but refuses to free Hero from his explosive constraints, unleashing a throwback standoff between Hero, the Governor's suddenly loyalty-divided executioner Yasujiro (Tak Sakaguchi), and a horde of the Governor's cowboy/samurai minions. Yasujiro, whose sister is also a victim of the Governor's predilection for young women, finally picks a side and helps save Bernice and Susie from her enemies. While Bernice fights off intruders and takes vengeance upon the Governor (though it's too little, too late, Sofia Boutella is finally allowed to show off the physicality that has made her such an appealing actor elsewhere), the somewhat begrudging respect between Hero and Yasujiro results in one final duel between the two, with Hero gaining the upper hand after Yasujiro's failed attempt at lulling his opponent into a false sense of security. With Samurai Town freed, the trio of Hero, Bernice, and Susie are able to take a well-deserved rest and look forward to a brighter future, for a change. 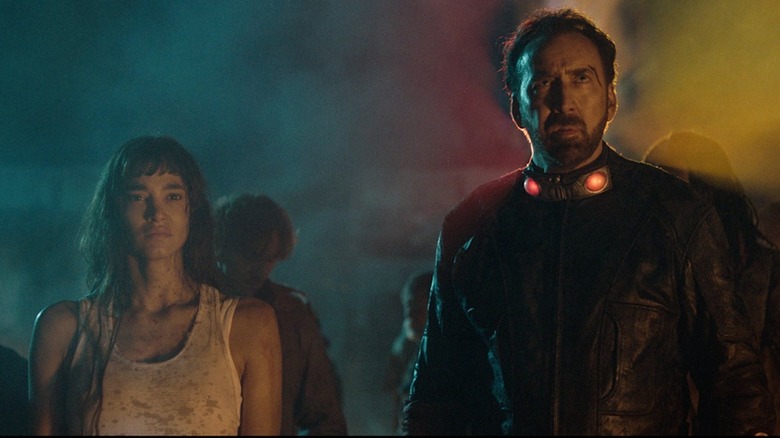 Unfortunately, by the third act of "Prisoners of the Ghostland," it's hard to avoid the sense of having treaded water to this point. Too often, too many characters have simply functioned as reactive elements in the midst of circumstances out of their control. This wreaks havoc on the pacing of the film, causing a relatively short 103 minute film to feel at least twice that long and leaving viewers to sit back on their heels rather than leaning forward in anticipation of the events to come.

When Hero and Bernice unite the fearful population of the Ghostland and make peace with the ghosts of the territory — who are revealed to have been victims of a cataclysmic event when a truck carrying nuclear waste collided with a bus full of sentenced convicts and prisoners, including Psycho — the passivity of almost everyone involved so far makes the turning point feel hollow and unmotivated. After all, the Governor's threat to the residents of the Ghostland is never clearly established in the first place and none of the oppressed people — even the war-ready "Ratman" (Young Dais) and his fascinating cultlike followers! — ever show up to help out during the final battle.

As a result, everyone outside of Hero, Bernice, and the Governor feels more like window dressing than a natural and integral part of the world. Bizarrely inspired touches, such as members of the Ghostland tying a rope to arms of the town clock to restrain it from moving forward, feel like gestures towards real-world parallels and heavy topics (in this case, the ever-ticking Doomsday Clock) but are devoid of the context needed to make it feel real in the film itself. Much of the film suffers from this problem, even down to Nicolas Cage's performance. Like the random songs that the residents of Samurai town break into early on or the very idea of mashing up the genres and inspirations that Sion Sono does here, Cage feels like he's playing individual notes without a corresponding harmony. In the end, "Prisoners of the Ghostland" squanders much of the potential it had going for it, somehow adding up to far less than the sum of its parts.

Read this next: 'Prisoners Of The Ghostland' Review: Nicolas Cage Gets Wild In This Heavily Stylized Genre Mashup [Sundance 2021]