The Alternate Ending In The Thing That Was Thankfully Cut

John Carpenter's "The Thing" is one of those classics that always gets cited as an example of a film that was an outward failure, initially, but .. 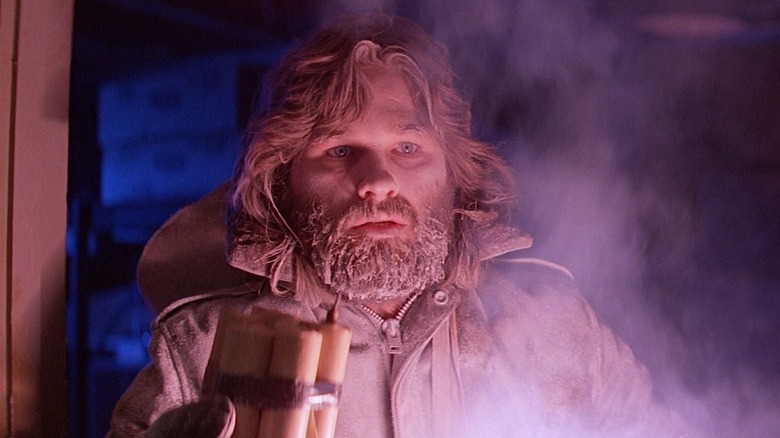 John Carpenter's "The Thing" is one of those classics that always gets cited as an example of a film that was an outward failure, initially, but that time has vindicated with a much-deserved reappraisal. It was not a critical or commercial success on its release, but in the years since then, it has come to be regarded as a monster movie par excellence.

Carpenter himself once said that his whole career would have been different had "The Thing" been a big hit. He was coming off "Escape from New York" and lower-budget horror films like "The Fog" and "Halloween" when he made it, and this was his first major studio feature.

"The Thing" opened in U.S. theaters on June 25, 1982, the same day as Ridley Scott's "Blade Runner," another science-fiction masterpiece that had a mixed reception at first. They were both competing with Steven Spielberg's "E.T. the Extra-Terrestrial," which was early into its record-breaking, 16-week run of #1 at the box office.

"The Thing," in particular, really went against the grain of "E.T." and the whole '80s blockbuster landscape, which was generally more hopeful and upbeat. Spielberg's film made its title alien lovable, whereas Carpenter turned his creature into an object of body horror.

Maybe part of the reason why audiences struggled with "The Thing" back in the day was because of its unhappy ending. That ending is classic and plays perfectly into the film's paranoid atmosphere, but we might have gotten one that was very different if some of Carpenter's collaborators had their way.

The Thing Could Have Ended In A Less Ambiguous Fashion

"The Thing" famously ends with MacReady (Kurt Russell) and Childs (Keith David), sharing an uneasy moment by the fire. Their Antarctic research station is burning to the ground and once the flames die down, they will freeze to death. They have no hope of rescue and they're also not sure if they can trust each other because one of them could be a shape-shifting monster. The Thing has already been shown as a writhing mass that can take on the form of humans or animals (or both, as evidenced by the human head that sprouts spider legs).

Den of Geek notes that Carpenter shot an epilogue, where MacReady escapes to another research station and takes a second blood test, proving he is human. This would have built on the first memorable blood test scene, where MacReady and the other men wait to see who among them is the alien in disguise. Yet it would have come at the expense of ambiguity, that feverish uncertainty that pervaded the character interactions throughout the whole movie.

Mental Floss cites editor Todd Ramsay as the catalyst for this epilogue. He was concerned that the other ending Carpenter had planned would not test well with audiences. Carpenter and editor Verna Fields also reportedly toyed with an ending that would have removed Childs from the equation altogether, leaving MacReady to sit by the fire alone.

In an interview with Deadline, Carpenter furthermore related how Sid Sheinberg, an executive at Universal Pictures, did a TV recut of "The Thing" without consulting him. This version, per IMDb, adds a voiceover and shows the Thing inhabiting a dog's body again, leaving the research station the way it came.

Ultimately, "The Thing" is about paranoia, and its open-ended conclusion — with MacReady and Childs resigned to their fate and distrustful of each other — works best the way it is.

Read this next: The 20 Best '80s Horror Movies Ranked

The post The Alternate Ending in The Thing That Was Thankfully Cut appeared first on /Film.