Zack Snyder's deeply held fever dream of an uber-fascist Superman murdering people by the score and obliterating folks with his scary laser eyes .. 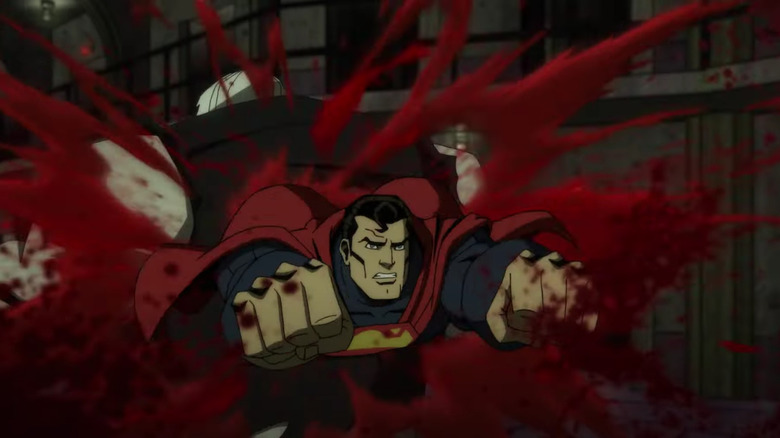 Zack Snyder's deeply held fever dream of an uber-fascist Superman murdering people by the score and obliterating folks with his scary laser eyes was heavily inspired by the 2013 video game "Injustice: Gods Among Us" and its comic book spin-offs. Now fans can see that terrifying "Knightmare" world glimpsed in "Batman v Superman" and "Zack Snyder's Justice League," brought to glorious blood-soaked life in a new red band trailer for "Injustice," Warner Bros. Animation's latest DC feature offering. Just wait until you see this thing… "Superman is a dick" indeed. Just be aware that the clip is super NSFW, as the animated film is rated R for "BLOODY VIOLENCE" and they mean it. 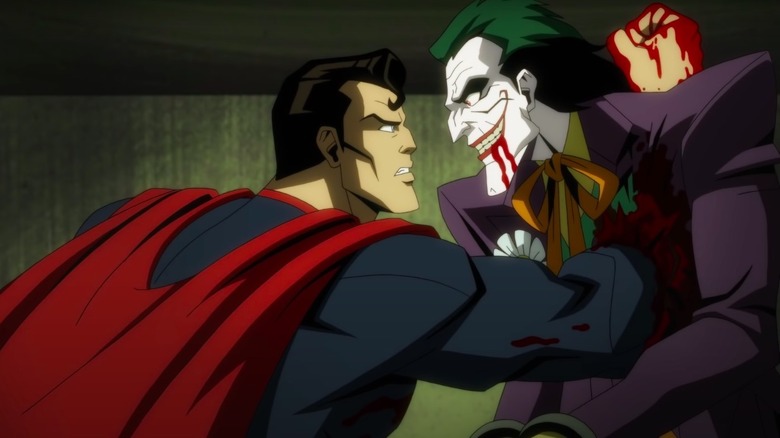 Because the "Injustice" red band trailer is NSFW, you can only watch it on YouTube. See it here.

Unlike the original Green Band "Injustice" promo, which you can check out here, this new one goes full-on with the gore, even recreating the famous comics panel where The Man of Steel punches his entire forearm through the Joker's body and rips his heart out. "Holy one-eight-seven, Batman!" Our symbol of Truth, Justice, and the American Way also makes a big splash, of a red sort, flying straight through poor Solomon Grundy during an Arkham Asylum breakout. Oh and he punches some fighter jets too. You know, like heroes do.

Inspired by 'Injustice: Gods Among Us,' NetherRealm Studios' popular video game, and the best-selling DC graphic novel based on the video game, Injustice: Gods Among Us: Year One by Tom Taylor, the animated film Injustice finds an alternate world gone mad – where The Joker has duped Superman into killing Lois Lane, sending the Man of Steel on a deadly rampage. Unhinged, Superman decides to take control of the Earth for humanity's own good. Determined to stop him, Batman creates a team of like-minded, freedom-fighting heroes. But when Super Heroes go to war, can the world survive?

Directed by Matt Peters ("Justice League Dark: Apokolips War") from a screenplay by Ernie Altbacker ("Batman: Hush"), "Injustice" is set to arrive on 4K, Blu-ray and Digital on October 19, 2021. You can pre-order your copy here, and be sure to check out our feature about upcoming DC animated movies to keep on your radar!

Read this next: Upcoming DC Animated Movies To Keep On Your Radar

Next post 14 Movie Roles Denzel Washington Should Have Turned Down