The first official clip from Marvel's "Eternals" has arrived, and it features sea monsters and sign language. When a winged murder dragon comes c.. 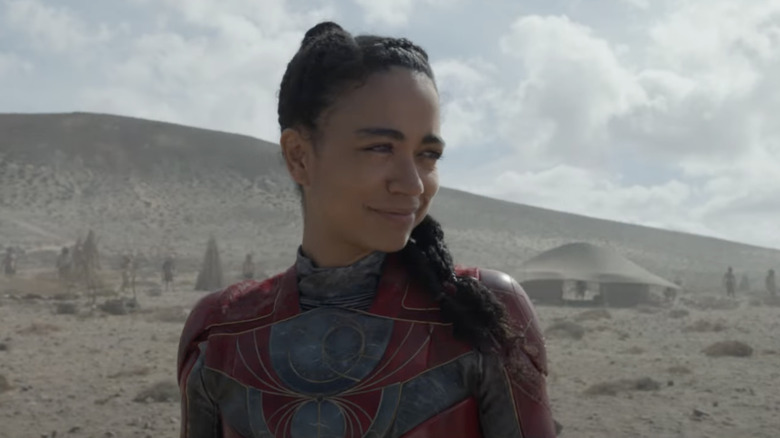 The first official clip from Marvel's "Eternals" has arrived, and it features sea monsters and sign language. When a winged murder dragon comes crawling out of the ocean, who's going to be there to save the prehistoric boy it wants to eat? Why, Earth's original superheroes, of course.

At 26 films and counting, you might think the Marvel Cinematic Universe has nothing new left to offer, but "Eternals" marks a number of firsts. It's the first MCU film helmed by an Oscar winner for Best Director — Chloé Zhao. It's also the first MCU film to receive a PG-13 rating for "brief sexuality," and it will introduce the first deaf superhero in the MCU.

Her name is Makkari, and she's played by Lauren Ridloff. In the clip below, you can see her and Kumail Nanjiani's character, Kingo, signing a bit as they come to the rescue.

As you can see — and as you can probably guess from their names — Makkari and Kingo aren't messing around. She has Flash-like super-speed, and apparently, enough super-strength to knock a huge monster off a sea cliff. He shoots energy blasts and orbs from his winning finger guns, while their fearless leader, Richard Madden's Ikaris, shoots energy beams out of his eyes like Superman or Cyclops.

According to MCU lore, the Eternals have been around for a good 7,000 years. They don't look a day over 6,000, but you might say their movie is an adventure 7,000 years in the making — not unlike "Jurassic Park," except younger and less prone to spitting poison on actors named Knight who have played characters named Nedry or Newman.

Personally, I can't help but think there's a big missed opportunity here. Why not go further back in time a full 65 million years and have the Eternals fighting dinosaurs? Maybe they could even tame some dinos, saddle them up, and ride around saving cavemen. They could start with the GEICO Caveman, who could be spun off into his own solo film and shared GEICO Cavemen universe.

"Following the events of Avengers: Endgame, an unexpected tragedy forces [the Eternals] out of the shadows to reunite against mankind's most ancient enemy, The Deviants."