Will There Be A Dune Part Two? Here’s What We Know 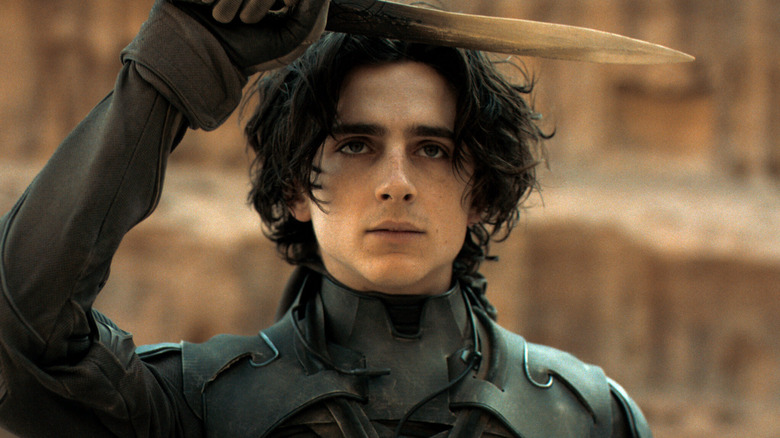 Denis Villeneuve's big movie adaptation of Frank Herbert's novel "Dune" has finally premiered, both in theaters and living rooms on HBO Max, and it's doing quite well. The sci-fi epic set a record for a Warner Bros. day-and-date release on HBO Max on top of its $40.1 million opening weekend at the domestic box office. But what does that mean for the prospects of part two? Let's break it down, because we all want to know what happens to everyone on Arrakis after Paul gets the spice a'flowin'.

Part Two Has Been Partially Confirmed 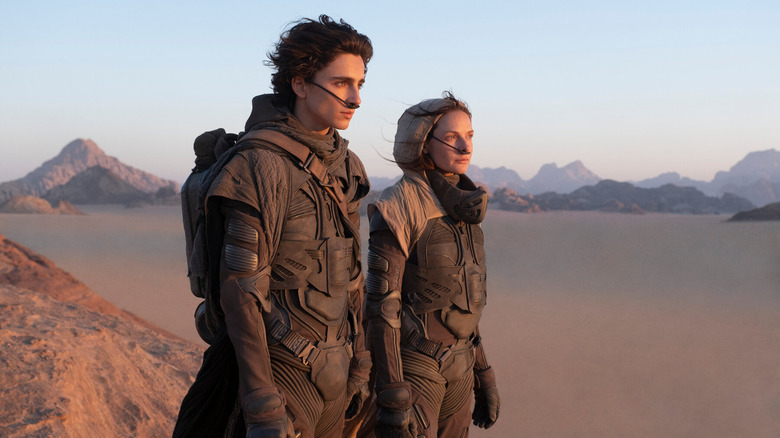 We still don't know if the folks at Warner Bros. consider "Dune" successful enough to merit a sequel yet, but the box office results are looking good. People were afraid that it might be too obscure and strange for wide audiences, much like Villeneuve's last film, "Blade Runner 2049." Thankfully, "Dune" had a bit more pop culture power behind it, and it's on track to do better than the "Blade Runner" sequel. So much so that the folks at WarnerMedia have all but confirmed a sequel.

During an interview about the prospects of a "Dune: Part 2," WarnerMedia Studios and Networks Chair and CEO Ann Sarnoff responded by telling folks to look to the movie's cliffhanger of an ending:

"Will we have a sequel to Dune? If you watch the movie you see how it ends. I think you pretty much know the answer to that."

WarnerMedia CEO Jason Kilar explained that the decision to do the sequel won't be based purely on box office numbers, but also on audience response. That means that everyone watching "Dune" at home did their part to show Warner Bros. they want to see more. Fans can either continue to support "Dune" by checking it out in theaters if they feel safe to do so, or by watching it on HBO Max on repeat.

The "Dune" Sequel Is "Ready To Go" 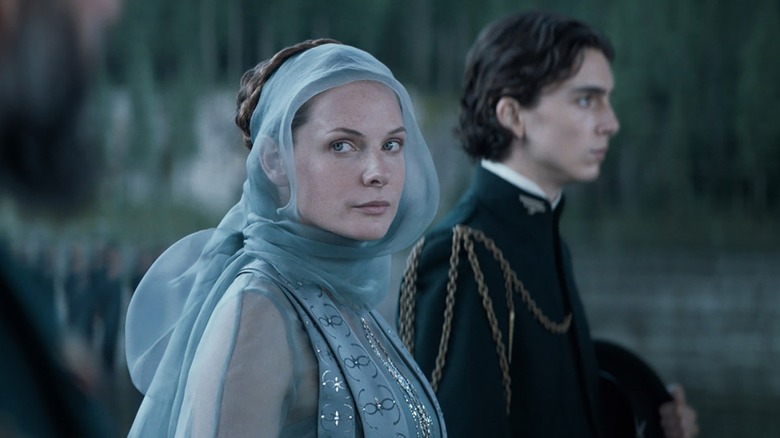 Villeneuve made "Part One" with "Part Two" in mind, which means that it's ready to go, at least on the pre-pre-production side of things.

In a roundtable interview attended by /Film, Villeneuve explained that he's ready to film the second half of Herbert's novel the moment he gets the go-ahead from the folks at Warner Bros.:

"When you make a movie in two parts, necessarily, when you do the first part you have to know what you're going to do in the second part. So I will say that I will be very ready to go quite quickly. To go quickly in a movie of that size you still need to make sets, costumes, so we are talking about months. But if ever there's enthusiasm and the movie is green lit sooner than later, I will say that I will be ready to shoot in 2022, for sure. 2022, for sure. I would love to because I am ready to go, and I will say that I would love to bring it to the screen as soon as possible."

He saved certain elements for the second half that came earlier in the book, in part because he wanted the first half to be a complete arc for Timothée Chalamet's character, Paul Atreides. Paul is the main protagonist of "Dune: Part One," but the focus would change significantly if "Part Two" gets made. 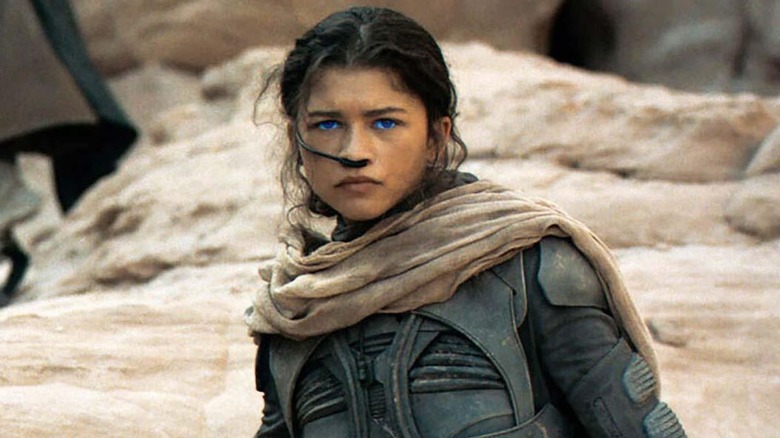 That's right, "Part Two" would focus heavily on Zendaya's character, Chani. In an interview promoting the first part, Villeneuve said that Zendaya is the primary protagonist in the sequel:

"Zendaya wanted to audition and today, after shooting the film and seeing what a wonderful actress she is, I'm sorry I auditioned her. It was just because I didn't know her. However that day, she impressed me and when she left the studio I knew that Chani was her, the young desert tiger. I am honored to present two such explosive talents on screen [Chalamet and Zendaya] and I can't wait to shoot the second part of Dune to get them back together. Knowing that in the next chapter Zendaya will be the protagonist of the story."

That's great, because Zendaya doesn't get much screen time in "Part One" and only got to be on set for seven days of filming. Zendaya is a monumental talent and it seems foolish to waste her, so knowing she'll get her chance to shine in the second half of the story is all good news.

Chani is a member of the Arrakis tribe known as Fremen, who ally with Paul after he and his mother are forced to flee into the desert. Paul is still a major character in the second half of Herbert's novel, so Chalamet isn't going anywhere, but the perspective will apparently make a big shift. 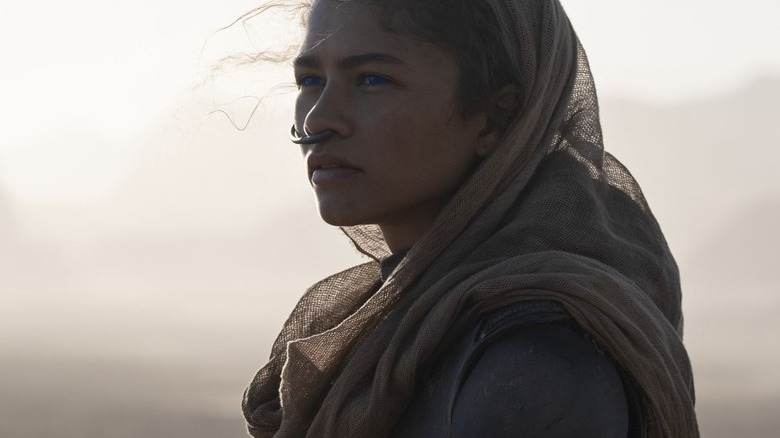 Speaking of the novel, it's worth pointing out that Villeneuve still has a lot of material to work with. Not only does he plan on making "Dune: Part Two," but he has plans to adapt its sequel, "Dune Messiah," as well. "Part One" is only his way of introducing the world to his vision of "Dune," and once it's established he will be able to really explore Herbert's incredible worldbuilding:

"The tough task [in 'Part One'] was to introduce you guys to this world, to the ideas, to the codes, to the cultures, the different families, the different planets. Once this is done it becomes an insane playground. So it will allow me to go berserk and really create … I should not say this but I will say that for me 'Dune: Part One' is like an appetizer. 'Dune: Part Two' is the main meal where we can add much more. That's what I can say. As much as "Dune: Part One" was by far my most exciting project ever, 'Dune: Part Two' is already getting me even more excited."

We have a full, very spoilery guide to what could potentially happen in "Dune: Part Two" based on the events of the novels, but it mostly revolves around Paul (and Chani and the rest of the Fremen) battling the Harkonnens. We'll get to meet a whole slew of baddies, including Padishah Emporer Shaddam IV, Princess Irulan, Feyd-Rautha, Iakin Nefud, and hopefully someone from the Spacing Guide. Count Hasimir Fenring, the Emperor's eunuch emissary and assassin, was missing from both "Part One" and the previous David Lynch adaptation of "Dune," so there's no telling whether or not he'll show up in "Part Two."

The women of "Dune" take on a much larger role in the second half as well, and HBO is even developing a spin-off series about the mysterious and magical Bene Gesserit.

There's no telling exactly when we'll get to see "Dune: Part Two," but it's looking like we will at least get to see it, which is a great thing for fans of sprawling desert epics everywhere.

Read this next: David Lynch's Feature Films Ranked From Worst To Best

The post Will There Be a Dune Part Two? Here's What We Know appeared first on /Film.