"The Mandalorian" and the special effects company Industrial Light and Magic wowed Hollywood by using the dynamic on-set production tool known as Stag.. 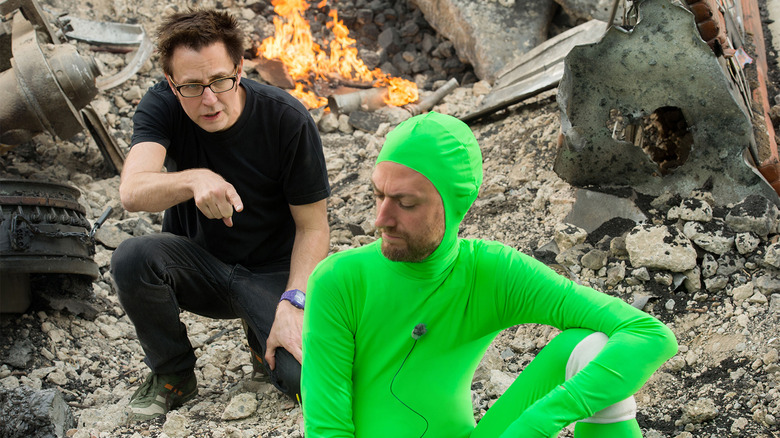 "The Mandalorian" and the special effects company Industrial Light and Magic wowed Hollywood by using the dynamic on-set production tool known as StageCraft to create real-time visual effects that extend sets virtually so that they immediately appear in-camera. Ever since then, the rest of the film industry has started to latch onto the technology too. Upcoming movies like "The Batman" and "Thor: Love & Thunder" are just some of the big blockbusters taking advantage of the innovative tech, but it sounds like StageCraft may not be a viable solution for every big blockbuster. For example, when director James Gunn was asked whether "Guardians of the Galaxy Vol. 3" would make use of the on-set technology, he explained why it wouldn't work for his cosmic comic book sequel.

Guardians Of The Galaxy Vol. 3 Won't Use StageCraft

In the post above from Twitter, James Gunn explained to a fan that the sets for "Guardians of the Galaxy Vol. 3" are too big for the technology. At first, that might seem counterintuitive for technology that was created to extend sets so that they can appear to be bigger than they otherwise would be if they were created practically. But since the technology requires an entire set to be encapsulated by giant video walls that can be changed with the click of a mouse or the push of a button, that can limit how big the on-set space can be for shooting. So it sounds like James Gunn may need more room on set for "Guardians of the Galaxy Vol. 3" than the StageCraft technology would allow.

If you've yet to see how the StageCraft technology works, here's a featurette from Industrial Light and Magic on the latest version used for the show's second season:

Initially I thought that the sets for "Guardians of the Galaxy Vol. 3" might require so much detail that it's simply easier to create them practically rather than spending so much pre-production time building these virtual sets with visual effects. Then I remembered just how intricate and detailed some of the virtual sets were in the second season of "The Mandalorian," such as the interior of Boba Fett's ship. So it's likely that Gunn merely requires more physical space for larger action sequences or sweeping camera movements that make using the StageCraft technology more cumbersome than helpful.

Another possibility is that James Gunn's sets require a little more physical interaction, which would also make the virtual technology not to helpful. If the characters in the film constantly need to interact with the physical environment, then it would still require practical elements to be built with the StageCraft screens surrounding them. So perhaps there are too many scenes that require an actual set to make the StageCraft technology a convenience rather than a hurdle.

Though StageCraft has become a valuable tool in the production of blockbusters, it's not a tool that will necessarily give a filmmaker everything they need from a set. Plus, there are likely plenty of filmmakers who may prefer working on a physical set, if only to make the environment feel more tangible. Even so, we're bound to see StageCraft used more and more as the technology evolves.

The post Why Guardians of the Galaxy Vol. 3 Won't Use StageCraft Technology, According to James Gunn appeared first on /Film.

Next post The Unforgivable Trailer: Sandra Bullock Is An Ex-Con Who Can't Escape Her Past