Whatever you want to call the Paul W.S. Anderson "Resident Evil" film series, I don't think you can accurately call it a series of horror films. .. 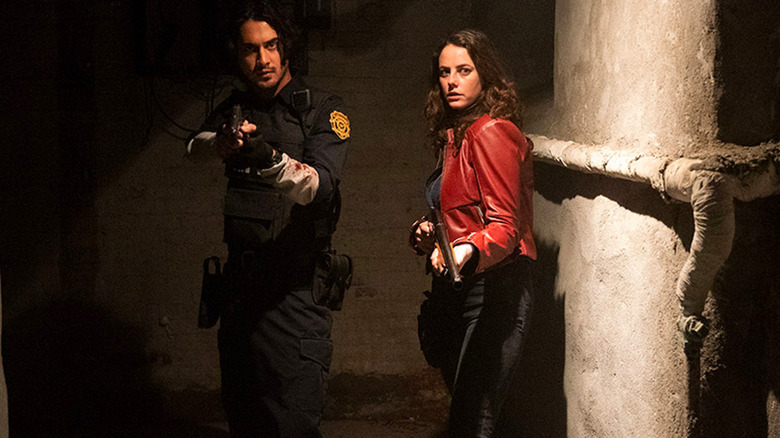 Whatever you want to call the Paul W.S. Anderson "Resident Evil" film series, I don't think you can accurately call it a series of horror films. Sure, there are plenty of horror elements in those movies — they're about zombies, after all — but at the end of the day, Anderson, no stranger to horror having helmed the excellent "Event Horizon," was more interested in action. As a result, Anderson's films were shoot-em-ups that allowed star Milla Jovovich to flip around in slow-motion like she was auditioning for "The Matrix." Another thing about Anderson's series: it wasn't very faithful to the games. Sure, there were elements of the various games peppered throughout the films, but fans wanted more.

With the reboot "Resident Evil: Welcome to Raccoon City," writer-director Johannes Roberts ("47 Meters Down," "Strangers: Prey at Night") hopes to return "Resident Evil" to its roots. The new film leans into its direct references from the games. More than that, it leans into horror. There are occasional bursts of gunfire here, but "Raccoon City" is a horror movie first, action movie second. And maybe that'll be enough for hardcore fans of the game who felt screwed over by Anderson's films.

But whatever the flaws of the previous "Resident Evil" series, those films were never as dull as "Raccoon City." Roberts doesn't seem to know how to milk anything resembling genuine horror out of the material here. Instead, he and cinematographer Maxime Alexandre seem to think "Dark=Scary!" is the only rule they need to follow. As a result, "Raccoon City" is smothered in almost impenetrable darkness. I get that the entire movie takes place during one rainy night, but there's a way to shoot such darkness and still have your imagery register. Instead, "Resident Evil: Welcome to Raccoon City" is often so murky it looks like the entire thing was filmed through a bowl of soup.

The Dream Of The '90s Is Alive In Raccoon City 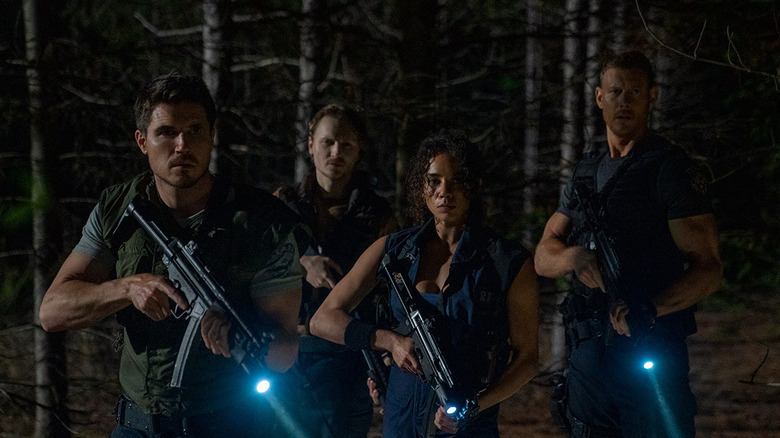 It's 1998, and Claire Redfield (Kaya Scodelario) is returning home to Raccoon City. She's not exactly thrilled about this — she only has bad memories of the place, especially of the orphanage she grow up in with her brother Chris (Robbie Amell). Claire and Chris haven't spoken in five years, but recently, Claire has heard stories about bad things going on in Raccoon City. These stories come from the internet — from a chatroom, specifically. And since it's 1998, the movie has Chris Redfield greet this news with a question: "What the f*** is a chatroom?" The '90s setting allows "Resident Evil" to cut down on means of communication — almost no one has a cell phone, and the one person who does only uses it to play the mobile game "Snake." Soon, when all the phone lines in town go down, the unlucky residents will be completely cut off.

Raccoon City was once home to the mighty pharmaceutical giant the Umbrella Corporation. But Umbrella is packing up and moving elsewhere — a decision that has caused many residents to flee, turning Raccoon City into something of a ghost town. But there's a big reason Umbrella is pulling up stakes: they've been conducting nefarious experiments, and those experiments have actually poisoned the town's water supply, to the point where most of the residents are now turning into zombie-like creatures hungry for flesh.

All of this happens just as Claire rolls into town, and while she tries to warn Chris, he doesn't believe her. Instead, he heads off to work as a Raccoon City cop, where he joins up with his fellow officers Jill Valentine (Hannah John-Kamen) and Albert Wesker (Tom Hopper). Also at the station: sleepy rookie Leon S. Kennedy (Avan Jogia), and Chief Irons, played by a very shouty Donal Logue. Jill, Chris, and Albert head off to investigate a report at the spooky Spencer Mansion, and that's when the sh*t really hits the fan. 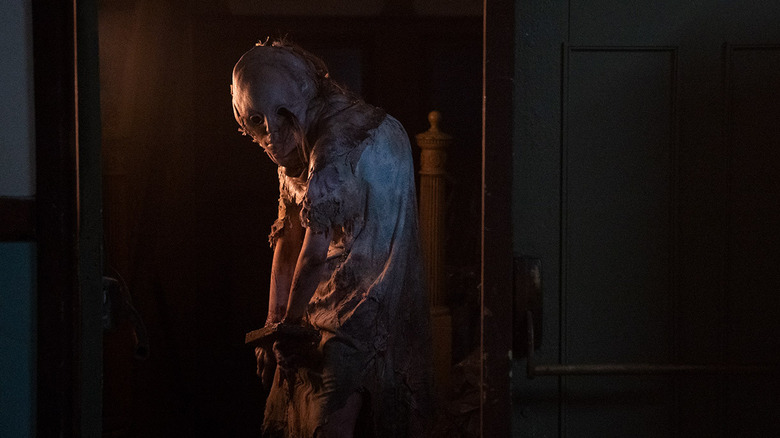 This basic set-up is fine, and you get the sense that Roberts is trying to channel John Carpenter movies like "Assault on Precinct 13" and "Prince of Darkness." Even the title cards that count down the hours of the night have a typeface that looks like the Albertus font Carpenter liked to use for his titles. Soon, Claire, Leon, and Irons are stuck at the station while Jill, Chris, and Albert navigate the mansion. Both locations are besieged by ghouls — screaming, gnashing zombies who all have receding hairlines for some reason. It's bad enough you turn into a zombie, but you have to go bald, too? Brutal.

And that's it, really. There's not much more to "Resident Evil: Welcome to Raccoon City." Simplicity is fine, in theory. After all, many of Carpenter's movies could be called simplistic. And yet, "Welcome to Raccoon City" ultimately feels undercooked, as if Roberts simply typed up a bunch of stuff from the games he wanted to see in the film and then forgot to write a story around them. There are flashbacks to Claire and Chris' childhood, where they were at the mercy of a creepy doctor (Neal McDonough). And there's an admittedly disturbing figure known as Lisa Trevor, who appears to be wearing someone's skinned face as a mask. But the film doesn't investigate these elements further. Perhaps if you're well-versed in the games you won't need any further info, but what about the rest of us? Someone, somewhere, is going to angrily proclaim that this is a movie just "for the fans." And I'm sorry, but that's the worst possible way to make a movie, and it's the type of thinking that's ruining modern Hollywood blockbusters.

Scodelario, who was so good in the incredibly enjoyable monster movie "Crawl," so much so that she pretty much carried that entire film on her shoulders, is unfortunately lost here. She seems bored, and I can't blame her: I was bored, too. It doesn't help that there's absolutely nothing to any of the characters. We have no real insight into who they are, or what makes them tick. Leon is … lazy, I guess? There are two different scenes where he sleeps through something that a normal person would never sleep through. Chief Irons yells a lot. Jill is good at shooting guns. Chris is … well, I have no idea. The most we learn about him is that he leaves a pile of dirty dishes in his sink. Oh, and he has a motorcycle. None of these characters make an impression, which makes it kind of hard to care if they're on the cusp of being torn apart by the walking dead. 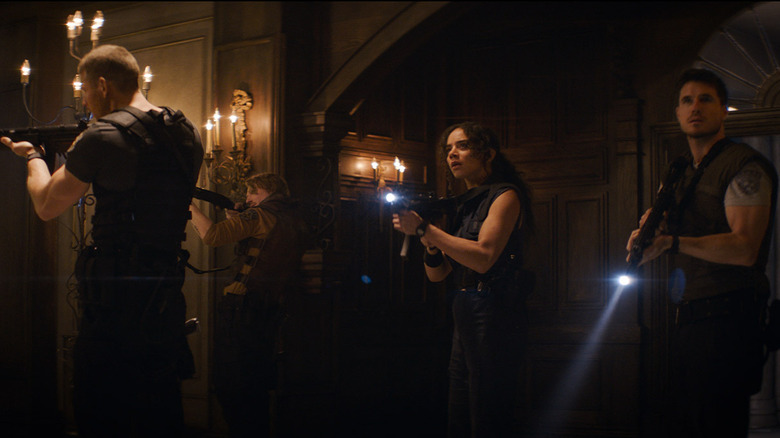 But again: maybe none of this will matter to hardcore fans of the games. Maybe they'll all nod and smile and say, "I understood that reference!" And maybe that's all movies are now. A series of winking nods and familiar references; one big stupid in-joke that you need to do homework to understand. Why make a movie that transcends boundaries when you can make one that says, "Hey, remember this thing? Here it is again. Now give us some money." Nothing is new anymore. Nothing is fresh. Everything is IP. Familiar, focus-group-tested, easily digested IP. We don't have movies now. We have content. Wall-to-wall content that threatens to suck us down into grey, formless sludge, turning our brains to jelly in the process. Hooray for Hollywood!

So, sure, if you want a bunch of familiar beats from the "Resident Evil" games rendered into scenes so underlit you can't make out what the hell is happening on the screen, then let me be the first to say, "Welcome to Raccoon City!" The film will go down easy and leave you completely unsatiated, so you can say, "Well, maybe this one was bad, but the next one will be better!" Because of course "Welcome to Raccoon City" ends with a set-up for a sequel. And if that sequel never happens, don't worry, we'll have another reboot in a few years and we'll get to do this dance all over again.

Johannes Roberts has talent. "47 Meters Down" is a fun bit of sharksploitation, and "Strangers: Prey at Night" is a stylish blast full of great slasher movie throwbacks, even if it feels completely different from the first "Strangers" movie. I have no doubt the director will move on to better things at some point, and I also have no doubt he entered "Resident Evil: Welcome to Raccoon City" with the best intentions. But none of that excuses such a pointless exercise as this.

The post Resident Evil: Welcome to Raccoon City Review: The Reboot Wisely Trades Action for Horror, But It's Not Enough appeared first on /Film.

Previous post Why Does The MCU Keep Returning To Christmas? Kevin Feige Explains