"Star Trek: Enterprise" -- originally just called "Enterprise," - was once considered by many Trekkies to be the black sheep of the pre-Abrams era. Wh.. 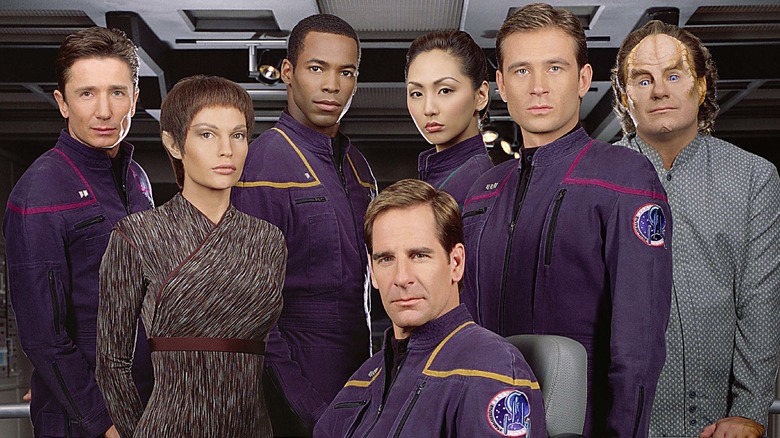 "Star Trek: Enterprise" — originally just called "Enterprise," – was once considered by many Trekkies to be the black sheep of the pre-Abrams era. While it still had many of the same creative people working behind the scenes (the show was created by longtime Trek honchos Rick Berman and Brannon Braga) it deliberately struck a different tone, exploring the early, raucous days of Starfleet: before the formation of the United Federation of Planets, before the writing of The Prime Directive, way back when there was only one Earth ship trekking through the cosmos. The goal was to create a Trek show that was less anodyne than its predecessors, recapturing some of the frontier spirit occasionally seen in the original 1966 TV series.

Other changes included an wholly updated aesthetic; the Enterprise looked a lot more like a submarine than a cruise ship, and the crew wore uniforms that looked a little bit like NASA jumpsuits. There were only two alien species aboard this time: Vulcan first officer T'Pol (Jolene Blalock) and the genial Dr. Phlox (John Billingsley), playing the previously unseen species of Denobulan. Additionally, the traditional orchestral opening of the previous five Trek TV shows was replaced by a truly, truly awful Rod Stewart ballad called "Faith of the Heart" a.k.a. "Where My Heart Will Take Me," sung by Russell "The Voice" Watson, written by Diane Warren, and originally included on the soundtrack to "Patch Adams."

"Enterprise" debuted in 2001 and was met with mixed reactions. Some critics, if recall is to be trusted, positively praised its production value and novelty, while others missed the reliable Trek iconography.

It's Been A Long Road… 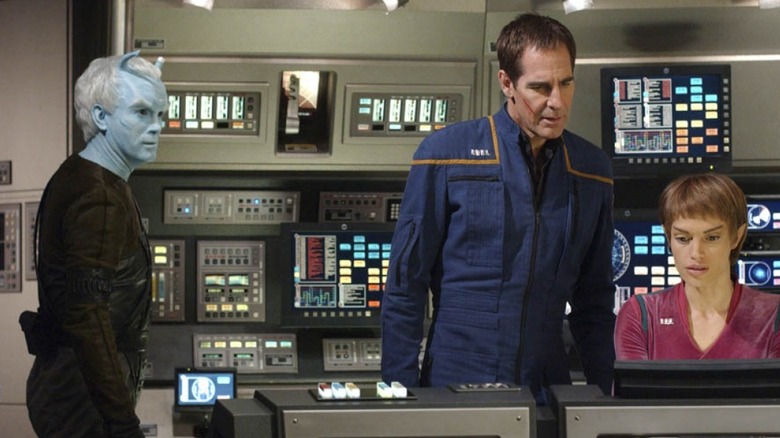 When it debuted in September of 2001, "Enterprise" struggled almost immediately. Fans weren't taking to the show in the same way they took to "Star Trek: Deep Space Nine" or "Star Trek: Voyager" as it was set in a new time frame which required a new push for audiences to refamiliarize themselves. What's more, it was the only Trek show on the air at the time, with "Voyager" having ended its run in May of the same year. Previous Trek shows had been doubling up, and it was the first time since 1993 there weren't at least two "Star Trek" shows on the air at the same time. "Enterprise" had a lot to prove.

Some of the early story arcs didn't play well to mythos-minded fans, and the Temporal Cold War story, featuring an evil species called the Suliban, is rarely brought up in conversation I have with other Trekkies. A little more attention is given to the Xindi who, in a story arc beginning in season 3, destroyed Florida in what was very clearly a 9/11 metaphor. Yes, check again the month and year of "Enterprise's" debut.

"Star Trek: Enterprise" season 4 introduced more multiple-episode arcs, and "Star Trek," along with most TV shows at the time, began to evolve into longer-form stories and season-long arcs rather than stand-alone mini moral dilemmas that had been Trek's stock in trade for decades. But the change was too little, too late, and "Enterprise" was canceled after an inauspicious four seasons. For comparison, "Star Trek: The Next Generation," "Deep Space Nine," and "Voyager" all ran for seven years each.

A pity, really, as some have said (anecdotally) that the show was just finding its feet.

Getting From There To Here 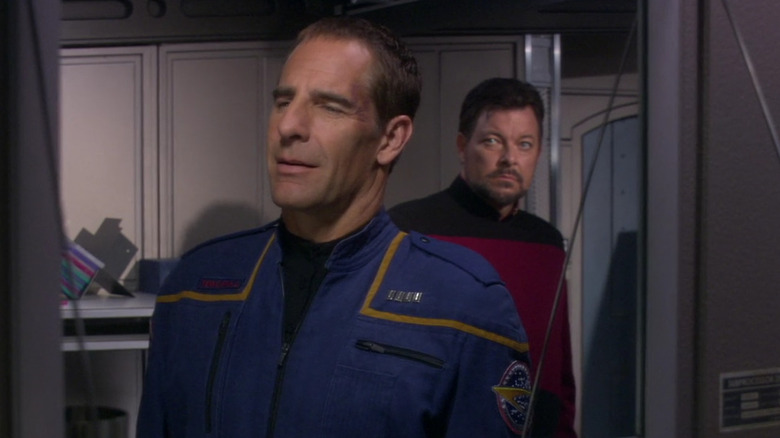 The final episode of "Enterprise" was … Well, it was an interesting choice. A big part of the appeal of "Enterprise" was its placement as a prequel to the original "Star Trek" series, meaning there was a mild thrill in seeing how certain things would come to be. This was, of course, after the same thing was being done with "Star Wars" starting with "The Phantom Menace" in 1999, but before "Batman Begins" pretty much popularized the "reimagined origin story" as a dominant storytelling trope throughout pop media. All of this is to say that "Enterprise" was meant to tie into what good Trekkies knew was coming in the future.

As such, the final episode of "Enterprise," titled "These Are the Voyages…" (originally aired on May 15th, 2005), had to rush to finally connect series back to the Treks were knew and loved. Enter Jonathan Frakes, Will Riker from "Star Trek: The Next Generation," a series that was set about 200 years after the events of "Enterprise." Rather than merely recite the official denouements of Capt. Jonathan Archer, T'Pol, Trip Tucker, Malcolm Reed, Hoshi Sato, Dr. Phlox, and the memorable, memorable character of Ensign Mayweather, we were given a broader view of "Enterprise" history as seen by William Riker, who was recreating life on the original "Enterprise" via a holodeck some 200 years after the fact.

In "These Are the Voyages…," Riker imagined himself as the hardworking galley chef on the original Enterprise, a character that was often talked about but never seen. As Riker envisioned it, the ship's chef served as a personal confidant to the crew, allowing him to have elaborate one-on-one discussion with each character. He also wanted to talk to the crew of the Enterprise shortly before the original ship was to be decommissioned, meaning the episode was also a flash-forward.

In short: "Enterprise" ended with a 200-year-old recreation of the future events of "Enterprise," as interpreted through the eyes of William T. Riker. The final episode of Trek was Mary Sue fanfic written by a Trek character. This is a nerd turducken of the highest order.

This approach, of course, allowed for a great deal of convenient historical fudging on the part of "Enterprise's" writers. If there was any sort of plot or character inconsistency, a viewer could chalk it up to Riker changing history to fit his own holodeck fantasy. More broadly, it was a comment on how we, as a species, tend to romanticize history, altering our past into heroic narratives and easy-to-consume stories rather than a complex timeline of daily events.

It's Been A Long Time 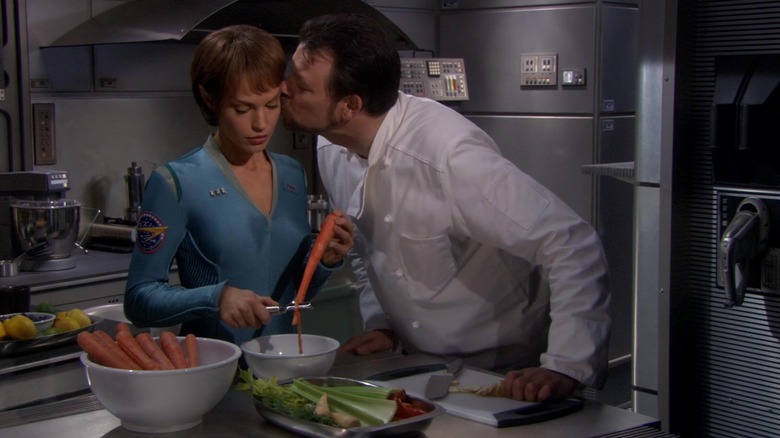 A bit of editorializing, if I may…

Reaction to "These Are the Voyages…" was largely negative. The inclusion of Riker, not to mention the eventual addition of NextGen's Counselor Troi (Marina Sirtis) robbed the "Enterprise" characters of their moment. While one can easily understand that the show's creators wanted to bring the timeline of "Enterprise" to a meaningful conclusion, skipping ahead in time and treating the show's events like a textbook column for other, different characters makes them feel distant and rarified, rather than exciting and immediate. Mild spoiler: The impersonal and abrupt death of one of the main cast members certainly didn't help either.

If one recalls the ending of "Star Trek: The Next Generation," it was made clear that the adventures of the Enterprise-D would continue — only without us, the audience, being able to see them all. A series needn't definitively conclude if we leave comforted that everything will work out fine for the characters. Perhaps a similar approach would have made for a better final episode of "Enterprise." Please, leave us with comforting send-off that would leave audiences assured that the cast would make it safely into Trek history, even if we don't get to see it.

That second approach would also open up the Trek "expanded universe." That is: Plenty of studio-mandated novels, source books, and speculative fiction writers could fill in any gaps that were left in the narrative. Indeed, given the historical element of "Enterprise," leaving gaps in history would be perfectly appropriate. Sadly, we were left with a final episode of Trek that left a bad taste in our mouths.

Maybe that's why so many audiences embraced the 2009 "Star Trek" feature film. It was an entirely new beverage, but at least it washed away the old one.

Now, where do we rant about the Paramount+ era?

The post Star Trek: Enterprise Ending Explained: Those Were The Voyages… appeared first on /Film.

Next post The Daily Stream: The Mitchells Vs. The Machines