"The Beatles: Get Back," Peter Jackson's eight-hour documentary that pieces together footage and audio recording during the making of the documen.. 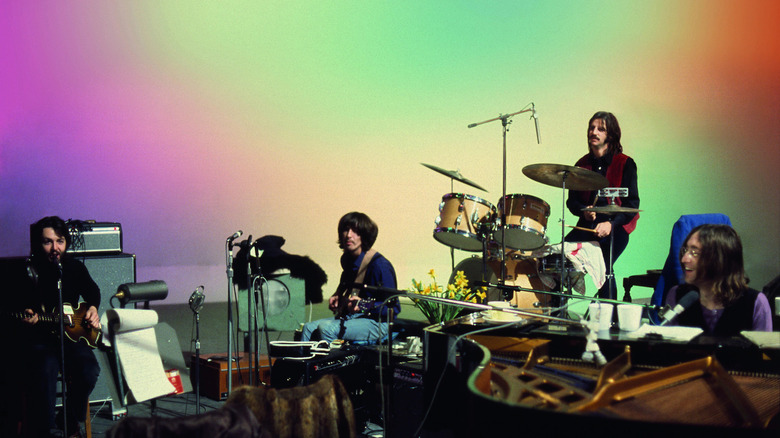 "The Beatles: Get Back," Peter Jackson's eight-hour documentary that pieces together footage and audio recording during the making of the documentary and album "Let It Be," absolutely rules. Even if you're not a huge Beatles fan there's something special about watching these four guys sit around creating music. Jackson and his team took great pains to remaster and restore the footage. Some people have actually taken issue with this – Jackson's work has, in some cases, created almost a motion-smoothing-type effect, and more than a few viewers have expressed a wish that Jackson had simply left the film's grain intact.

But Jackson made a deliberate choice here. The filmmaker wanted to create an experience that felt like the audience was literally in the studio with the Fab Four watching them work, and he felt that any presence of grain would break that illusion. Another thing that might've broken that illusion: bleeping out all the curse words. According to Jackson, Disney really wanted him to cut out all the swearing before the three-part docuseries aired on Disney+. But according to Jackson, it was the surviving Beatles themselves who shot down that idea.

That's How We Talked 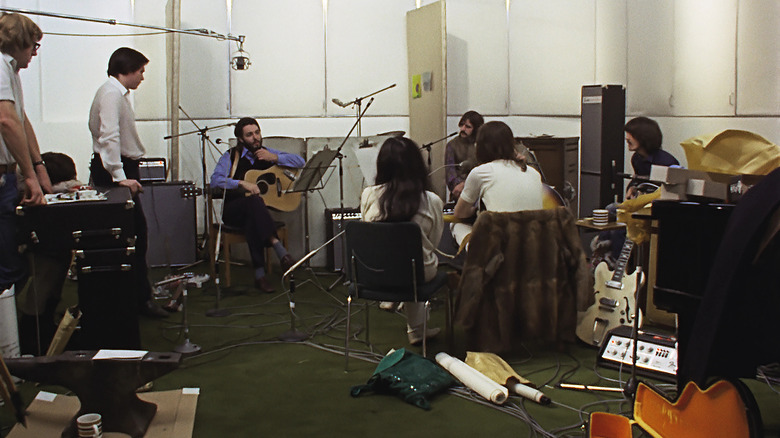 Disney likes to bathe itself in a family-friendly sheen, which means their original content shies away from anything too adult. When the filmed version of "Hamilton" came to Disney+, the majority of the curse words peppered throughout the award-winning musical were cut. But that's not what happened with "The Beatles: Get Back," Peter Jackson's wonderful docuseries that showcases the Beatles as they work on what would become their final album, "Let It Be."

The doc has the Beatles sitting around working out songs, and that process involves a lot of banter. And a lot of that banter involves cursing. And according to Peter Jackson, Disney wasn't too keen on that. "Disney wanted to remove all the swearing and Ringo, Paul, and Olivia [Harrison] said: 'That's how we spoke. That's how we talked. That's how we want the world to see us,'" Jackson told NME, adding:

"Paul [McCartney] describes it as being very raw. He said to me: 'That is a very accurate portrayal of how we were then.' Ringo [Starr] said: 'It's truthful.' The truthfulness of it is important to them. They don't want a whitewash. They don't want it to be sanitized."

While Disney doesn't seem like the type of gigantic company that rolls over for people, it's clear that the House of Mouse wasn't willing to say no to the Beatles, and thank heavens for that. 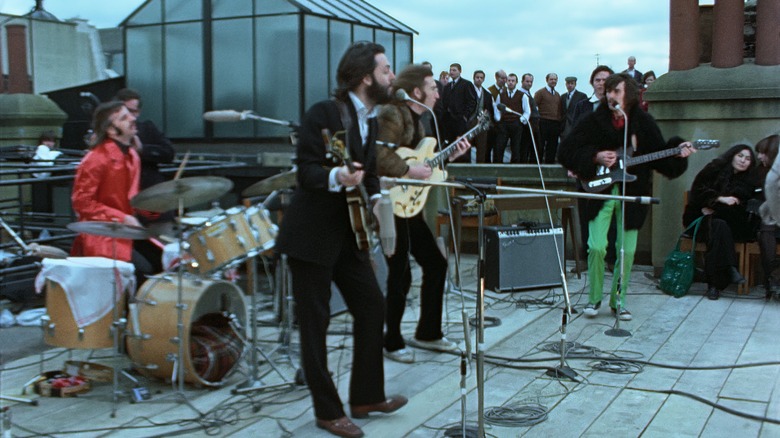 In the same interview, Jackson also revealed that when he showed the surviving Beatles the final docuseries, they didn't ask him to change anything – which Jackson wasn't expecting. "When they got to see the finished thing, I was expecting notes. It would've just been normal to get a note saying: 'Oh, that bit where I say that — could you cut that out?' Or 'Could you shorten the conversation there?' And I didn't get a single note," Jackson said, continuing:

"Not one request to do anything. One of them said that they watched it and found it one of the most stressful experiences of their entire life. 'But I'm not gonna give you any notes.'"

Again: good. "Get Back" definitely does not try to sanitize things, nor does it attempt to only portray the Beatles in a positive light. Indeed, the very nature of the docuseries focuses on how this is more or less the end of the road for the band, and to portray that disintegration in an overly cheerful, sanitized light would've been weird.

Read this next: The 20 Best Dystopian Movies Of All Time

The post Disney Wanted to Censor The Beatles: Get Back, The Beatles Said No appeared first on /Film.

Next post The Beatles: Get Back Featurette: Peter Jackson Wanted A 'More Accurate Account' Of The End Of The Band