"Doctor Who: Flux" has just come to an end, but there's no rest for the wicked -- or for Time Lords and their companions. After the credits rolle.. 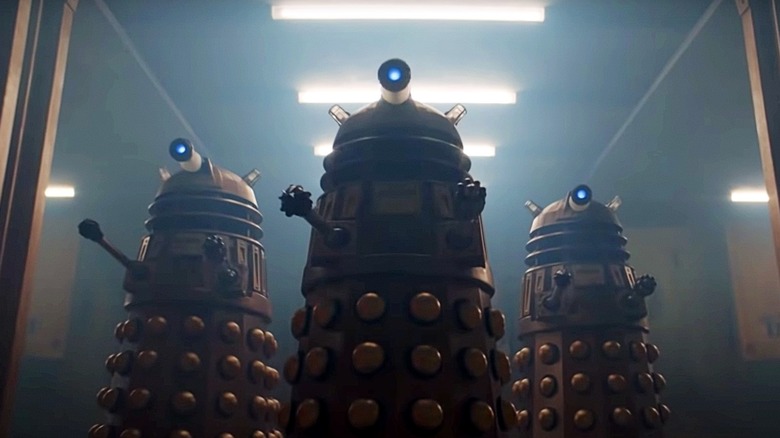 "Doctor Who: Flux" has just come to an end, but there's no rest for the wicked — or for Time Lords and their companions. After the credits rolled on the season 13 finale, the BBC aired a trailer for "Doctor Who: Eve of the Daleks," the upcoming New Year's special set to premiere on January 1, 2022.

And what better way to ring in the New Year than with a time loop? The trailer for "Eve of the Daleks" features the return of one of the Doctor's oldest enemies, but rather than dying permanently when zapped by the bobbly space dustbins, the Doctor and her companions find themselves right back where they started due to some strange goings-on at ELF Storage. In a press release accompanying the trailer, the BBC offered this plot summary:

The trailer for the special, which aired following the series thirteen finale, finds the cast trapped in ELF storage and stuck in a terrifying time loop with the Daleks. Will the gang manage to avoid extermination and escape the storage facility in time to see out New Year's Day?

The real question, of course, is whether being stuck in a time loop means they'll get to escape the traditional New Year's Day hangover. As for their New Year's resolutions, I presume one of them will be "stop getting stuck in time loops." Check out the trailer for "Doctor Who: Eve of the Daleks" below.

Doctor Who: Eve Of The Daleks Trailer

Daleks are the perennial villains of "Doctor Who," and with good reason. Their design hasn't really changed much since they were first introduced, which means they bring an old school nostalgia factor to any episode they appear in. And despite their clunky bodies, Daleks are actually pretty scary (it's those screeching metallic voices), which makes them perfect for mildly terrifying the kids on New Year's Day.

"Doctor Who: Eve of the Daleks" will feature guest stars Aisling Bea ("Living With Yourself") and Adjani Salmon ("Dreaming Whilst Black"), both of whom are featured in the trailer. Bea plays Sarah, the owner of ELF Storage, while Salmon plays a customer, Nick.

"Doctor Who" star Jodie Whittaker is set to exit the role after the three specials airing in 2022, starting with this one. Russell T. Davies (who pioneered the "Doctor Who" revival back in 2005 and was showrunner during the Christopher Eccleston and David Tennant eras) is returning to helm the series in 2023 and bringing a new Doctor with him (actor TBD). Davies is coming off the critically-acclaimed drama series "It's a Sin," about a group of gay men living through the AIDS crisis during the 1980s and early '90s, so there are plenty of reasons to be excited for his return.

Read this next: 14 Shows Like Rick And Morty That Are Worth Your Time