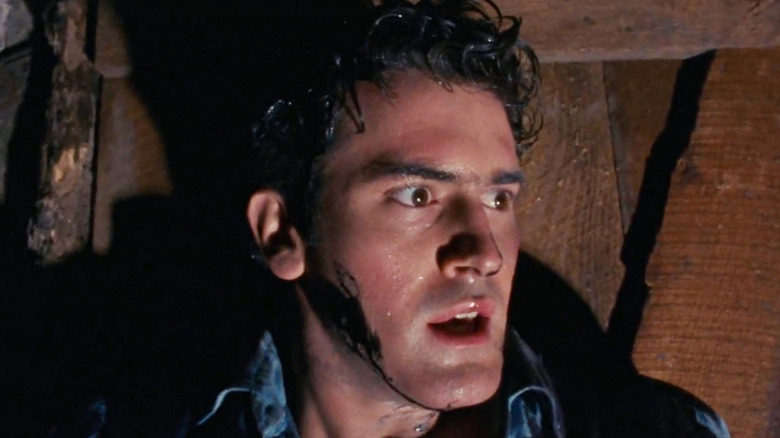 When you think about it, it makes prefect sense that Sam Raimi and the Coen Brothers have worked together. Raimi and the Coens share an uncanny ability to merge comedy with violence, as well as an eccentric (and often dark) sense of humor that factors heavily into many of their films. They can also be dead serious when the occasion calls for it, as shown by their efforts behind the camera on such dramatic crime thrillers as "A Simple Plan" and "No Country for Old Men," respectively.

Their shared history dates back to the start of Joel Coen's filmmaking career after he graduated from New York University's undergraduate film program and briefly enrolled in the University of Texas' graduate film program in 1979. However, instead of continuing his education, he quickly dropped out and sought experience working on various music videos and movies, including a shoestring-budgeted supernatural horror project that Raimi was developing at the time. And yes, I mean "The Evil Dead."

Because he was still getting the hang of the "making movies" thing, Raimi wound up shooting far more footage than he needed during production on "The Evil Dead." As a result, he hired Edna Ruth Paul to help with the editing, with Coen serving as the film's assistant editor. Yet, according to Far Out, the most valuable thing Coen got out of the endeavor was not how to edit a movie down to size but how to do a rather handy camera technique: the so-called "Shaky Cam."

Raimi famously employed the "Shaky Cam" to depict the POV of a demonic entity moving rapidly through the woods in "The Evil Dead." Not long after, Joel Coen lifted this technique directly for his and his brother Ethan Coen's feature directorial debut on 1984's "Blood Simple" in scenes like the one above, where the wrathful Julian Marty (Dan Hedaya) tries and fails to kidnap his wife Abby (Frances McDormand) from her lover's home. Yet, much like Raimi, the Coens made the "Shaky Cam" their own, using it to capture Julian and Abby's volatile emotions while heightening the intensity of their struggle.

After collaborating with Raimi on 1985's "Crimewave," the Coens once again utilized this type of camera shot in their second feature-length directorial effort, 1987's "Raising Arizona." In that case, the movie prominently featured "Shaky Cam" in a dream sequence centered on the comically apocalyptic biker Leonard Smalls (Randall Cobb), recalling the surreality of the "Demon Cam" from "The Evil Dead." The Coen Brothers mostly shifted away from wildly untethered camera movements after that, though, even while reuniting with Raimi on the 1994 screwball comedy pastiche "The Hudsucker Proxy."

That being said, the Coens still implement the "Shaky Cam" when it makes sense, as they did to powerful effect in this intense moment from "No Country for Old Men." So, even to this day, the influence of "The Evil Dead" can be felt in the Coens' films — if you know what to look for.