Who is "Don't Look Up" for? Adam McKay stepped away from his unapologetically silly comedies with 2015's "The Big Short," a semi-serious inv.. 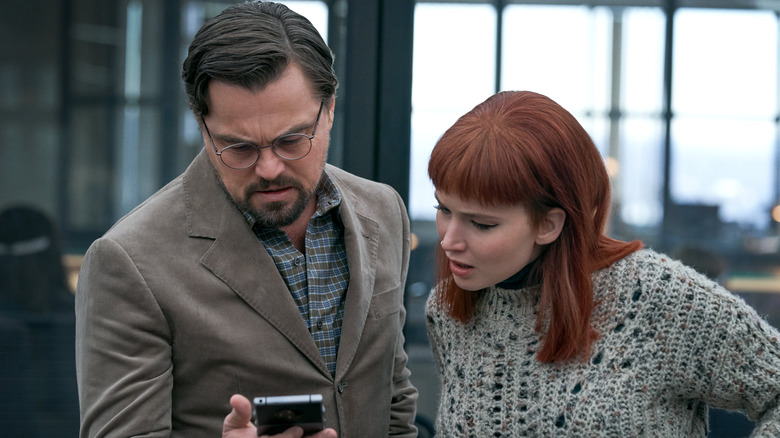 Who is "Don't Look Up" for? Adam McKay stepped away from his unapologetically silly comedies with 2015's "The Big Short," a semi-serious investigation into the crisis surrounding the United States housing bubble. It was a new side to McKay, and while the film outfitted famous players in goofy wigs, the reception was positive, and the message was sound. McKay ventured further down this path with "Vice," his acidic biopic of Dick Cheney. The reaction to "Vice" was more mixed — most critics tore it apart, although I will admit it worked for me. Now here comes "Don't Look Up," which might be McKay's biggest movie yet, complete with a sprawling cast of huge names. But here, the filmmaker has stumbled too far from the path, and he can no longer see the forest for the trees. He's created a smug, shrill, obvious satire that has nothing to say other than "Humanity is screwed." It's not even that I disagree with that assessment — things sure seem dire right now! But good satire requires more than simply pointing a finger at something and asking, "Isn't that f***ed up?"

The film, which McKay also scripted, is meant to be an allegory for climate change, and how those in positions of power seem to be willfully ignorant about the looming crisis. But it could just as easily serve as a satire of the Trump administration's reaction (or lack thereof) to COVID-19. Trump is, thankfully, no longer in the White House, but his abysmal, inept presidency, full of cronyism and incompetence, is the target here. And again: I have no complaints on that front. By all means, let's keep talking about what a disaster Trump was. But one of the biggest problems "Don't Look Up" has is that it's preaching to the choir, and its sermon isn't all that interesting to begin with.

The people who will seek out "Don't Look Up" and take anything away from it are likely to already be liberal-leaning. In other words, they're already in the tank. Meanwhile, the folks who actually could stand to hear some of what the film is shouting about — those indoctrinated into the death cult of MAGA — won't give a damn about what McKay and all his Hollywood pals have to say. And perhaps that's really the ultimate goal of "Don't Look Up" — an excuse for smug, self-righteous liberals to bask in how smart they are while everyone else is a dunce. This isn't a movie with a message; it's an excuse to point and laugh at the oblivious. I consider myself a liberal person, and I could hardly stomach the weak, unsubtle crap "Don't Look Up" is peddling. This isn't just a disaster movie. It's also a disaster.

The End Is Nigh 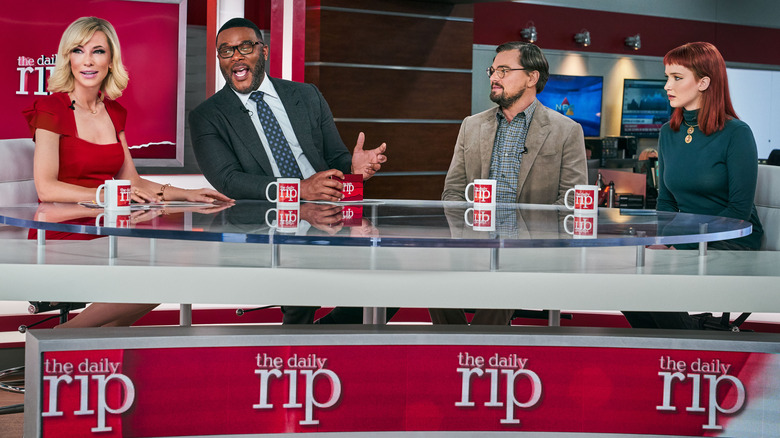 There's a giant comet hurtling towards the planet, and when it hits, we're all going to die. It's an incontrovertible fact. And yet the only two people who seem to actually realize that are astronomers Dr. Randall Mindy (Leonardo DiCaprio) and student Kate Dibiasky (Jennifer Lawerence). Kate is the first person to spot the comet, and Dr. Mindy is the person who does the calculations that reveal our impending doom. The astronomers quickly contact the government, and this ends up being the first of many mistakes. The current President, played by Meryl Streep, is a Trumpian goon who barely pays attention during meetings. Those meetings are always attended by her nasty son/Chief of Staff, played by Jonah Hill. When Kate and Dr. Mindy lay out their case, the Chief of Staff blows them off and the President says she'll "look into it." But it's clear she's not going to do anything.

A sympathetic scientist, Dr. Clayton Oglethorpe (Rob Morgan), suggests to Kate and Dr. Mindy that they leak news of the comet to the press. But this, too, doesn't go according to plan. The astronomers get invited onto a brain-dead "Good Morning America"-style program, where they're interviewed by grinning hosts Cate Blanchett and Tyler Perry. They, too, brush off any warnings of doom — and this finally sends Kate over the edge. She has a meltdown on air and is quickly labeled by social media as crazy. Dr. Mindy, meanwhile, fares a bit better. Social media starts calling him "hot," and the government is quick to make him the face of their approach towards the crisis while Kate is blacklisted and tossed aside.

Things grow increasingly dire. When the President finally comes around to taking this threat seriously, an "Armageddon"-like plan is devised to launch a mission to blow up the comet. It looks like it could, work, too — until the mission is aborted at the last minute. Peter Isherwell (Mark Rylance, who seems to still be channeling his character from "Ready Player One"), a bizarre tech billionaire clearly modeled on Elon Musk, realizes that the comet contains precious metals, and he would like to harvest them instead of having the comet destroyed. And since he's a huge donor to the President's campaign, she's more than happy to acquiesce. 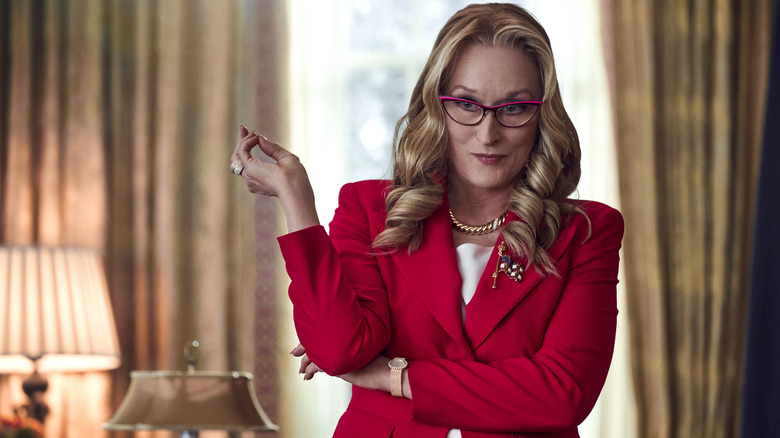 None of these story ideas are bad, and a better satirist could've done something here. Imagine if Paddy Chayefsky were still around! Chayefsky is clearly the model here, too, since "Don't Look Up" even eventually gives DiCaprio's character his own "I'm as mad as hell!" breakdown speech on live TV. But McKay doesn't know how to get his points across without slapping you in the face and shrieking in your ears. The idea of the United States Government, or most world leaders in general, choosing profit over the lives of everyone on earth is, sadly, absolutely believable here in this hellworld we call home. Yet "Don't Look Up" takes such a clumsy approach to spelling this out that it annoys rather than enlightens.

McKay employs a distracting editing style here where the camera is constantly cutting. No shot can linger longer than a few seconds. And if that's not hectic and frantic enough for you, the filmmaker is also fond of cutting away from scenes while characters are mid-sentence, because, I assume, he thinks it's funny. All of this smashes together to create a cacophonous extravaganza that's akin to being surrounded by screaming, babbling preschoolers in desperate need of naptime.

As "Don't Look Up" unfolds, more and more famous faces parade through the film for brief cameos or uneventful supporting roles. Timothée Chalamet feels wasted as a character who doesn't show up until near the end of the film. Ariana Grande has an extremely small part as a pop star who adds nothing to the overall film. The usually dependable Ron Perlman is rather bland as a racist astronaut. The only cameo that seems to work involves Chris Evans, playing a movie star who has adopted a "both sides" approach to the comet; the type of person who says, "Sure, the comet is bad. But … maybe it's good, too?"

Is McKay deliberately mocking the real Evans' own both-sideism via his "civic engagement platform" A Starting Point? This platform had the real Evans posing for smiling thumbs-up pics with some of the fringe lunatics of the GOP — people who would happily blow up democracy if it meant they could make Donald Trump their big baby king. If that's what McKay is doing here, I applaud for getting Evans to go along with it all. But I think I might be giving him too much credit.

A Hollow Waste Of Time And Talent 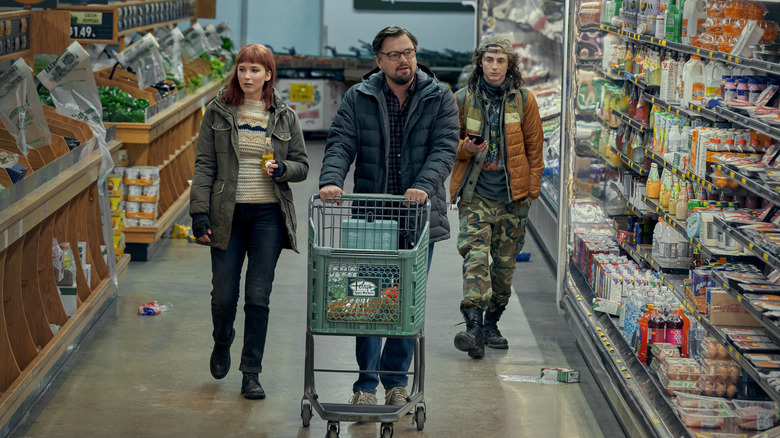 As for the main players, only DiCaprio comes away unblemished. The actor gives a strong, sweaty, panicked performance here, and it's fun to watch him slowly lose his cool as the story progresses. It's also one of the most adult roles he's played so far — his character has multiple full-grown children, which is somewhat startling at first. Lawrence's character, meanwhile, feels oddly undercooked. She does the best she can, and does get some of the film's only genuine laughs via a running gag involving snacks at the White House. But her character never feels as fleshed-out as DiCaprio's, and the role suffers for it. Blanchett has a little fun as the icy TV host who grows closer to DiCaprio's character. Streep appears to be phoning it in. And Hill, a performer I usually enjoy, is borderline abysmal. McKay unwisely lets the Hill riff, endlessly, which means scenes with Hill as the bratty Chief of Staff stretch on, and on, and on, with not a single joke landing.

By the time "Don't Look Up" reaches an admittedly surprising conclusion, it's wasted all of its goodwill. The final moments that unfold here would be incredibly emotional and strong had every single moment before not been absolute dreck. Instead, a powerful scene is rendered powerless, and any attempt at pathos or emotion fizzles, like a firecracker with a wet fuse. McKay is going for something big here, and yet it feels so small.

Worst of all, these final moments of the film make it abundantly clear that as a storyteller and a filmmaker, McKay has absolutely nothing to say about the topics he's skewering, and he shouldn't have even bothered to try. This is a hollow waste of time and talent; a comedy whose idea of humor is simply pointing a finger at something and chuckling obnoxiously. We, as a society, don't just deserve better leaders. We deserve better satire, too.

The post Don't Look Up Review: This Smug, Shrill Disaster Movie Satire is Just a Disaster appeared first on /Film.

Next post The Essential Marvel Movies You Must Rewatch Before Spider-Man: No Way Home