The Man From Toronto Review: An Uninspired Comedy That Wastes Its Potential

Teddy Jackson (Kevin Hart) is down on his luck. He's been in the sales business for 10 years with little to show for it: at his wife's work,.. 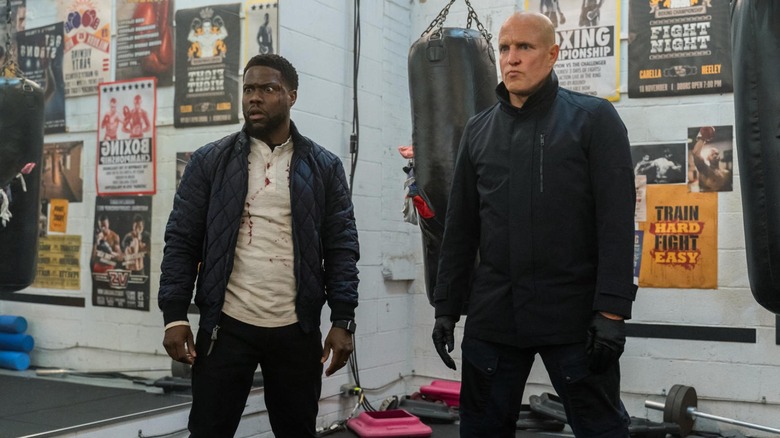 Teddy Jackson (Kevin Hart) is down on his luck. He's been in the sales business for 10 years with little to show for it: at his wife's work, they use Teddy as a verb, which means to screw something up. His latest project involves promoting Marty's Gym, which includes some unsuccessful YouTube videos of some ill-designed fitness products, and an expensive flyer that contains neither the address nor phone number for the gym. With this many errors, it's no surprise that Teddy loses his job. His boss remarks "You're a nice guy, you really are, but I need a dude with some grit."

If you know how formulaic Patrick Hughes' "The Man From Toronto" is, you'll know that grit is exactly what Teddy is going to get. Pushing aside the bad work news, Teddy is determined to treat his wife to an awesome birthday, booking a holiday cabin in Onancock, Virginia for the weekend. Of course, a lovely holiday is not what happens — a mixup finds Teddy at the wrong place and at the wrong time, where he ends up being mistaken by a ruthless assassin, the Man from Toronto (Woody Harrelson). Things escalate, and Teddy finds himself continuing to impersonate the Man from Toronto at the behest of the FBI, who want to use Teddy in their plan involving explosions and the Venezuelan government.

How is it, exactly, that Teddy winds up in the wrong place? The answer turns into a joke that inexplicably runs throughout the entire film to absolutely no effect — he printed the directions to the rental with his printer toner low, so the numbers are blurry and he can't make out the correct address. It's something that could have happened a decade back, but printers are no longer commonplace in the average household. I find it incredibly unlikely that a guy who films his videos with a fancy 4K camera and a smartphone would print out anything. Even if he did, it's established before Teddy and his wife start their trip that they can't make out the address. Why would he never verify it on the technology available to him in his pocket?

This might feel like a rather outlandish nitpick, ​​but the film's attention to detail, or lack thereof, regularly creeps up. Teddy and the real Man from Toronto finally meet on an airplane, and soon after meeting, the Man throws Teddy's phone out the window. Later, Teddy is shocked to discover that the Man has gone through his text messages. When? How?

The most egregious of all the bizarre gaffes in the film has to be when the Man is guiding Teddy through a tense interrogation. While speaking to Teddy via an earpiece, he makes him a fake passport so they can fly back to the USA. To do so, he takes a valid Venezuelan passport with a color photo and replaces it with … a black and white photo. I couldn't believe my eyes, but the passport is seen later in the film, and the picture is indeed not color. I can take a logical leap as well as anyone else, but expecting me to believe the American border officers would let something so obviously fake go through without issue in a spy thriller of all things, is a step too far. It just feels like lazy storytelling.

Taken Down By A Lack Of Detail 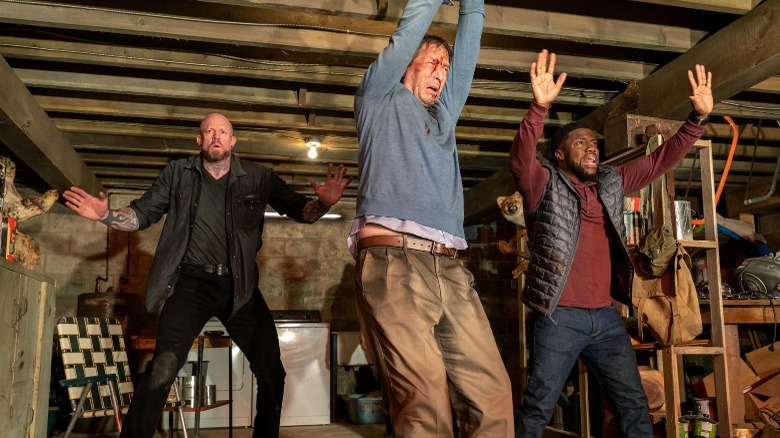 "The Man From Toronto" struggles throughout the entire film to establish a consistent tone. It feels determined to be a serious spy thriller, but it also seems like it's aiming to be an outright comedy. That's not to say those two things can't go together — they can — but "The Man From Toronto" never makes the balance palatable. Hart's character Teddy is always cracking jokes and delivering one-liners, but nobody around him ever seems to notice, letting his lines just linger in the ether, rendering the punch lines dead on arrival. Things do improve when Harrelson and Hart's characters finally get together, and their chemistry is really strong, but a lackluster script lets them down at every opportunity. It has running gags that were only moderately funny in the first instance (looking at you, non-contact boxing), but these gags are repeated, ad nauseam, to the point that what should be a rewarding payoff doesn't land. That's to say nothing of the story itself, which takes a fun scenario and does nothing original or creative with it, relying instead on tired plot beats you've seen before, done better elsewhere.

The city of Toronto has an interesting relationship with cinema. Many studios flock to the Canadian city and surrounding areas to film to take advantage of tax breaks, but the city is used as a stand-in for other American cities like New York City and Chicago. As someone born and raised in a town not far from Toronto, I was excited to see the great city take center stage for once. I should have known better, as the city is featured as itself in exactly three quick shots before it later becomes a stand-in for an American city once again.

There's really no reason the film can't have big moments occurring in Toronto, as the actual plot is so anonymous that its paint-by-numbers approach would work the same in any location. Once again, the lack of attention to detail rears its ugly head, as the city name is mispronounced time and time again — excusable when your main character isn't from the city, but when Harrelson is literally the Man from Toronto, the least they could do is realize that nobody pronounces the second "T." 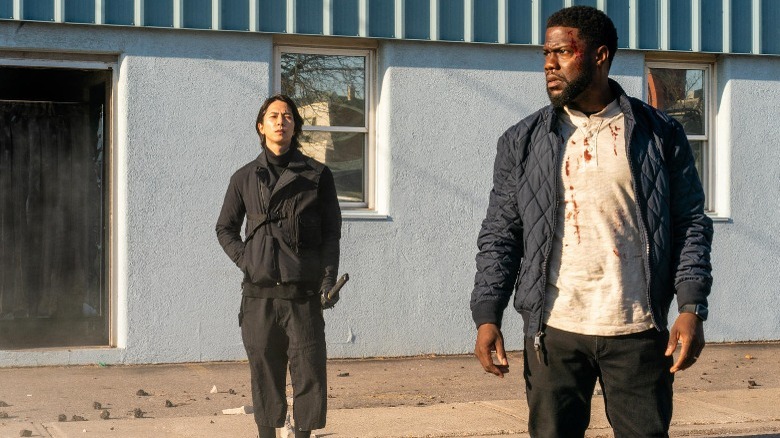 "The Man From Toronto" also suffers from being visually unimaginative. Aside from one impressive sequence set in a Puerto Rican tech company building that has a welcome and creative use of set and color, everything feels so barren and cold. That's especially disappointing when the film is constantly slapping new locations in big bold text onto the screen, but all we ever get from these varied locales are the same uninspired buildings time and time again. It makes Hart and Harrelson's strong chemistry a lot less exciting when they're saddled with predictable dialogue and unimaginative locations.

All is not lost, however, as "The Man From Toronto" does have some genuinely fun and creative fight choreography. It takes advantage of the fact that Teddy and the Man have vastly different skill sets, and it's in these moments that the film achieves the balance between spy thriller and comedy it is striving to obtain. The best moment of the entire film comes in an epic fight scene in a gym, which is rife with frenetic camera action, interesting weapons, and impressive moves. The battle has shades of the church scene in "Kingsman: The Secret Service," though this one is a lot more fun. It's a fun hint at what "The Man From Toronto" could have been in the right hands. Instead, it's an underdeveloped story that hits every cliched plot point under the sun, wasting some legitimate star power along the way.

The post The Man From Toronto Review: An Uninspired Comedy that Wastes its Potential appeared first on /Film.

Previous post How Interstellar Ruined A Black Hole Remake From The Director Of Top Gun: Maverick