"The Black Phone," from director Scott Derrickson and his writing partner C. Robert Cargill, is based on a short story by Joe Hill (the son of horror .. 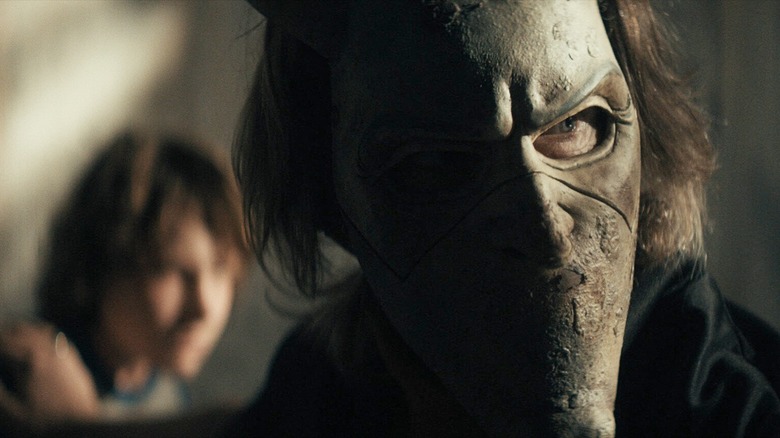 "The Black Phone," from director Scott Derrickson and his writing partner C. Robert Cargill, is based on a short story by Joe Hill (the son of horror master Stephen King). It tells the story of a young boy named Finney (Mason Thames) who is snatched by a serial killer dubbed the Grabber (Ethan Hawke). Finney's sister, Gwen (Madeleine McGraw), is touched by dreams that might help her save her brother, but the ghosts of the other children murdered by the Grabber do their best to help, too.

The film is a tight suspense drama in a locked room that will make you feel unsafe in the best ways. But there are other movies that tackle similar slices of the subject matter and are worth your time if you leave "The Black Phone" hoping for more top notch horror and suspense. Here are six films to start with. 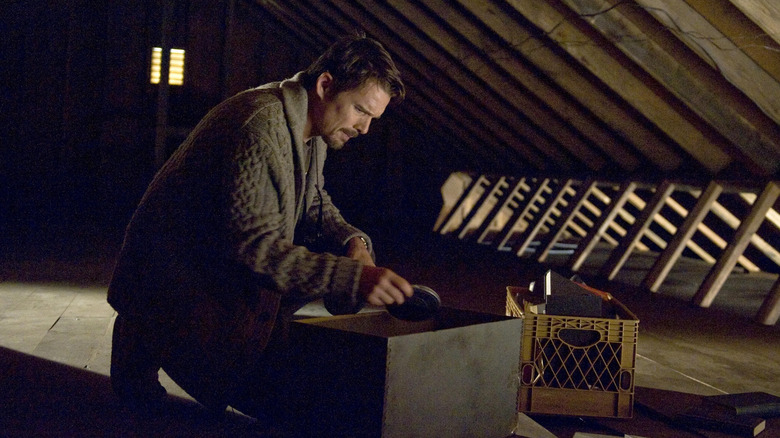 Another film from the Derrickson/Cargill/Hawke trio, "Sinister" offers some of the same creepy aesthetics as "The Black Phone." The film follows Hawke as a true crime writer researching a story, who discovers videos that document the grisly murders that took place in the house he's moved into.

The grainy, 8mm aesthetic is enhanced for an even better emotional effect in "The Black Phone," but watching Hawke suffer through the films he watches and the decisions he makes is nothing short of gut-wrenching. And seeing where this trio got their start a decade ago is a great jumping off point to see how much better they've improved their craft in the genre.

"The Black Phone" and "Sinister" both have views on the supernatural being present in the characters of young girls, but each film takes them in completely different, surprising directions. 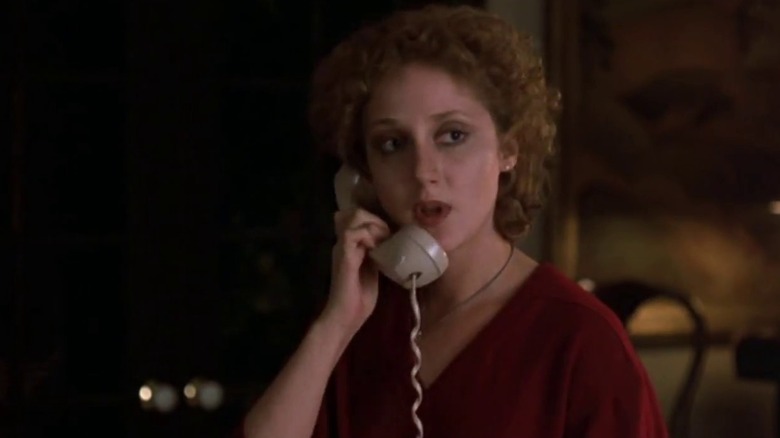 Phones can offer an element of horror all on their own. There's no doubt about it. Think about the breath on the other end of a phone call, a voice coming at you from a distance. It can be creepy, and it might not have ever been used to such chilling horror effect than in the first twenty minutes of 1979's "When a Stranger Calls".

Written and directed by Fred Walton, the first twenty minutes of the film follow a babysitter named Jill (Carol Kane) as she's plagued by calls from someone who is actually inside the house. Unbeknownst to her, he's already murdered the children. The entire sequence is chilling and the movie ramps up from there. "The Black Phone" amps up the tension on the phone call as horror motif when Finney starts receiving phone calls from beyond the grave.

Director Wes Craven memorably paid homage to "When a Stranger Calls" with Drew Barrymore's opening sequence in the original "Scream" film, making it a must-watch for any horror fan, but doubly so for fans of "The Black Phone." 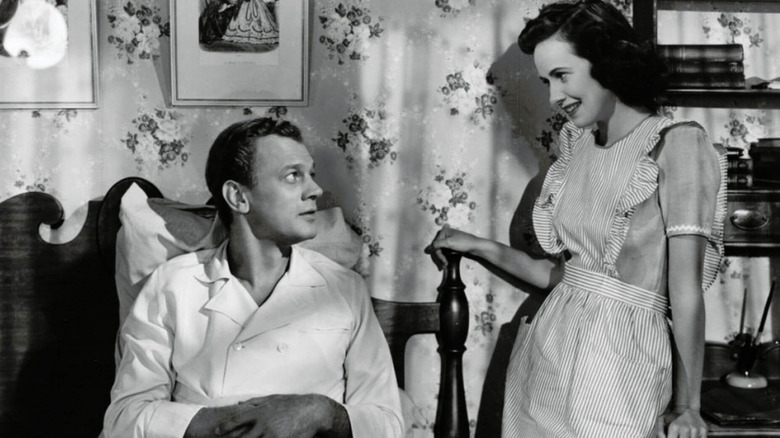 It's always a difficult thing to watch children in danger, which makes it a long trope in the history of horror. That's not necessarily a bad thing. In both "The Black Phone" and Alfred Hitchcock's masterpiece, "Shadow of a Doubt," the tension and suspense are played against the threat of violence against kids.

In Hitchcock's film, the would-be victim is young Charlie (Theresa Wright). She's the favorite teenage daughter in the family and everyone adores her. She's named for her favorite uncle (Joseph Cotten), and when he comes to stay with the family, things couldn't be better. But Charlie starts to suspect that her namesake is hiding a terrible secret. In reality, he's the Merry Widow Killer and wanted by the police. When he realizes she knows his secret, his thoughts turn to murder. The film plays out as a tense game of cat and mouse and is one of the finest thrillers Hitchcock ever produced. In fact, he regularly cited it as his own favorite work. 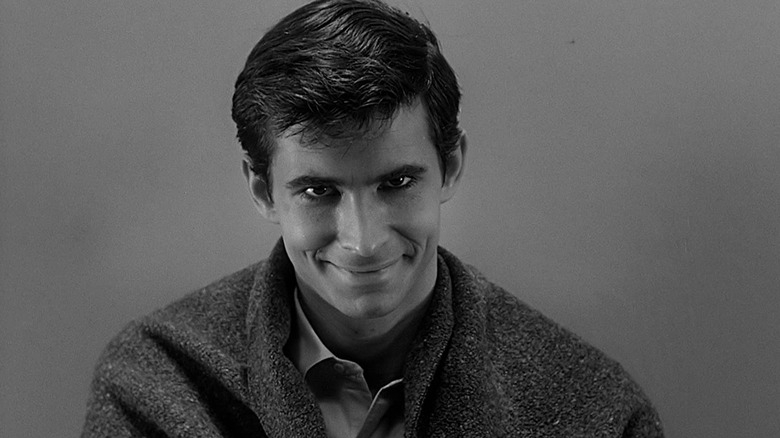 Serial killers like the Grabber find shared DNA in Norman Bates, one of the original golden boys of cinematic serial killers. Alfred Hitchcock's "Psycho" is a master class in tension, suspense, and sleight of hand tricks in the narrative.

But it shares something else fascinating with "The Black Phone" as well, and that's the shifting nature of the point of view character. In "Psycho", Janet Leigh's Marion Crane is very clearly the protagonist of the story. We follow her through her inciting incident and all the way up to her decision to return to the money. But then the shower scene happens, she's murdered, and the protagonist of the film shifts to Norman Bates himself. As the opening scenes of "The Black Phone" play out, we're left wondering which of the kids will be our main protagonist through the film. It fakes us out making us wonder if Bruce is the main character, following him on a triumphant bike ride after the game — until he's snatched by the Grabber as well. 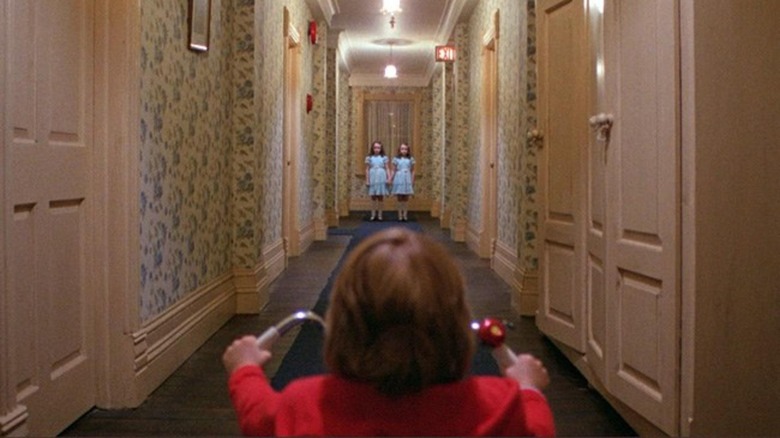 Stephen King's "The Shining" might have set the standard in stories about kids touched with a gift of foresight and the supernatural, and its exemplified in Stanley Kubrick's 1980 adaptation of the story. Although Danny's gift is different than Gwen's in "The Black Phone," both of them are haunted by the terrors they see and can't always handle the things around them that spin further and further out of control.

And, like Danny Torrance, both Finney and Gwen have to compete with a physically abusive drunk of a father, played in "The Black Phone" by Jeremy Davies. Derrickson and Cargill portray the father much more sympathetically in "The Black Phone," despite the haunting depictions of abuse that occur in the film, than Jack Nicholson was able to portray Jack Torrance, but the similarities are still there. 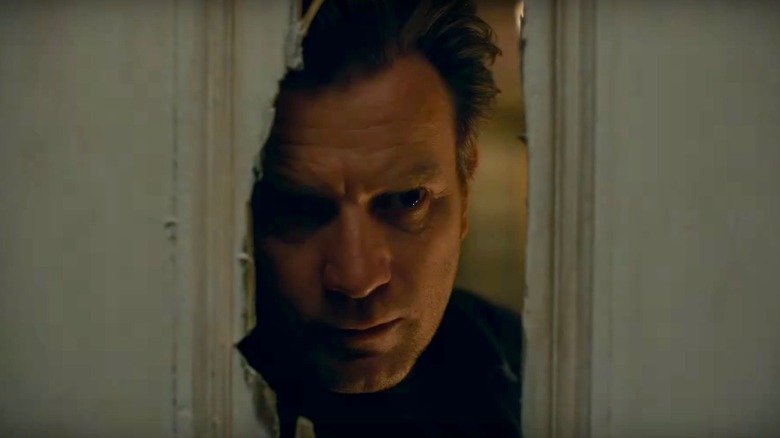 "The Black Phone" certainly pushes buttons for those who don't like to see violence perpetrated against children. The film in recent memory to trade on this in ways more horrifying than "The Black Phone" is 2019's sequel to "The Shining:" "Doctor Sleep."

The film works as a perfect adaptation of the book that seemed almost spite-written by Stephen King to ensure Kubrick's version of the story could not be followed up on, but somehow balances that against the iconography of Kubrick's film, making it a brilliant compromise between two culturally important iterations of a story. As most of the other films on this list delve into the supernatural, so does "Doctor Sleep," trading in on that "Shining" that kids in these sorts of horror movies seem to have.

"The Black Phone" gives us things equally tense and terrifying to watch, making "Doctor Sleep" a worthy follow up if you're looking for more.

Read this next: The 13 Best Movies About The Devil Ranked

The post 6 Movies To Watch if You Loved The Black Phone appeared first on /Film.

Next post The Umbrella Academy Season 3 Ending Explained: A Kugel-What-Now?