How The Thing Crew Created That Unmistakable Title Sequence

John Carpenter's "The Thing" is a stone-cold classic, from its first scene to its final shot. Like many of Carpenter's greatest hits, the An.. 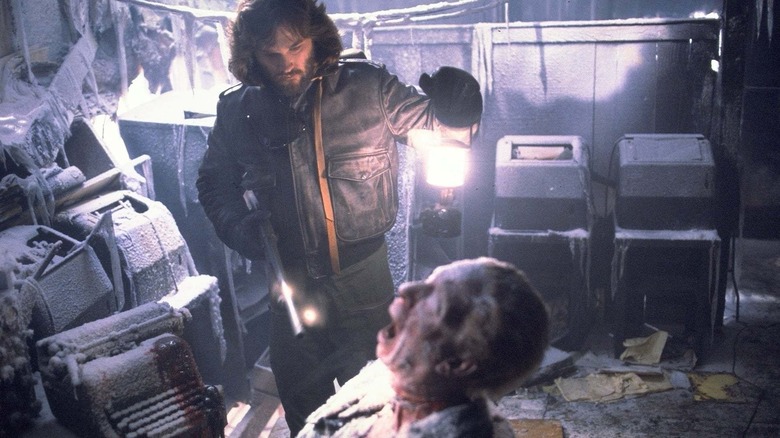 John Carpenter's "The Thing" is a stone-cold classic, from its first scene to its final shot. Like many of Carpenter's greatest hits, the Antarctica-set alien horror film establishes its level of cool early on, with a killer title sequence that still holds a place in the public imagination 40 years later.

The movie's opening titles start off simply, with cast and crew members' names fading in and out against a black screen while an ominous, humming score drones in the background. It's all pretty run-of-the-mill until Carpenter's name shows up, and the black background is replaced by a star-speckled night sky. Something moves in the darkness and looks almost animal, but as it approaches it's shown to be a spacecraft. The shot changes to show the edge of the earth against the same backdrop of stars, and the craft tilts and burns hot as it approaches the atmosphere.

Just as the sound of the craft quiets and its red-hot hue flickers out, the title comes ripping onto the screen. The words "John Carpenter" appear, followed by a series of shreds through the fabric of the universe that spell out "THE THING." A sort of cosmic whooshing and cracking sound accompanies the title's slow and steady appearance. Bright light flickers through the blue-white letters, timed perfectly to a noise like thunder. Then, the title fades out.

A Fish Tank, A Trash Bag, And A Match 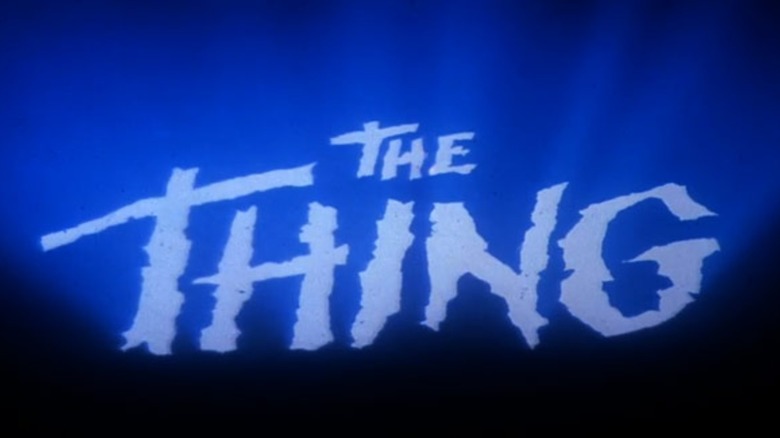 This is an awesome and indelible image, one that modern viewers might assume was made by CGI. After all, the same year that "The Thing" was released, "Tron" took the world by storm with its then-complex computerized graphics. But "The Thing" is known as a practical effects masterpiece, not a digital one, and that old-school movie magic actually extends to the creation of the title sequence.

In the 1982 featurette "The Making of The Thing," visual effects designer Peter Kuran explains the technical handiwork that went into making that tear-a-hole-in-the-world title. As it turns out, it involved a fish tank, a trash bag, and a match. "We had a fish tank that was about four feet wide by two feet high," Kuran explains, "And I put smoke in the fish tank, and then on the back of the fish tank I put the title, "The Thing," I drew it on an animation cell."

The designer, who has also worked on projects like "RoboCop" and "Beetlejuice," explained that he put "a piece of garbage bag plastic" behind the animation cel, which was attached to its frame and stretched across. Behind that, he positioned a light in the direction of the letters. So basically, picture a fish tank full of smoke with a celluloid-like title drawing attached to the back, and a black trash bag attached to that.

An Era Of Brilliant Practical Effects 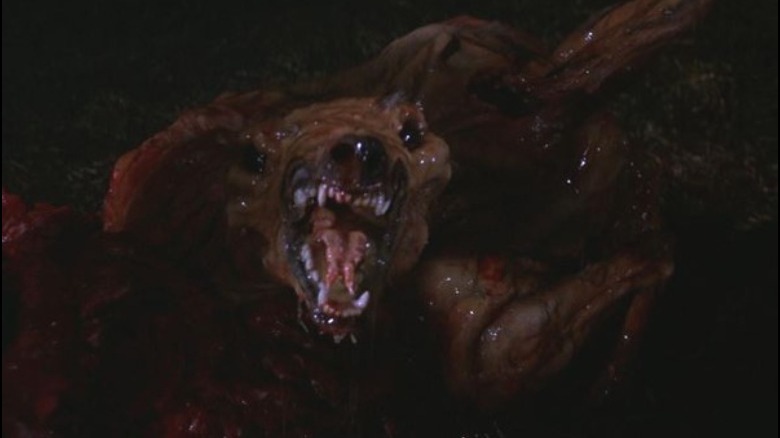 In a hilariously modest wrap-up of his complex explanation, Kuran calls the setup "a very simple process to do." He does admit, though, that it took several takes to get the shot just right, as sometimes only certain letters would burn through.

As innovative as this setup is, one of the basic pieces the team behind "The Thing" used is a classic cinematic trick that has appeared in several famous sci-fi movies. A "cloud tank," or a fish tank filled with layers of water, steam, and other atmosphere-mimicking liquids, has been used to create alien-looking weather in movies like "Close Encounters of the Third Kind" and "Cocoon," according to PBS Digital Studios.

"The Thing" is brimming with thrilling, cutting-edge practical effects, from the monstrous maw that emerges from Norris' body to the Dog-Thing in all its gooey glory. Four decades later, it's a movie whose behind-the-scenes creativity still blows minds and inspires awe, beginning with that epic opening title that rips apart the screen.

Read this next: The 50 Best Documentaries You Can Watch On Netflix Right Now (June 2022)

The post How The Thing Crew Created That Unmistakable Title Sequence appeared first on /Film.

Next post Nine Inch Nails Repurposed A Rejected Song From Twin Peaks: The Return – Listen To It Now