Historically, the "Predator" movies have been male-dominated testosterone fests. (On the set of John McTiernan's 1987 original, Arnold Schwarzene.. 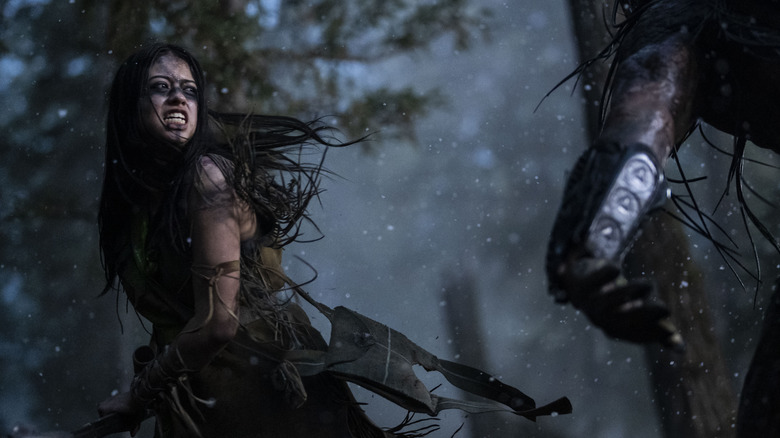 Historically, the "Predator" movies have been male-dominated testosterone fests. (On the set of John McTiernan's 1987 original, Arnold Schwarzenegger and the rest of the cast would wake up before filming, run five miles, and furiously pump iron before cameras rolled in order to looked as jacked as possible.) And while there have been women in these movies before — Alice Braga in "Predators," Olivia Munn in "The Predator," etc. — the new prequel, "Prey," marks the first time a woman is playing a lead role in this franchise.

Amber Midthunder ("Legion," "Roswell, New Mexico") plays Naru, a skilled Comanche warrior who is underestimated by members of her tribe; they'd much rather see her hang around their village and do the type of work that's more traditionally associated with women than be out hunting in the forests hunting. In many ways, Naru is a typical cinematic underdog — but Midthunder herself never viewed her that way. "I think it was more my ability to do her justice that I was concerned with," the actress told us in a recent interview.

She has nothing to worry about on that front. Midthunder brings a sense of confidence and dogged determination to this role, as well as a fierce intelligence that serves the character well when the film settles into a battle of wits (as "Predator" movies often do). In the lead-up to the film, we spoke about her secretive audition process, the musical artist that helped her get into character, some of the movie's biggest fight sequences, and more.

'I Never Once Thought Of Her As An Underdog' 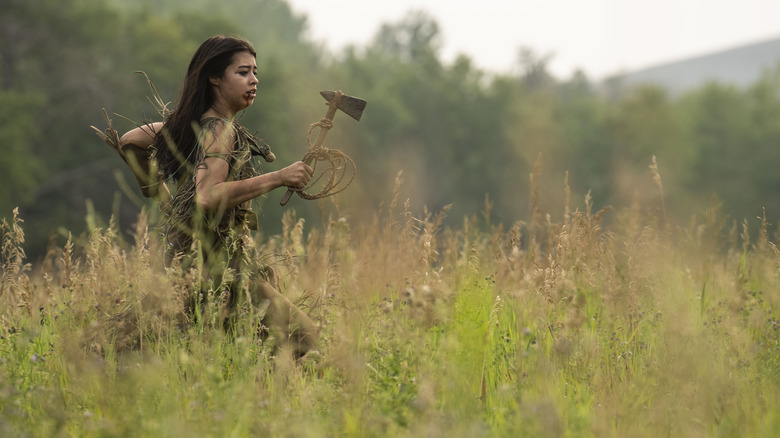 Can you tell me about your audition process for this? At what point did you actually find out that this was a Predator movie? Because I know they were keeping that secret for a while.

Midthunder: Yeah. I did not find out until quite late in the game. I think I knew really close to my test, which was a year and a half after my initial audition.

Midthunder: I auditioned with Dan the first time in February of 2020, and then Covid happened and it disappeared. And then sometime in 2021, it came back and we went to go shoot. But yeah, I mean, all that I knew was that it was a movie about a young Comanche woman who wanted to be a hunter. And I thought that was really interesting, I thought she was really interesting, and I was a huge fan of Dan, so that was kind of all that I knew.

Dan told me that he was looking at sports movies and underdog stories a lot for reference when he was making this. And I'm curious if that extended to be a part of your process, too. Did you watch anything ahead of time to help find an anchor for your performance at all?

Midthunder: I did. I'm learning that Dan and I have very different processes for this. And we had this running joke of, or at least I told him, "I've got secrets, and they're going to stay secrets." And slowly I would tell him, "Well, I think about this," or "I listen to this music," or whatever. Actually, Billy Eilish was a really big — somehow, that music was a very big part of this process for me. But I realize that this is referred to as an underdog story, and I understand that it is, but I think through the process I was so immersed in the mind of Naru that I never once thought of her as an underdog. I think that I believed in her and her abilities just as much as anybody else. And I think it was more my ability to do her justice that I was concerned with. (laughs) 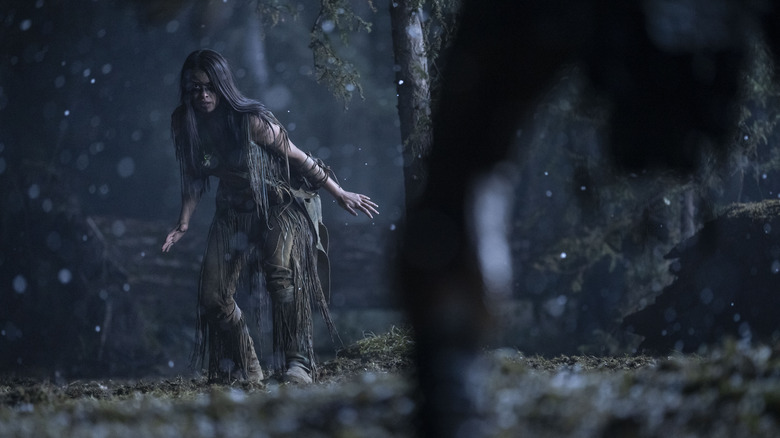 Were you adept at throwing tomahawks before filming began?

Midthunder: What's funny is a couple years before this, I actually bought my dad throwing axes for Father's Day. So I guess we're just that kind of family. That's just a part of my life. And then I saw this and I was like, "Oh great, throwing axes!" (laughs)

Did you have to do a lot of training for the weaponry used in this movie?

Midthunder: We did have a four-week training camp that we did in Calgary before we started shooting. But there's so much happening in the movie that we were there every single day working with stunt people, working with personal trainers, working with weapons and stuff like that. But at the same time, there's nothing that really prepares you for a week in a mud pit, you know?

Definitely. So you mentioned the stunt people. There are times watching this movie where it sort of seems like, "Okay, this is probably a stunt person here. This is maybe you here." Were there moments where you were crouching off camera and then the camera would move and you would jump into place?

Midthunder: I know exactly what you're talking about. Yeah, so we did have a sequence, the trapper fight that I had was a very cool one-shot sequence that had both me and my stunt double in it, so we did a lot of cowboy switches. So it was pieces where one person would start and then they would push over and then pull back and we would switch. And then same thing — somebody would roll, and then somebody would roll back in and it was both of us. And I realized that I thought I learned this fight over three lunch breaks. And then Dan reminded me, he was like, "No, you were working on this fight for the longest." He was like, "No, you learned this fight all the way back in training camp." I was like, "Well, yeah. I guess I did." (laughs) It's not quite as impressive as I thought, but still very cool to watch.

'I Got To Get Thrown Off Of The Predator' 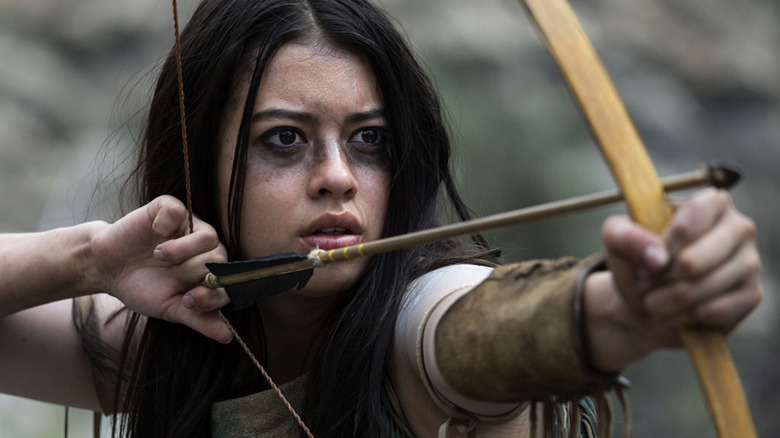 Your character gets to do some really incredible things in that big, final confrontation with the Predator. So having embodied the character and knowing Naru better than anybody else at that point, did you have any input about her actions in that big confrontation scene?

Midthunder: That was definitely a big conversation. I mean, obviously, there were a lot of people who were involved in putting that fight together. So I think Dan would kind of guide the stunt team, and then the stunt team would take it to me and I would ask questions or I would talk to Dan about it. And yeah, definitely. I mean, obviously, first of all, representing Comanche people, because they were incredible hunters and warriors, is so important. And then on top of that, just making sure that everything still feels like her. I mean, fortunately for that, I would learn every stunt sequence in its entirety, and as much as I could possibly do, I wanted to do everything myself. So I got to jump off the tree. I got to get thrown off of the Predator. I got to fight him. So all that stuff was so fun and so cool.

Midthunder: Honestly, the seasons changing. We were there for so long. I built a little life for myself there. We were there for so long. We got there in the spring and we shot all through the summer, and by the time we left, it was cold at night, it was fall. So I feel we were very fortunate to be there. We shot on Stoney Nakoda Reserve land. And there was a time that I went into a gas station — and I'm Lakota, Nakoda, and Dakota — so I went into the gas station, and every person in there spoke Nakoda. And that was like, I've never experienced that in my life. So to be working and shooting an Indigenous-specific movie around my own people, or people who are very similar to me, because my reservation's in Montana, it's not in Canada. But that was something that I could never have imagined.

"Prey" is now streaming on Hulu.

Read this next: 95 Best Sci-Fi Movies Ever

Next post Every Sergio Leone Movie Ranked Worst To Best