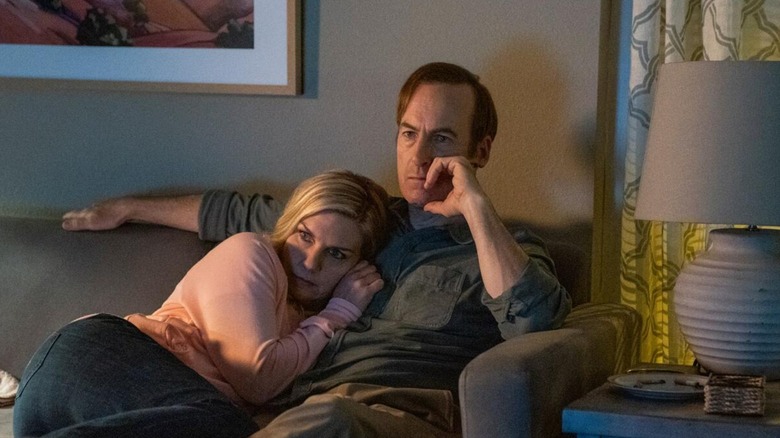 In the midseason finale of "Better Call Saul" season six, just before Lalo Salamanca paints their living room with doomed lawyer Howard Hamlin's blood, Kim (Rhea Seehorn) and Jimmy (Bob Odenkirk) watch a movie. This isn't unusual for them. Throughout the series' seven-year run, the pair have proven themselves cinephiles, often referencing classic movies in passing and sometimes settling down for a quiet movie night.

On this night, the pair are watching "Born Yesterday," a 1950 comedic drama about the exploits of a possessive crook named Harry (Broderick Crawford), his unrefined girlfriend, Billie (Judy Holliday), and a journalist, Paul (William Holden). The George Cukor flick is notable for a few reasons, but when it comes to its presence on "Better Call Saul," one stands out: a large part of its plot involves Harry talking Billie into marriage to achieve spousal privilege, so she can't testify against him in court.

Naturally, the film's appearance in "Better Call Saul," a series whose co-creator Vince Gilligan has been peppering with clues and symbolic references since the early days of "Breaking Bad," feels noteworthy. Does "Born Yesterday" hold some in-narrative significance? Does the nod to spousal privilege mean Kim will one day turn on Jimmy? According to episode writer-director Tom Schnauz, it's nothing so significant as all that. "We needed a movie and that was just one that felt fun for the scene. It's that simple," the filmmaker told The Hollywood Reporter.

A Habit Of Homage 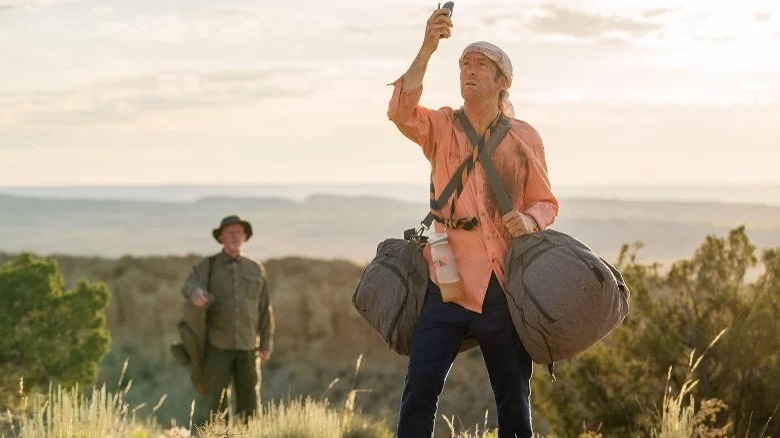 Schnauz says he wanted the moment to convey "Jimmy and Kim at their happiest," and that the classic was on a list of free films they're able to feature in the series. Still, that doesn't mean all of the movies featured in the series are meaningless. "There are certain films like 'Scarface' in 'Breaking Bad' where we'd have to pay [for them]," Schnauz says, referencing the 1983 Brian de Palma gangster remake that featured in a pivotal episode of the forerunner to "Saul."

If the inclusion of "Scarface" in an episode of "Breaking Bad" was intentional — and it surely was, since Gilligan has used the character as part of his elevator pitch for Walter White's journey from the beginning — that means "Better Call Saul" could be using its movie night picks to help characterize its antiheroes, too.

The series has certainly dabbled in purposeful homage before, from its "Citizen Kane"-like final season opener to Jimmy's journey into the desert a la "Lawrence of Arabia," in an episode that Gilligan says was almost shot on that film's exact lens. Coincidentally or not, the cover of "Lawrence of Arabia" shows up on a Blockbuster store shelf in the third season finale, just before Chuck's (Michael McKean) death sends Jimmy down the path that will eventually lead him on his accidental desert pilgrimage. 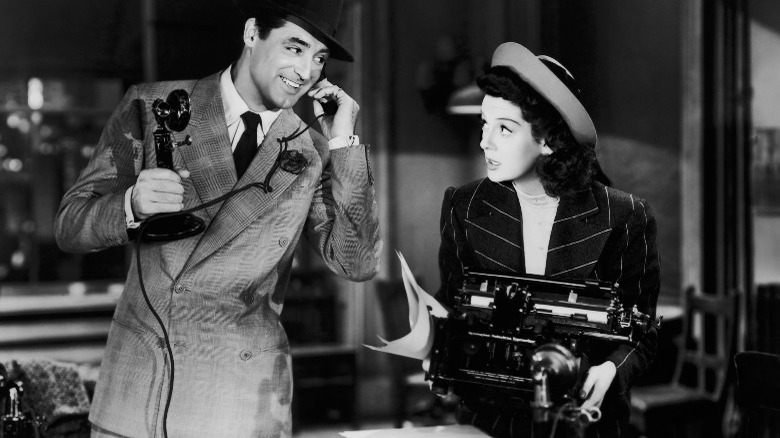 So what could the series' characters' movie night choices tell us about them? Well, it depends on who's watching what. Fixer Mike Ehrmentraut (Jonathan Banks), for example, has a knack for watching movies featuring characters whose lack of control stands in contrast to his own calm, collected demeanor. In one episode, he puts on "The Awful Truth," a 1937 screwball comedy starring Cary Grant and Irene Dunne. The pair play an indecisive couple who can't stop breaking up and falling for one another, then sabotaging each others' new relationships.

Later, Mike catches "His Girl Friday," a movie that Jimmy and Kim also watch later on. That film, another Cary Grant classic, follows a newspaper editor and his star reporter and ex-wife, who can't seem to get enough of one another or of the high-risk, high-reward work they do together. There's something to be said for retirement-age Mike simply liking Grant, an actor with a long and dignified career who maintained his success for decades. But it's also possible that he's watching movies that call to mind his coworkers and peers.

While the broad strokes of the first two films involve unorthodox couples who don't seem capable of quitting one another, as Jimmy and Kim would eventually become, another film Mike watches with Kaylee carries echoes of his work as well. "The Mouse That Roared" is a goofy 1959 war satire that starts out being about one product — a famous wine — but is actually about a much more sinister one, the atomic "Q bomb." In short, "The Mouse That Roared" features warring groups going through a whole lot of silly drama and showmanship. It's exactly the kind of power play nonsense Mike has no patience for in real life, when dealing with Gus Fring (Giancarlo Esposito) and the Salamancas. 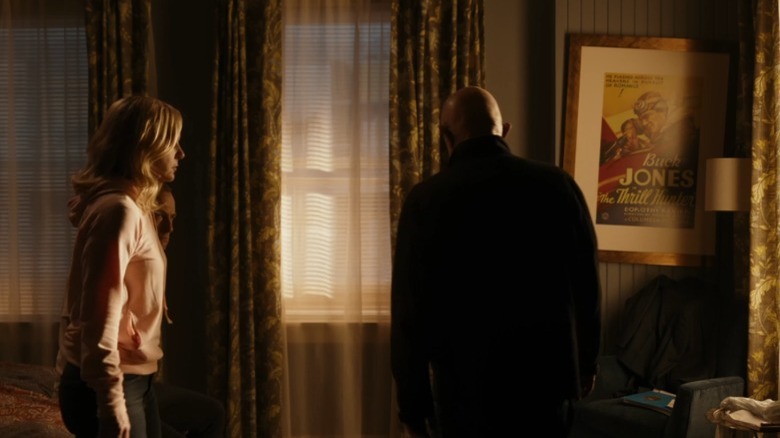 If Mike likes movies that relay a chaos that's opposite his own temperament, Kim and Jimmy seem to enjoy films that involve plenty of lying, double-crossing, and grand adventure. While Kim at one point cites the Gregory Peck-led adaptation of "To Kill A Mockingbird" as among her favorite movies, the rest of her taste is decidedly less idealistic than the story about honorable lawyer Atticus Finch. In one episode, she asks Jimmy if he wants to watch "The Thing," the 1982 John Carpenter horror classic about survival and mistrust in the Antarctic. In others, we glimpse posters in Kim's apartment for two 1930s films about criminals, "Outlaw Justice" and "The Thrill Hunter."

As with other movies referenced in the show, these two films may be shown less as direct clues about Kim's storyline and more as details that enrich our understanding her character and the kind of narratives that appeal to her. Though it's nearly impossible to find, synopses indicate that 1932's "Outlaw Justice" is a Western about an accused murderer who ends up teaming up with a woman rancher to take down a gang leader who's after her land. It's one of several films in the "Better Call Saul" oeuvre that includes a partnership between a criminal man and an equally capable woman.

1933's "The Thrill Hunter," however, might be the most telling of all the movies featured on this list. It follows a self-aggrandising stuntman named Buck (Buck Jones) who can't help but tell tall tales to win over a leading lady named Marjorie (Dorothy Revier). In the end, after the pair have endured several dangerous scenarios thanks to Buck's lies — including, once again, almost being killed by a gang — the stuntman vows to Marjorie to never lie again. 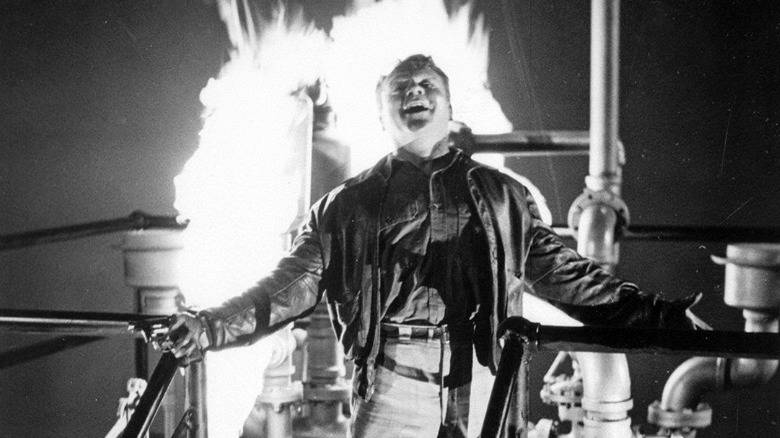 Yet at the end of "The Thrill Hunter," Buck can't help but slip back into a fib one more time before the fade to black. Certainly, there are parallels here between Kim and Jimmy's own lives, but that doesn't mean Kim will end up with Jimmy. Rather, the fact that they both know this is the kind of story she's a long-time fan of makes her own psychological pull towards the con man in her life feel all the more inevitable.

While Mike and Kim's chosen filmographies seem to convey subtle intertextualities, Jimmy's often feature obvious callbacks to "Breaking Bad," as well as more overt character connections. "Ice Station Zebra," for example, shows up in Gilligan's earlier series as the name of Saul's holding company which he uses to avoid paying taxes. In a second season episode of "Better Call Saul," Jimmy and Kim watch the 1968 Rock Hudson spy movie of the same name together, enjoying the adventures and double-crosses of the film about a British intelligence agent (Patrick McGoohan) and an American Commander (Hudson) on the hunt for a film capsule with international implications.

The same retroactive referencing happens with "White Heat": Jimmy/Saul mentions the film in "Breaking Bad," telling Walt (Bryan Cranston), "I guess that's why gangsters had molls. Gun molls. Haven't you ever seen 'White Heat?' Maybe you need a moll more than you need a wife who you can't trust with your secrets." It's a great throwaway comment, but gains significance when the movie comes up again in "Better Call Saul," as Jimmy tells Kim that it's on playing on TV.

When Movie Night Gets Too Real 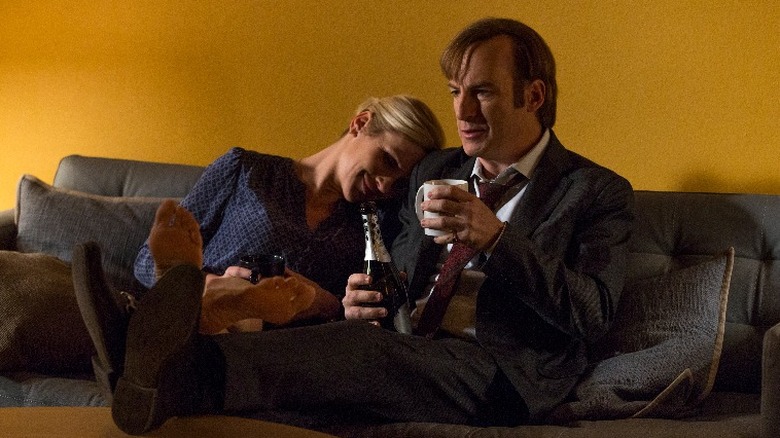 Of all the films referenced here, "White Heat" may share the most narrative DNA with "Breaking Bad." Among other things, it includes a train robbery, a narrow escape from law enforcement, and a climactic, unapologetic death scene for James Cagney's criminal. There's also, of course, the fact that Jimmy saw Kim as his partner in crime, if not exactly a "moll" — a term used in films like "White Heat" to refer to a gangster or criminal's loyal girlfriend.

The film references in "Better Call Saul" go on and on: "Doctor Zhivago," "After Hours," and dozens more make appearances, if not via footage on screen, then in references Jimmy makes in his cons and legal work. It's clear that for much of the series' run, Jimmy saw himself through a cinematic lens – as a Kevin Costner lookalike, or a David Lean protagonist, or a pre-code rapscallion.

The show's movie references have noticeably died down since the mid-season finale, when, as Schnauz tells THR, Jim and Kimmy are "eating dinner, drinking wine and watching a movie and this is when they're at their happiest." As "Better Call Saul" enters its already-heartbreaking endgame, Jimmy has become the crime movie antihero he loves to watch. Sadly, it turns out to be a life that looked a lot more fun when it was on TCM.

Read this next: The Most Ruthless Jimmy McGill Moments From Better Call Saul

The post What All the Old Movie References in Better Call Saul Say About the Characters appeared first on /Film.