The Borg first appeared "Q Who," the 16th episode of the second season of "Star Trek: The Next Generation." Clearly inspired by the artwork of H.R. Gi.. 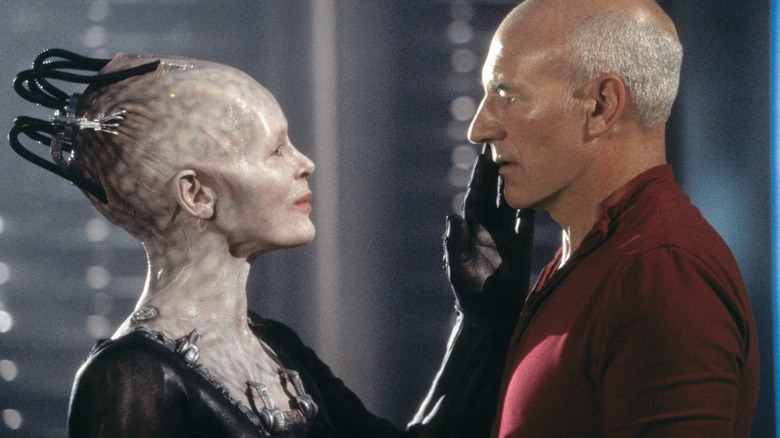 The Borg first appeared "Q Who," the 16th episode of the second season of "Star Trek: The Next Generation." Clearly inspired by the artwork of H.R. Giger, the Borg were an indifferent race of cyborgs whose only imperative was to gather technology and biological organisms to absorb into its collective. They all shared a single machine consciousness, and had no discernible human emotions to speak of. By the time Captain Picard (Patrick Stewart) and the crew of the Enterprise encountered the Borg, they had already become so overwhelmingly powerful that they were able to slice up the Starfleet vessel without much hesitation. Immediately, the Borg chilled audiences, and they would be brought back several times throughout "The Next Generation."

The Borg changed quite a lot upon the release of "Star Trek: First Contact" in 1996. In Jonathan Frakes' feature film, the Borg were no longer a collective, but a beehive, complete with drones, workers, and even a queen. The Borg were now sweaty and malevolent, and, most notably, had an emotional leader that could be negotiated with. This sweaty, negotiable version Borg would remain throughout the rest of Trek, with scheming, manipulative Borg Queens appearing on both "Star Trek: Voyager" and "Star Trek: Picard."

The Borg Queen was originally played by Alice Krige, who created a character that was both threatening and weirdly seductive. While other actresses played additional Borg Queens (Susanna Thompson played the role in three episodes of "Voyager," Annie Wersching in the second season of "Picard"), they were both emulating Krige, who would also reprise the role for "Endgame," the series finale of "Star Trek: Voyager." In an interview with The AV Club, Krige was invited to reminisce on the Borg Queen, and contemplate what it was like to move from film to TV.

Was It Good For You? 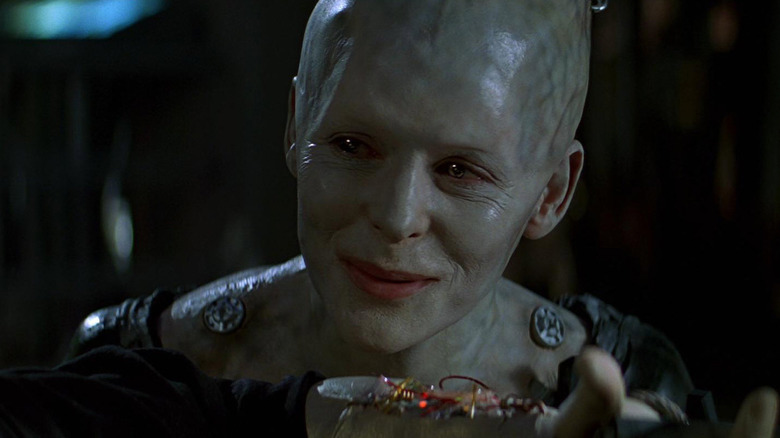 On TV, "Star Trek" tends to — generally speaking — skew more toward ethical dilemmas and discussions of morality. Each "Trek" gathers groups of resolute, mature, clear-thinking individuals and puts them in board rooms and around tables to discuss possibilities. "Trek" is best when it's talky. The "Trek" movies, by contrast, tend to be very action-forward, featuring resolute "villains" whom the "good guys" will merely have to fight. And the Borg Queen is one heck of a movie villain. She can read the minds of both Picard and Data (Brent Spiner), and tries to seduce them both into the collective, convincing them to join of their own volition. Later, in her episode of "Voyager," Krige uses the same slinky, metallic seduction techniques on Captain Janeway (Kate Mulgrew) and Seven of Nine (Jeri Ryan).

Krige acknowledges that the Queen, as a character, is something of a force of nature, starting with her casual omnisexuality, a term that, Krige admits in the AV Club interview, she wasn't initially familiar with. She was also concerned that the character's outsize presence might not be appropriate for American network TV:

"It was very terrifying, frankly, to shift mediums, to shift from an enormous screen down to a television screen. I thought to myself, 'Will she even work in this little space?' Two nights before, it dawned on me that I was working with two women and not two men. I called the producer and said, 'She's with two women.' He said, 'Don't worry. Think of her as omnisexual.' And I thought, 'Okay.' It was only after that I realized I didn't know what omnisexual was."

In the future, with so many species and genders in the galaxy, one must become omnisexual. 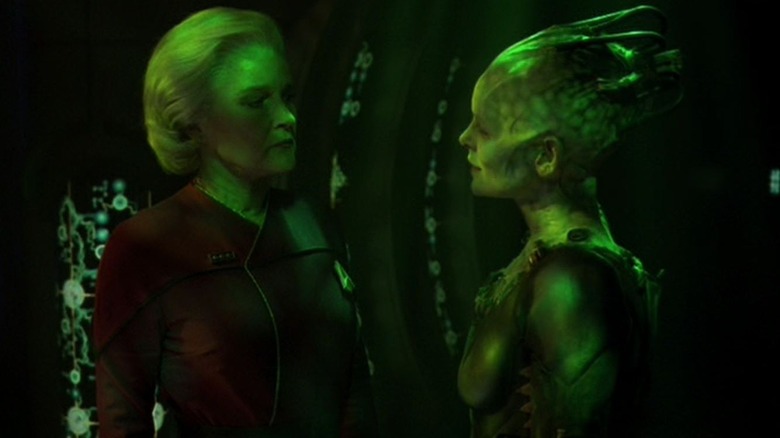 "Endgame" involves a Janeway from the future traveling back to Voyager's present to give our Janeway information on Borg technology that could bring the stranded ship back to Earth immediately. Naturally, the Janeways argue over the ethics of it all. Krige returned for "Endgame," taking over for Thompson; There are multiple Borg Queens, it seems, but they are all kind of share the same personality. Krige, in the AV club interview, feared that her version of the Borg Queen might have been too big — too scary perhaps, or too sexy — for the small screen. After all, the character is not only timeless but, Krige feels, literally immortal. She said:

"It was wonderful to experience her in a completely different context. And, quite frankly, no matter how many times they get rid of her, I think they are kidding themselves. She's out there. She was created. She cannot be destroyed. What a fascinating character she is. I have never asked them, and I would love to know, if they had any idea she was going to become an absolute archetype."

Krige admits that the character had become such a powerful archetype that it kind of took over. Something about the mechanical cenobite suite, the unusual makeup headpiece she wore, made the Borg Queen into an entity unto herself. Krige, at that point, let the character assimilate her, saying:

"I had no idea whether they knew. I certainly didn't. By the time they had put on the make-up and the suit, and I looked in the mirror, it wasn't me anymore. I really did feel like I was just a channel and the Borg Queen walked up, did her thing and left."

Krige will return as the Borg Queen in "Star Trek: Lower Decks," albeit as a humorous voice cameo.

The post It Was 'Terrifying' To Bring Star Trek's Borg Queen To TV appeared first on /Film.