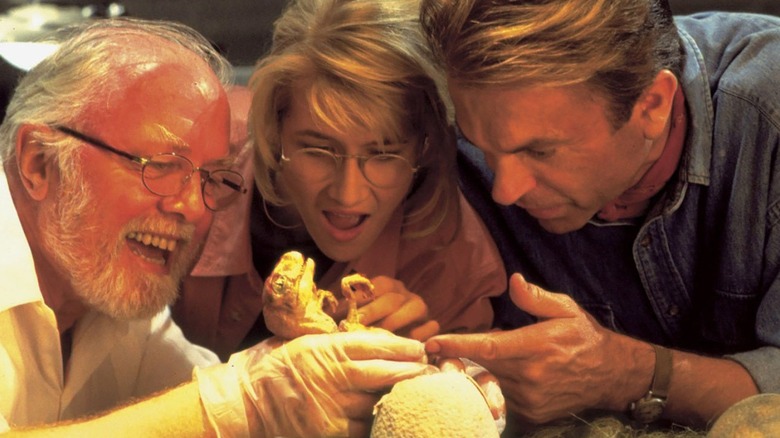 The "Jurassic World" franchise concluded its second set of film trilogies with 2022's "Jurassic World Dominion," which was a massive disappointment for many reasons. For one, "Dominion" chose to sideline the fate of the dinosaurs in favor of some hackneyed, bizarre plot that dragged down the entire narrative. However, the film's utter failure can be chalked up to the franchise not treating the dinosaurs as meaningful, core characters anymore.

The wonder and success of Steven Spielberg's first entry in the franchise, 1993's "Jurassic Park," cannot be replicated. A love letter to human curiosity, and a fantasy about what could have been, "Jurassic Park" wowed audiences with its practical effects created by Stan Winston and breathtaking stop-motion work by Phil Tippett. The dinosaurs were brought to life with the aid of computer-generated imagery, rendered in a way that was both convincing and fantastical. Spielberg and his crew pulled this off remarkably well: The scene in which Ellie (Laura Dern), Ian (Jeff Goldblum), and Alan (Sam Neill) see the Brachiosaurus for the first time is memorable for good reasons. The scene captures the utter awe surrounding the creatures and sets the tone for the film.

While explaining the process of adapting Michael Crichton's novel the film is based on, screenwriter David Koepp talked about how the dinosaurs were never referred to as "monsters" at any point. Koepp clarifies that this aspect was driven home with several directorial decisions throughout the film. Let us dive right into it.

How Jurassic Park Treated Dinos As Animals Acting On Their Instincts 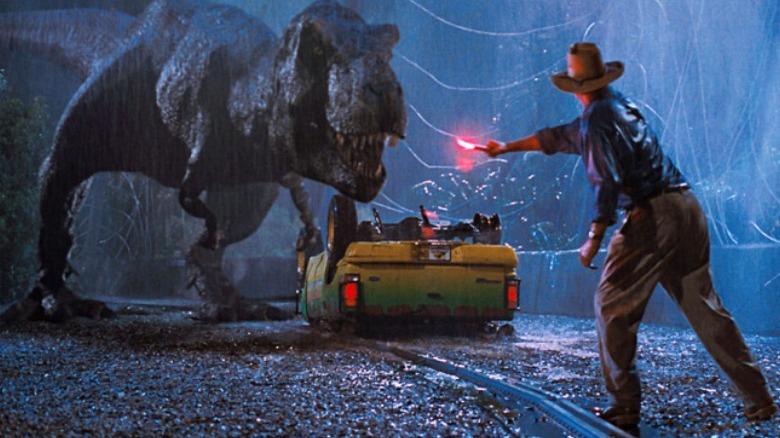 David Koepp spoke to University of California Television about the "rule" that guided the filming of "Jurassic Park." The dinosaurs are never portrayed as monstrous beings, which is highlighted during the scene wherein Alan gently rectifies Lex's statement that they're monsters. "They're not monsters, Lex, they're just animals," Alan says, reminding viewers they are simply creatures acting out of their evolutionary instincts. Koepp gave examples of scenes that corroborate this idea in the interview linked above:

"There was a rule that no one was allowed to refer to them as 'monsters.' They were animals doing what animals do. And there's a lot of very interesting juxtapositions that remind us of that in that very sequence. You see the raptor's eye and you see a snake, a reptile moving through the foreground. Later in the control room, you see the Velociraptor crowing or whatever it's doing, and its DNA code is being projected on it … There's a lot of that kind of directorial flourishes that I think really mean a lot."

Koepp's statement makes sense, as the first film portrays the dinos being initially curious about their surroundings, instead of being instantly predatory. When the T. rex breaks free, its first instinct is to explore the area and not immediately hunt the humans hidden nearby. A similar sentiment is mirrored in the Dilophosaurus scene, in which the animal appears playful when it encounters Dennis (Wayne Knight). It is only after Dennis asks the dino to fetch a stick like a dog that it reveals its aggressive nature and attacks him once he has his guard down after falling over. Dennis had clearly underestimated the creature — who knew that a small, seemingly harmless Dilophosaurus could spit venom and rip you apart?

How The Jurassic World Films Overturned Spielberg's One Rule 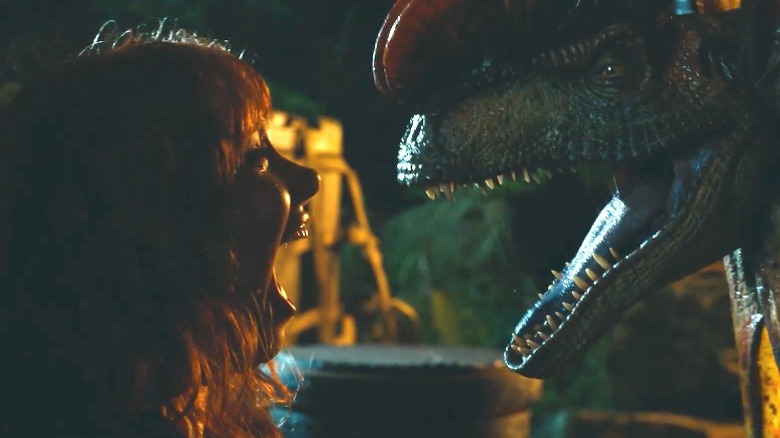 The shift from dinos being mere animals to full-fledged monsters had begun to take place in "Jurassic Park III," helmed by Joe Johnston. During Alan's opening auditorium lecture scene, he says Hammond and InGen helped create "genetically engineered, theme-park monsters" at Jurassic Park. Alan's words mark the shift in the franchise's treatment of dinosaurs as hybrid-killing machines as opposed to animals acting like animals, and this theme dominates the "Jurassic World" films at all points.

For instance, 2015's "Jurassic World" treats dinosaurs as movie monsters from the get-go. Gone is the genuine empathy and wonder surrounding the animals, except Chris Pratt's Owen, who seems to care a great deal. Everyone else involved, especially Claire (Bryce Dallas Howard), is motivated by corporate greed, and the dinosaurs become a bargaining chip and status symbol for those in power. Both "Jurassic World" and "Fallen Kingdom" portray the dinosaurs as monsters who attack humans unprovoked, as shown in the Pterosaur scene in the first film, in which the animal attacks tourists the moment it breaks free from confinement.

While "Dominion" completely loses focus when it comes to dinosaurs, director Colin Trevorrow takes the "supervillain" route when it comes to portraying the Giganotosaurus. Trevorrow explained his vision by saying he "wanted something that felt like the Joker," as the Giga "just wants to watch the world burn." This approach completely overturns Spielberg's original vision for the franchise and vilifies the hybrid dinos by attributing human vices to them.

Although Trevorrow's approach could have worked with the help of a thrilling, convincing story, "Dominion" failed to understand the basic premise that made the franchise so enduring: dinosaurs being dinosaurs.