How long will you stick with a new TV show before dropping it? According to acclaimed Japanese anime director Shinichirō Watanabe, the answer for most.. 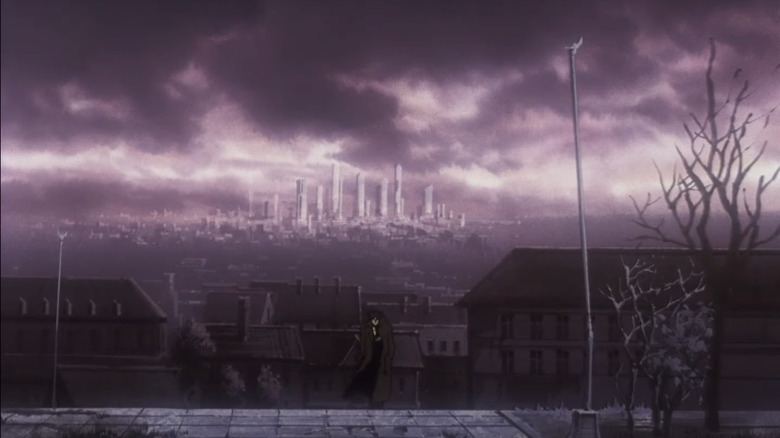 How long will you stick with a new TV show before dropping it? According to acclaimed Japanese anime director Shinichirō Watanabe, the answer for most people is five episodes. He was sure to keep this in mind when heading the production team for "Cowboy Bebop" at animation studio Sunrise.

In "Cowboy Bebop," episodes are called "sessions," a reflection of Yoko Kanno's jazz-flavored score and how important music is to the show's identity. The first session, "Asteroid Blues," has some vague flashes of protagonist Spike Spiegel's past. However, for the most part, the first four sessions are standalone vehicles for introducing the show's primary characters. Session 5, "Ballad of Fallen Angels," is when things start to heat up and Spike's past comes to the forefront.

Watanabe bet a lot on session #5 by pulling back the curtain. In what might be an inside joke about these high stakes, Faye Valentine discovers an Ace of Spades playing card early in the episode. The final shot is Spike picking up the same card. Watanabe's gambit paid off — "Ballad of Fallen Angels" is considered the series' first truly great episode and one of its high points. For one, it's the 2nd highest-rated on IMDB.

Watanabe and several of the other "Bebop" team members spoke at Japan Expo 2018, a convention held in Paris. Also on the panel was Toshihiro Kawamoto, character designer and "Ballad" animation director. Watanabe and Kawamoto both shared details of how they made the episode and how it fit into their aims for the series. 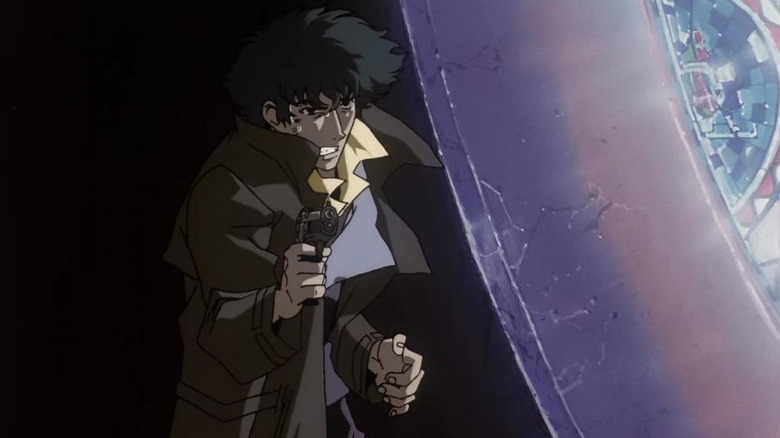 At the Japan Expo panel, the moderator mentioned how "Ballad of Fallen Angels" came back as fans' 3rd favorite episode on a survey they conducted. To sate curious fans, they asked Watnnabe and Kawamoto about it. Kawamoto, for one, mentioned how the episode made him realize how grand Watanabe's vision was, recalling, "By that point, I thought I had a decent grasp of Mr. Watanabe's vision for the series. Turns out I wasn't even close! It took hours of debating with him for me to somewhat sort it all out."

Watanabe added that, because of the session 5 theory he heard, he thought that, "I had to give it my all and cram the episode with all the ideas I had for the series."

For context: "Cowboy Bebop" was Watanabe's second directorial project. He had previously directed the 4-episode mini-series "Macross Plus," alongside series creator Shōji Kawamori. With "Bebop," though, there was no established brand to fall back on and they had to create a whole world on their own. Watanabe and his team (collectively credited as "Hajime Yatate") took a "throw everything at the wall" approach. "Bebop" is a genre melting pot, with a setting that mixes science-fiction, Westerns, and film noir and influences from the French New Wave to Bruce Lee Kung Fu movies.

According to Watanabe, Spike was the first "Bebop" character he conceived of; he had him in mind before the series itself. When it came time to show viewers all he had in session 5, it made sense that the story focused on Mr. Spiegel. But what new information does the episode share?

What Session 5 Tells Us 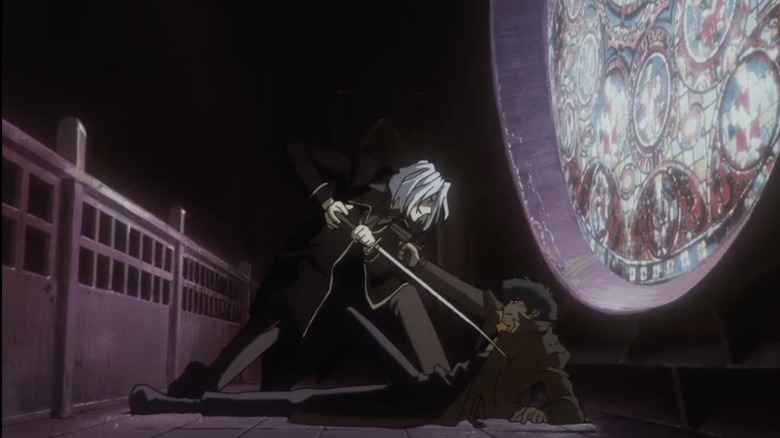 "Ballad of Fallen Angels" doesn't open with the Bebop crew, but the Red Dragon crime syndicate. Capo Mao Yenrai negotiates a peace treaty with a rival, but both parties are killed by Mao's sword-wielding lieutenant Vicious.

The scene shifts to the Bebop. Mao now has a bounty of 28 million woolongs (the currency in the "Bebop" future). Spike and then Faye want to go after it, but their partner Jet Black is more reluctant. While Faye gets herself caught by Vicious, Spike visits an old friend named Annie. The episode never outright exposits anything, but from the characters' dialogue we can put together the puzzle: Spike and Annie are both former Red Dragons and Spike was raised by Mao alongside Vicious. For to-be-revealed reasons, Spike faked his death three years before, leaving behind his old life and comrades. The bounty on Mao is Vicious' ploy to draw him out.

Spike goes to an abandoned church to confront Vicious — rescuing Faye isn't a priority but he winds up doing it anyway. Spike's fight with Vicious' ends with him being thrown out a window, but he manages to leave behind a live grenade for his foe; Vicious' survival is unclear.

As Spike falls, his life flashes before his eyes and he remembers an ethereal blonde woman. We learn in later episodes that this is Spike's lover Julia and their relationship caused Spike's falling out with a jealous Vicious. A heavily-bandaged Spike awakens three days later on the Bebop then gets smacked by Faye after he insults her singing.

Why Is Ballad Of Fallen Angels A Classic? 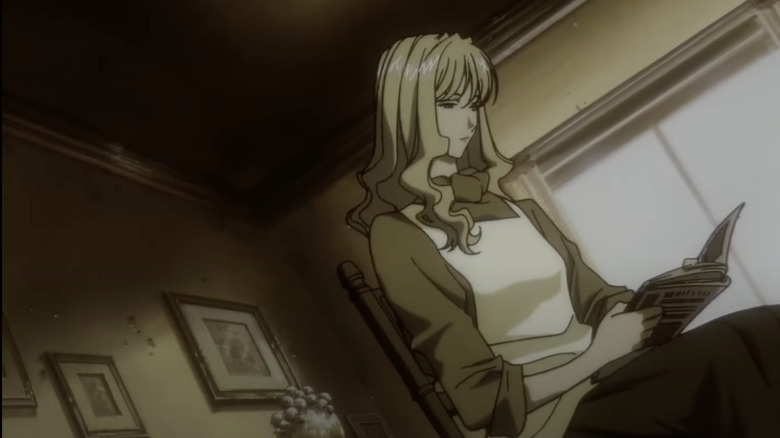 Watanabe wasn't lying when he said he crammed all his ideas into "Ballad of Fallen Angels." The episode feels like a test run for finale, "The Real Folk Blues," which features Spike and Vicious' final confrontation. This time, the two foes both escape death, but in the finale, they aren't so lucky.

Vicious is the series' only recurring villain; he returns in the two-part session, "Jupiter Jazz" and "The Real Folk Blues." Jet hints at his past too when he tells Spike he lost his right arm by being headstrong; we get the whole story in session #16, "Black Dog Serenade."

The episode changes what "Cowboy Bebop" is about. It's not just a show about four bounty hunters chasing after criminals, but about them running from their pasts. When Jet asks why Spike is so eager to confront Vicious, his partner just admits, "My past is catching up to me." Spike's been devil-may-care before, but here we realize he's downright fatalistic.

When Spike remembers his life while falling, the memories are short and quick, like fragments from a dream. His last memory is Julia singing to him by his bedside. He wakes up in the same situation, only now Faye is the one beside him. This ending is the core conflict of "Cowboy Bebop" — the past versus the present and dreams versus reality — in a nutshell.

On top of that, the episode has the best shot composition in the series to date, and Kanno gets to flex her creative muscle. The faux-Latin hymn "Green Bird" couldn't be more different than the show's usual upbeat Jazz score. Watanabe wanted "Ballad of the Fallen Angels" to prove what he and his team were capable of — and he succeeded.

Read this next: Anime Shows Like Cowboy Bebop That Are Worth Your Time

The post Cowboy Bebop's Episode 5 Was A Make-Or-Break Moment For the Series appeared first on /Film.