The Marvel Cinematic Universe has been around for well over a decade now, dating back to "Iron Man" in 2008. That initial film feels so humble compare.. 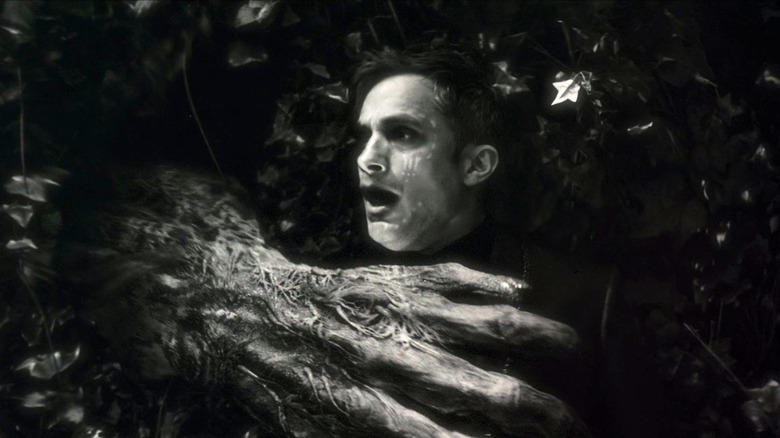 The Marvel Cinematic Universe has been around for well over a decade now, dating back to "Iron Man" in 2008. That initial film feels so humble compared to where we are now, with epics like "Avengers: Endgame" and even ambitious shows like "WandaVision" in the rearview mirror, with so much more to come in the years ahead. But the wealth of source material available to draw from in the pages of Marvel Comics represents so much more than capes and ultra-strong heroes. With the upcoming Disney+ special "Werewolf by Night," Marvel Studios is finally opening up the playbook a bit by going full-on horror. Yes, really.

Marvel's latest recently debuted at Fantastic Fest and I was in attendance. I can confirm that director Michael Giacchino's special, which introduces Jack Russell (Gael Garcia Bernal) as the titular monster, is full-on horror that just so happens to exist in the MCU. Giacchino, known for his Oscar-winning work as a composer on movies like "Up" and "Spider-Man: No Way Home," did not pull any punches.

It's a classic (and violent!) monster movie by way of the MCU that introduces key characters to the universe while telling a complete story in less than an hour. No small feat. We meet Jack Russell, as well as Elsa Bloodstone (Laura Donnelly) and yes, even Man-Thing, all within a tight 52-minute runtime. It's a new era for the MCU, and an extremely promising start to Giacchino's career behind the camera.

I had the good fortune of speaking with Giacchino via Zoom (as he couldn't come to the fest due to recovering from COVID). We discussed his fondness for Marvel's horror comics of the '70s, how the project came to be in the first place, what his future with Marvel could hold, and much more.

'That Was Our Church. And Our Religion Was Creature Double Feature' 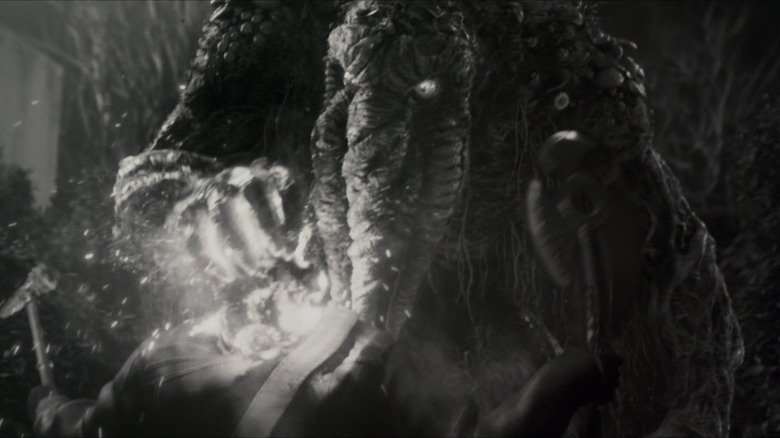 I am so happy and I'm so thrilled I get to talk to you, man. Seriously, I got to see "Werewolf by Night" last night. It was amazing.

Did you see it in the theater?

I was in the theater, man. It was great.

Amazing. Amazing. I was so bummed I couldn't be there. This whole time, I avoided the thing. And then the second we finished work and got ready to do this fun stuff, I got sick.

There's something about that run of horror comics in the '70s that I just absolutely loved. As a kid, I had my share of "Iron Man," and "Spider-Man," and "Avengers" comics. I had all those things. But the things that I almost treasured the most were the horror comics. I loved Werewolf By Night. I loved Man Wolf. I loved Man-Thing. I loved Dracula, Frankenstein. All of those things were incredible. My brother and I, we spent every Saturday watching monster movies. That's what we did. That was our church, and our religion was "Creature Double Feature". We were in front of that television every Saturday outside of Philadelphia watching "Creature Double Feature." So I have this huge, huge, huge place in my heart for those movies.

When you're doing, especially something like "Creature Double Feature," you're served up everything. You get the Hammer Horror films, you get the Universal films, you get the Japanese monster movies, you get everything. It was just a smorgasbord of delights that we grew up with. I think that had a lot to do with it. Also the fact that they had done such great work in the MCU with all of the main characters, all the superheroes and all of that stuff. I honestly didn't know what I could add to that. But this was an area of the MCU that had been untouched.

I don't want to spoil anything for anybody, it's straight-up horror. Let's be very clear. It's full-blown horror. Was there any pushback on going that hard at all? Because you went for it.

I did go for it. It became a joke on set while we were shooting, which was like, when they would ask me, "What do you think, Michael? What do you think?" They would stop me and they'd go, "Let me guess. More blood?" I'd be like, "Yes, more blood." Or, "Can we amputate this thing? Or can we do that?" And they would be like, "Oh God, oh God, what are we making here?"

But I think everyone was having so much fun because we were pushing those boundaries. We weren't making a sadistic movie, we weren't doing a slasher film where people are just indiscriminately killed for no reason at all. There's heart to this, there's empathy in this, and there's adventure, there's humor. I think when you balance all those things out, you can get away with a lot more than you would if you just went straight on slasher. The other thing I think we had in our favor was we were making a black and white movie. I feel like that helped us as well get away with some of this. Whereas otherwise, maybe we wouldn't have.

'We Never Shied Away From The Fact That, Okay, Yes, This Exists In The MCU' 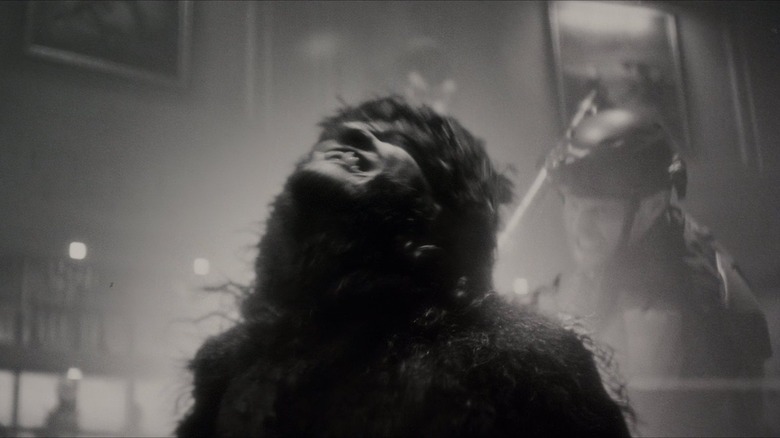 It's a tight 50 minute thing. It's not quite a feature. So was it your choice to go with the short length? Or was that kind of the mandate with it?

Well, there was never a mandate. It was always just like, well, what do you think if we did this? Or what would this be? How about this? And Kevin said, one day to me, he goes, "Why don't we make it a special? And let's see what happens. We make it a special." I was like, "Well, one of the things I love about 'Twilight Zone' was that it was always a self-contained story in under an hour." And I said, "I think that would be great to do that." I said, "That absolves us from having to do too much of an origin story and too much of what happens after, and we can just concentrate on what we're doing."

We always looked at it as a night in the life of Jack and Elsa [Bloodstone]. We never shied away from the fact that, okay, yes, this exists in the MCU. Somewhere else in the world at this very moment, Spider-Man is swinging on something and Captain America's doing something, but we're not going to bother with that. We're just worried about this moment right here, wherever we are. We never say where we are. We never say exactly where we are, but it's within the realm of the MCU for sure. Then we'll see where we go from here. Who knows? But it was never a mandate. It was always just something that we drove towards.

I don't want to get too away from the point here, but last night during the Q&A, you'd mentioned for the first time in your career, you don't really know what's next. But you did, I believe, mention you wanted to direct more. Marvel likes to keep things in the family. If they come to you and said, "Would you like to do a full movie?" Is that something you would do given the time that would take?

I have found such friends and such … Marvel is a family to me. They're part of my family. I've done so much work with them, and we have gotten to know each other so well. Anytime one of your friends says, "Hey, you want to do this?" You're apt to go, "Absolutely." Because you trust them, you love working with them. So who knows what's going to happen. But yes, that would be great. I would absolutely jump at anything like that. It would be a lot of fun. Like I said, there's nothing specific at the moment, and even in the music world, I don't have anything super specific and I'm just waiting. So it's a needed break, especially after six movies, scoring six movies and directing this one. Over the past year and a half, it's been a lot. A break is nice.

I cover this stuff for a living, so I kind of followed the trajectory of this. It feels like this was done on a pretty quick turnaround.

Yeah, well, we worked for about two years, I guess, that we worked on it. But a lot of that was in development and getting everything prepped. But we were in Atlanta, we shot it in Atlanta, and I was there for two months total and came home for editorial. And we did all that here.

So one last thing before we go, look, it's the MCU. The implication is that this might just be the very beginning with these characters and it was kind of your choice to introduce them. Have we gotten any indication, or do you have any indication as to when or where we might see Jack or Man-Thing again?

No idea. But that would be nice to see them again, wouldn't it?

Yeah, no, I got to tell you before we go, so, okay, Werewolf By Night is so cool. But you got Man-Thing in there. How cool was that, that you got to do that?

I know. I felt so lucky when Kevin came to me and said, "Hey, what do you think about Man-Thing?" And I was like, "Really?"

Oh, that was Kevin's idea?

Yeah, yeah, yeah. Kevin, he was always in the mix, but it was always in the mix with a bunch of other things. We were kind of in the very beginning figuring out what we wanted to do. Kevin really loves that character and why wouldn't you? It's one of the best. And that comic run is one of my favorites in the world. I love it.

Oh, it's the best. It's just so, so beautiful. And the artwork is incredible. Yeah. So that was one of those things. It was just like, I feel very lucky to not only have been able to bring in Elsa and Jack, but to bring in Man-Thing too. That's a huge, huge, huge thing. And I feel forever grateful.