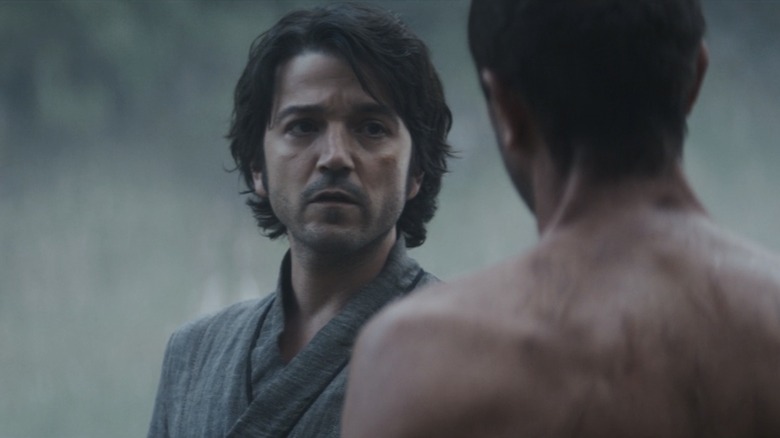 There will be spoilers for "Andor" Episode V – "The Axe Forgets."

"The Axe Forgets" is the fifth episode "Andor," the middle part of the Aldhani story-arc. With more characters spreading out across the story, it splits its time between Cassian (Diego Luna) on Aldhani, working toward the heist of the Imperial payroll, Mon Mothma (Genevieve O'Reilly) and her domestic and political troubles, Dedra (Denise Gough) and her plotting in the Imperial Security Bureau, and Syril Karn (Kyle Soller) as he reexamines his future prospects with his overbearing mother.

Each story moves the story forward to its climax for next week, leaving us on one more cliffhanger for this middle chapter. Through the story, motivations of what drive the rebels on Aldhani are revealed, as is Cassian's secret life as a mercenary. Nerves fray as the heist nears, but all systems are go.

Fighting The Distrust Of Fascism 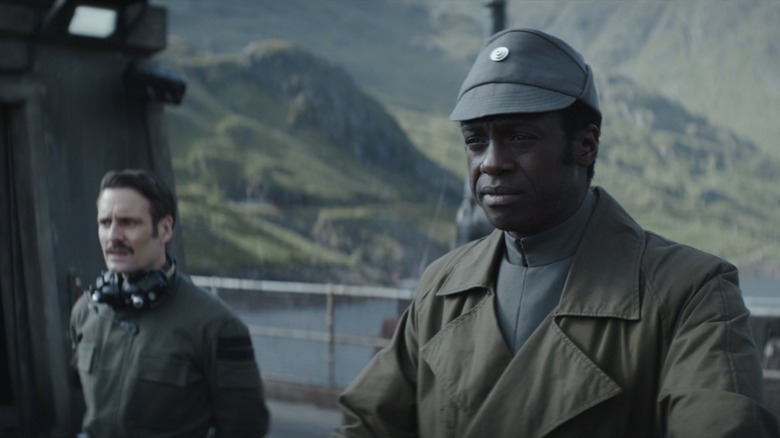 One of the central focuses of this episode is the motivation behind each character in the rebel group on Aldhani as they search for reasons — any reason — to trust Cassian, who they know as Clem. He arrived out of nowhere, has nothing, why would they trust him?

Skeen (Ebon Moss-Bachrach) is the most distrustful, as Cassian dodges every opportunity to explain what he believes and why he hates the Empire. But Cassian doesn't seem to particularly hate the Empire any more than he hates any other system that might bear down on him. Because he struggles to connect with Skeen, it only fuels his distrust. This tension of what people believe and why they're fighting is a feature of fascism in the context of the Empire. They have spies everywhere, they watch everyone's every move, and anyone can sell them out. With Cassian's keen eye for people and details, he could be cataloguing the information to report to the Empire as easily as fulfill his duties in the mission.

That's the insidious thing about a system like the one Palpatine has set up with the Empire: no one trusts anyone. Shmi Skywalker lamented that the biggest problem in the universe is that no one helps each other and this system forces people to trust each other even less, making the potential for that help even more scarce.

The writing for this episode is nothing short of fantastic, as each character in all of the varied storylines skirts around their truth, keeping the core of their motivations so close to the chest that it might suffocate them. 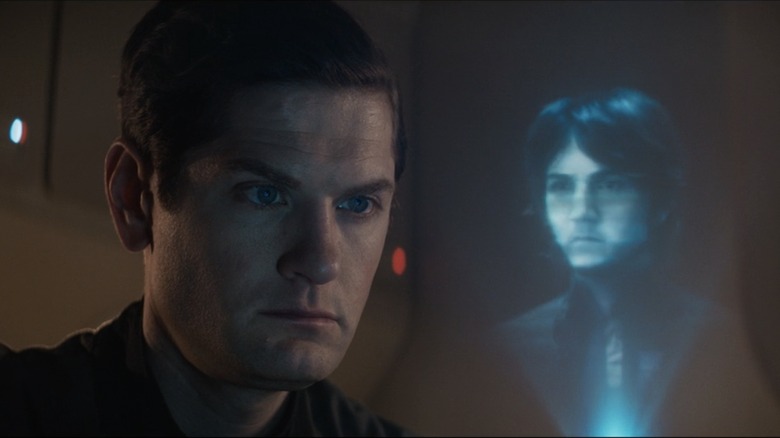 Though we'll have to wait until the next episode to see how successfully it pays off, pay careful attention to how well the filmmakers acclimate us to the stakes of the heist and what details we'll need to know for it to be as thrilling as possible. And when something inevitably goes wrong, we'll know it immediately, because we have been given a very clear idea of what is supposed to happen. This episode introduced more and more spatial geography to help us understand and even showed us the rolls of credits they look to be stealing.

But that's not the only context being built for the future of the show, both in future arcs and episodes. For the Imperial Security Bureau, it's the lengths they're willing to go to in order to put a stop to the sort of plundering that Cassian is best at. There's also a seeming connection between the trail they're following and Luthen Rael (Stellan Skarsgård) — there was a theft at Fondor they're tracking and his ship is from Fondor. Rael stresses that there are already two connection points that would tie him to the heist on Aldhani, but the narrative implies there are more chances than that, laying the ground work for the spy game hunt that will likely ensue in future episodes.

The drive and motivation of Syril Karn is another aspect of the show that builds context for later. With all of the other characters shielding their motivations, we're given a window into the object of Karn's fury: Cassian Andor. The contrast between what the Empire cost the rebels and how they live in the dirt and what Cassian cost Syril and how he lives in luxury is striking. He feels he's lost as much or more as any of the rebels and he places the blame squarely on Cassian Andor, so his drive to undo him will burn as greatly as a Death Star super laser in future episodes, mark my words.

Details To Watch Out For 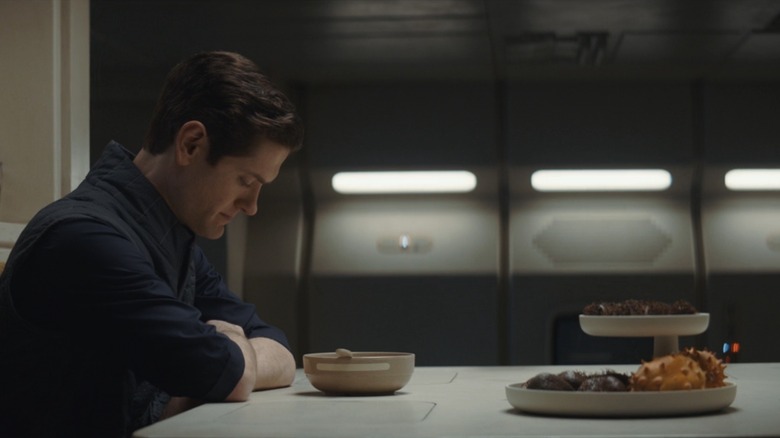 This is another episode that's a little light on inter-connectivity to other bits of the "Star Wars" lore, but there were definitely some winks to fans of the franchise on the show.

The first, most noticeable, would be the meilooruns on Syril's table, next to his blue-milk cereal. Meiloorun fruit was introduced to the "Star Wars" universe in "Star Wars Rebels" and it was Hera Syndulla's favorite snack. You can see meilooruns in person at Galaxy's Edge inside the Docking Bay 7 quick service restaurant in the Disney theme parks.

There were some new details added in this episode to Cassian's backstory as well as Skeen's, as they exchange oblique information about the detention and correction camps they both spent time in. Krayt Head, "By the Hand," and the Sipo Youth Center, were all references new for this show but are used to illustrate the sort of cages they built for people like Cassian and Skeen.

There's a list of planets where thefts of Imperial property occurred according to Dedra and her assistant: Kessel, Fondor, Jakku, Base Cay, and Steerguard. Kessel is obviously where the spice mines are located (and one even wonders if the theft and escape she could be referencing Han Solo's adventure there, as seen in "Solo: A Star Wars Story.") Fondor we've talked a lot about last week, but was the site of important Imperial shipyards. Steerguard and Base Cay seem new for this show, but Jakku's mention is curious. At this point in the timeline, Jakku was a ball of sand that had been used by Palpatine in these years to build his contingency plan and, eventually, give birth to the First Order.

One of the biggest reveals in this episode is that Mon Mothma had a daughter. In the first episode we learned she had a husband, but now her daughter, Leida, is here. The visual storytelling of the relationships between the family of Mon Mothma speaks volumes, even their placement around the table feels reminiscent of the storytelling Orson Welles did in "Citizen Kane." Since we see nothing of Mon Mothma's family in her life leading the Alliance to Restore the Republic, it makes one wonder how much she had to give up in order to lead the rebellion against the Empire. 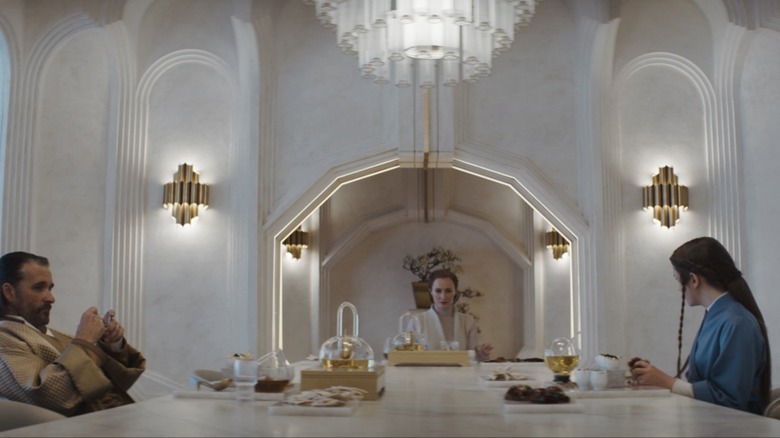 The writing on this show is nothing short of stunning. The dialogue is whip-smart and all of it reveals deeper layers to each character. What they're not saying is as important to read as what they are. The great screenwriting teacher Robert McKee once said that science fiction and fantasy dialogue couldn't have subtext because of the inherent exposition of the genre and I feel like the Gilroys are working doubly hard to prove him wrong one episode at a time.

Though Cassian's story, naturally, takes up most of the space of the episode, it is important to note how incredible it is to see the layers peeled back behind Mon Mothma and Syril Karn. These two characters are such opposites in ideals and methods but are both so deep and interesting to explore in this context. Watching Mon Mothma's personal life fall apart around her and see that her family hates — or at the very least resents — her stings. She's been held up as this paragon of virtue for the Rebellion and to see how difficult her life at home could be hurts in some ways.

For Syril, watching him return home to eat cereal and be berated by his mother is somehow satisfying, like it's something his character deserves. But it's only going to further stoke the hatred he has for Cassian Andor, the man he blames for taking away his position and everything else he held dear in the galaxy.

The show continues to take cues from the great dramatic playwrights-turned-screenwriters of the '70s and gives us character studies that seem to fit in the "Star Wars" universe in a way we haven't seen before. It's just good storytelling, no matter what universe we're in. Sure, I'm not watching this one with the kids anymore, but maybe it's okay that this one is just for me.

I maintain that "Andor" is some of the most well written television being produced right now, and it's telling stories that reflect the capitalist boots at our neck in our own world. My hope is that Cassian goes on his journey, seeking reasons to fight for the greater good rather than his own selfishness, folks watching in the real world can learn that as they go, too.

That's what good art does, right? It works to overturn the horrible things about the status quo?

Edward Abbey once said that the two chief responsibilities of artists were "(1) art; and (2) sedition." And I think it's safe to say that Tony Gilroy and crew are fulfilling all of their artistic responsibilities with this show.

The post Andor Episode 5 Peels Back the Layers on the Star Wars Galaxy appeared first on /Film.

Next post What Do Arvel Skeen's Tattoos Mean In Andor Episode 5?