In this edition of TV Bits: Netflix has already canceled Spinning Out. Benjamin Bratt joins the cast of HBO Max’s DMZ. Power gets three spin-offs at ..

I have no idea what Spinning Out is, and apparently I’m not alone, because the Netflix series has already been canceled after one season. The series, which featured Crawl‘s Kaya Scodelario as a figure skater, just premiered in January. But there was apparently not enough buzz to keep it going any longer, as Deadline says Netflix has pulled the plug. Sorry, Spinning Out stans. You’ll have to watch one of the other 4,000 Netflix originals instead.

HBO Max’s DMZ, based on the DC Comics series of the same name, is adding Benjamin Bratt to its cast, according to Deadline. He joins Rosario Dawson in the series, which is being directed by Ava DuVernay. The show “is set in the near future where America is embroiled in a bitter civil war, leaving Manhattan a demilitarized zone, destroyed and isolated from the rest of the world. DMZ chronicles the harrowing journey of fierce medic Alma Ortega (Dawson), who saves lives while desperately searching for her lost son. As she contends with the gangs, militias, demagogues and warlords who control this lawless no man’s land, she becomes the unlikely source of what everyone has lost: hope.” Bratt plays “Parco Delgado, the popular — and deadly — leader of one of the most powerful gangs in the DMZ.” 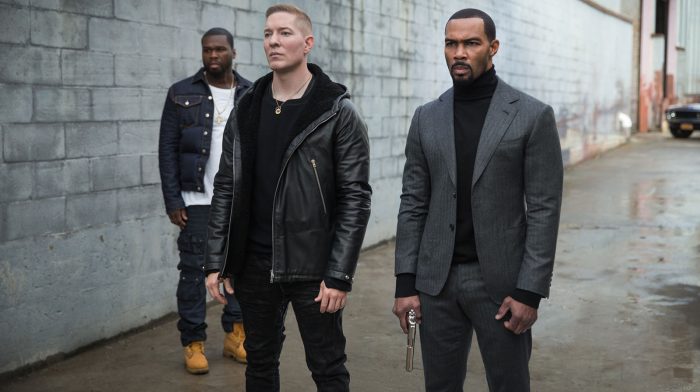 The Starz series Power may have come to an end, but it’s the series will live on with four spin-offs. One spin-off – Power Book II: Ghost – was already announced, and you can even watch a teaser for it here. And now Variety says three others, Power Book III: Raising Kanan, Power Book IV: Influence, and Power Book V: Force, are coming as well. Here are some details:

“Raising Kanan” is a prequel set in the ‘90s during the early years of “Power” character Kanan Stark. “Influence” will follow Rashad Tate in his pursuit of political power. “Force” centers on Tommy Egan after he cuts ties and puts New York in his rearview mirror for good. Larenz Tate will reprise his role as Rashad Tate in “Influence,” while Joseph Sikora will return as Tommy for “Force.”

Climate activist Greta Thunberg will be the subject of a new BBC Studios TV series, according to Deadline. The show will follow Thunberg’s “global climate crusade, it will feature a chorus of experts laying out the science behind her mission. It also promises to share some ‘quiet moments’ as Thunberg prepares her speeches and reflects on her life as a teenager like no other.” There’s also a Hulu documentary about Thunberg due out this year.

Billions, the show about a crazy guy named Bobby Billions, is back! Okay, that’s not what Billions is about, but I can dream. The Showtime series starring Damian Lewis and Paul Giamatti is returning for a fifth season, and there’s a new trailer to get you hyped.

In season 5, “Bobby Axelrod (Lewis) and Chuck Rhoades (Giamatti) see their vicious rivalry reignited, while new enemies rise and take aim. Social impact pioneer Mike Prince (Corey Stoll) poses a true threat to Axe’s dominance, and Chuck feuds with a formidable district attorney. Taylor Mason (Asia Kate Dillon) is forced back to Axe Capital, where they must fight to protect their employees and their assets. Wendy Rhoades (Maggie Siff) reevaluates her loyalties and forges surprising new alliances that put her at odds with both Chuck and Axe. This season, the struggle for power becomes a struggle for survival, and all characters must adapt or risk extinction.” The new season premieres Sunday, May 3 on Showtime.

You can check out a new look at Mrs. America above. The FX series starring Cate Blanchett “recounts the movement to ratify the Equal Rights Amendment (ERA) and the unexpected backlash led by Phyllis Schlafly, aka ‘the sweetheart of the silent majority.’ Through the eyes of the women of the era, the FX series explores how one of the toughest battlegrounds in the culture wars of the ’70s helped give rise to the Moral Majority and forever shifted the political landscape.” The show arrives on April 15.

I’ve heard of big fires everywhere, but little fires everywhere? Madness! Hulu’s Little Fires Everywhere “follows the intertwined fates of the picture-perfect Richardson family and an enigmatic mother and daughter who upend their lives. The story explores the weight of secrets, the nature of art and identity, the ferocious pull of motherhood – and the danger in believing that following the rules can avert disaster.” Reese Witherspoon and Kerry Washington star in the 8-episode series, which premieres on March 18, 2020.

Next post Samuel L. Jackson to Play a Retired Hitman in New Movie, Finally Doing Something Different For Once