“You can’t escape a mother’s love.” That’s the tagline for Run, the newest thriller from the filmmaking team behind the 2018 hit Searching. This time..

“You can’t escape a mother’s love.”

That’s the tagline for Run, the newest thriller from the filmmaking team behind the 2018 hit Searching. This time, they have Sarah Paulson playing an intense and overbearing mother and newcomer Kiera Allen as her teenaged daughter, who’s raised in isolation and soon discovers that her relationship with mommy dearest is more sinister than it appears. Check out the film’s first trailer below.

Run, not to be confused with the upcoming Phoebe Waller-Bridge HBO series of the same name, is the new movie from Searching director Aneesh Chaganty. Searching producer Natalie Qasabian and producer/co-writer Sev Ohanian return in those same capacities here, with Ohanian again tackling the screenplay alongside Chaganty. Searching played out entirely through screens – FaceTime conversations, texts, Skype sessions, browser searches, and more – and put an excellent tech-heavy spin on a classic detective story. But in interviews at the time, Chaganty promised that his next movie would be shot in a more traditional way. Now, a little over two years after Searching played at Sundance, we’re finally seeing the fruits of this team’s labor. (By the way, they do have a Searching sequel coming up, too.)

This movie marks Kiera Allen’s first time acting in a feature. The actress and her character both use a wheelchair, and she spoke last year about the movie’s groundbreaking approach to that. (I think it’s the first studio movie to ever star a wheelchair user.)

“To see a character in a wheelchair who is, not to give too much away, but who is really kind of a hero and is her own person, and has her own mind and her own journey independent of her disability, and to see a character whose journey is really not defined by her disability; it’s defined by who she is as a person is a really cool thing because I’m an actor, I’m a person first. I don’t come in to play a disability, I come in to play a person, and to have that opportunity is really cool.”

Check out the killer Saul Bass-inspired poster, which Reddit users have compared to this poster for the 1988 horror movie Pin: 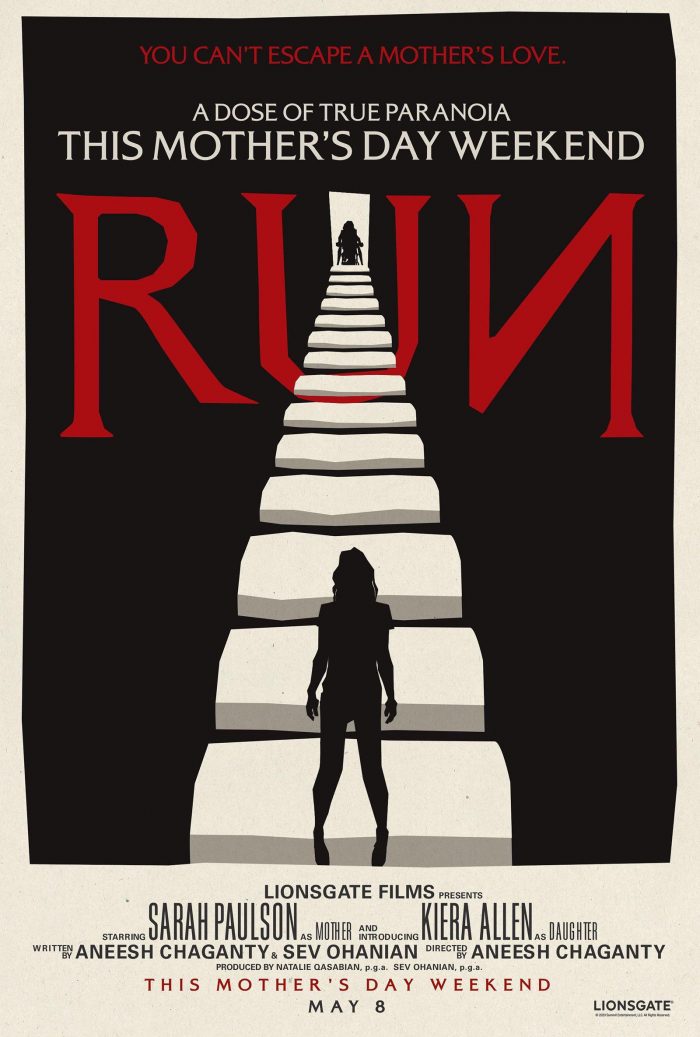 Run was originally set to hit theaters at the end of January, but got bumped back to a Mother’s Day release this coming May. That strikes me as a big vote of confidence from Lionsgate, and from the sound of it, the filmmakers were very pleased to not have their movie be dumped in the early part of the year:

Despite the way this headline reads, this is actually very, very good news for “Run” – in theaters everywhere Mother’s Day. ??? https://t.co/mFSSaSq4Nb

Previous post ‘Brahms: The Boy 2’ Clip Reminds You to Not Let Your Kids Play With Creepy Dolls