Back to the Future: The Musical started early previews at the Manchester Opera House just last week. Unfortunately, since the show is only playing in .. 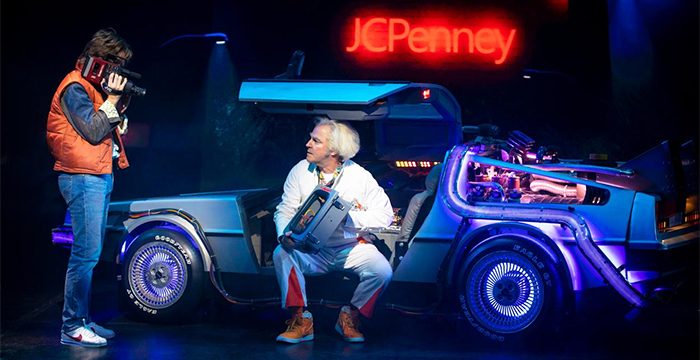 Back to the Future: The Musical started early previews at the Manchester Opera House just last week. Unfortunately, since the show is only playing in London until the middle of May, that leaves a lot of Back to the Future fans unable to check out the lively show from Tony Award-winning director John Rando (Urinetown, On The Town). But the good news is you can get a little sneak peek at what the show looks like thanks to some Back to the Future: The Musical photos from the first week of shows for the stage production. They even have a full scale DeLorean time machine on stage.

Back to the Future: The Musical Photos 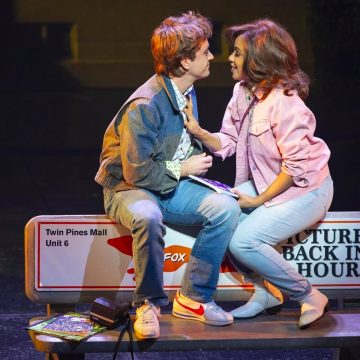 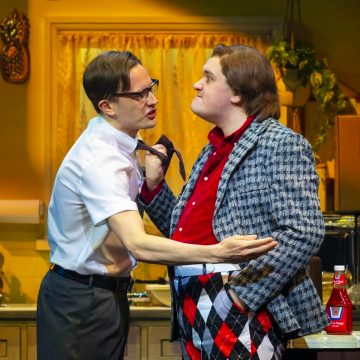 A couple photos from earlier in the story introduce us to Olly Dobson as Marty McFly and Courtney-Mae Briggs as his girlfriend Jennifer Parker, as well as Hugh Coles as George McFly and Aidan Cutler as Biff Tannen. There’s not much musical action happening in this scene, but how about this: 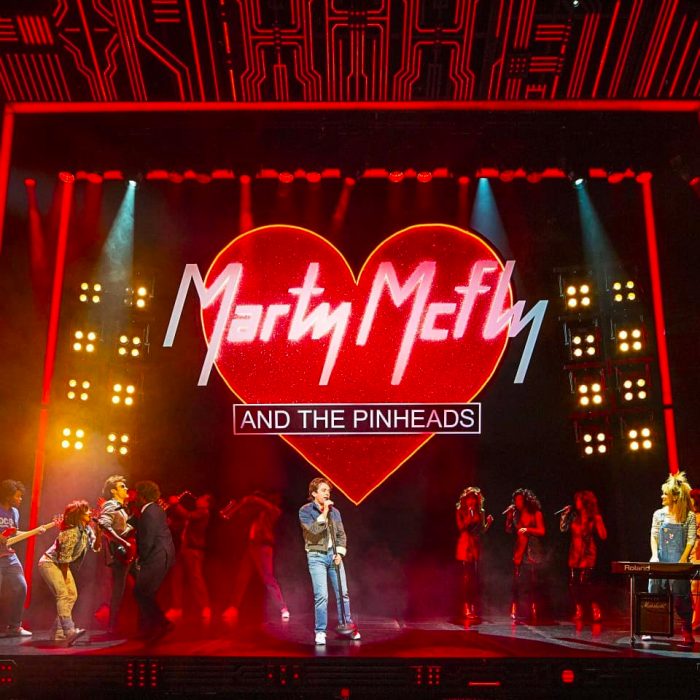 It looks like Marty McFly’s audition to be the band at the upcoming school dance got turned into a full fledged musical sequence. You have to wonder what the lyrics of this song will be since the audition by Marty McFly and the Pinheads was nothing more than an instrumental hard rock rendition of “The Power of Life” by Huey Lewis and the News.

Now let’s get to the time traveling. This is Back to the Future after all, and we need to see a time machine. 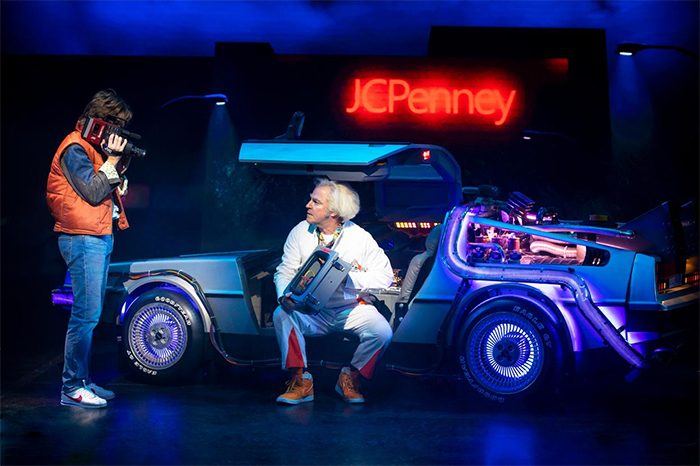 It looks like some sets are being created with backdrops instead of set pieces. That makes sense considering recreating elements of a shopping mall parking lot can be rather difficult, especially when you also have a full-side DeLorean time machine to deal with. So how to they recreate the scenes where the DeLorean has to drive? Take a look: 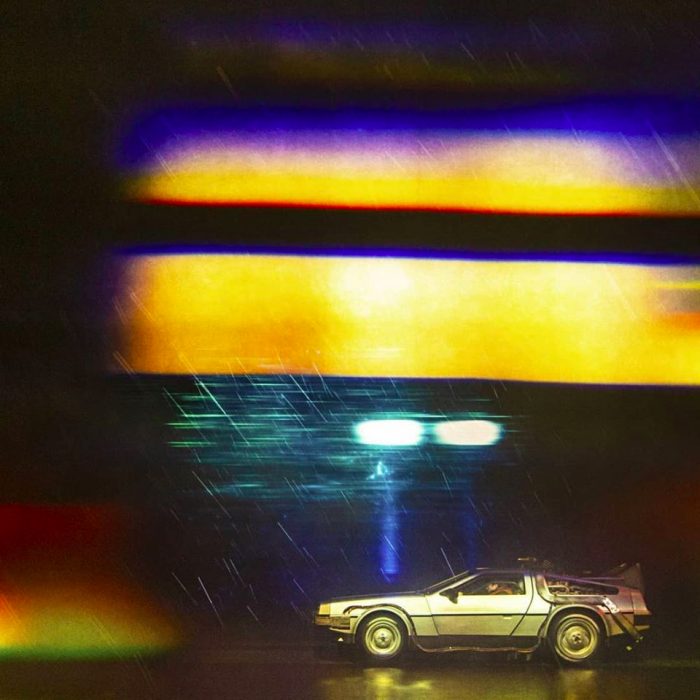 It appears that the background of the stage is a massive screen that can be used to make it look like the DeLorean is driving, as well as using other motion elements in an almost music video montage style sequence of headlights, passing road stripes and rain. But the DeLorean sees a little bit of motion on the stage. 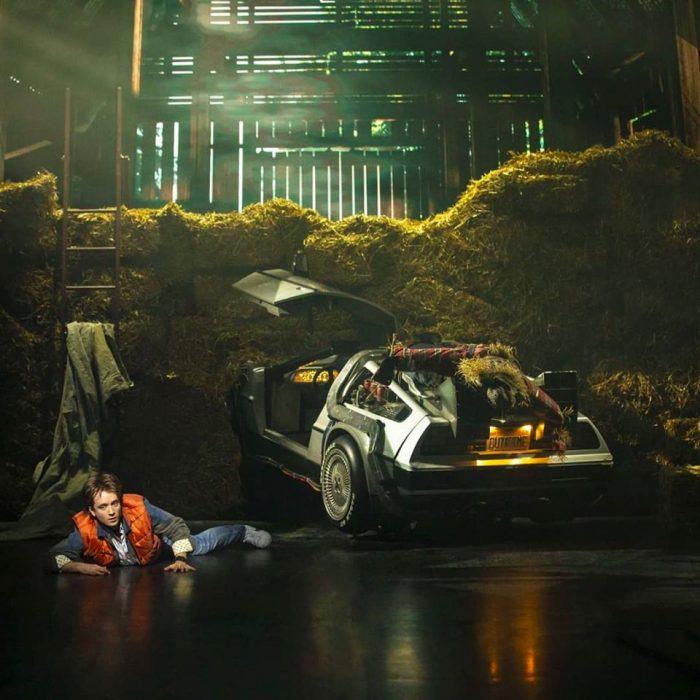 Here’s the scene where Marty McFly has crashed the DeLorean into Old Man Peabody’s pine tree farm barn. It’s partially covered in hay and propped up a bit in the front. Marty’s not wearing the radiation suit, which he does when stumbling out of the car in the movie, but perhaps there are some differences between the movie and the musical. 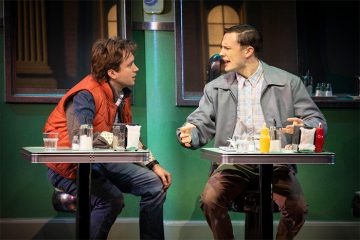 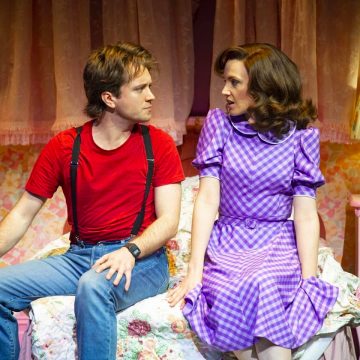 It wouldn’t be Back to the Future without Marty McFly running into the younger version of his parents, including Rosanna Hyland as Lorraine Baines. I wonder if there’s an uncomfortably flirty musical number that Lorraine performs while hitting on his future son. That would certainly be something to see. 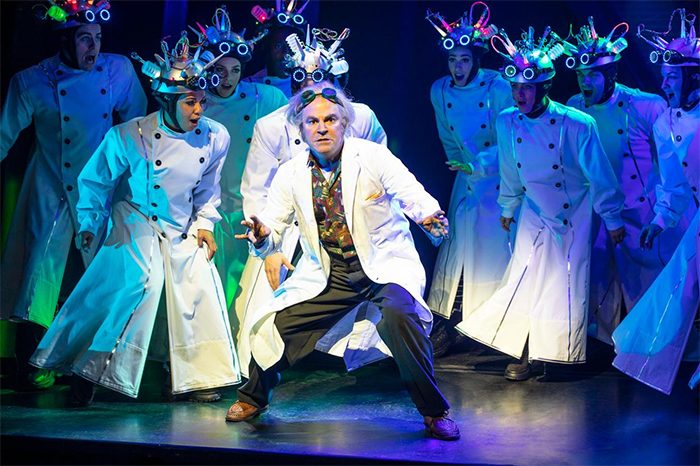 Doc Brown appears to get his own big musical number with a bunch of other fellow scientists as back-up dancers. That’s Roger Bart as Doc, looking perfectly wired as the wild inventor. 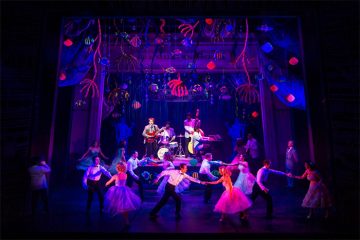 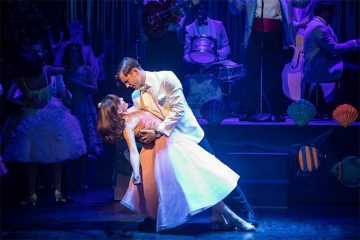 Finally, it should come as no surprise that the prom finale is a big musical number, including a new version of “Johnny B. Goode” performed by Marty McFly and the Starlighters. And that climactic, life-saving kiss looks rather cinematic on stage too.

If Back to the Future: The Musical is a success across the pond, perhaps we’ll see it come to the United States. If not, we’ll have to build a time machine of our own in order to go see it. Thanks to London Theatre Reviews for bringing the photos to our attention.

BACK TO THE FUTURE The Musical is directed by Tony Award-winning director John Rando (Urinetown, On The Town) and stars Roger Bart (Desperate Housewives, Stepford Wives, The Producers) as ‘Doctor Emmett Brown’, Olly Dobson as ‘Marty McFly’, Hugh Coles as ‘George McFly’, Rosanna Hyland as ‘Lorraine Baines’ and Cedric Neal as ‘Goldie Wilson’.

Based on the Universal Pictures/Amblin Entertainment film, BACK TO THE FUTURE The Musical will have a book by Bob Gale, featuring 16 new songs with music and lyrics by Emmy and Grammy Award-winning Alan Silvestri and six-time Grammy Award-winning Glen Ballard, with additional songs from the film including The Power of Love and Johnny B. Goode.

The post ‘Back to the Future: The Musical’ Photos Reveal the DeLorean on Stage, Dancing Doc Browns & More appeared first on /Film.

Next post ‘The Hunt’ Trailer: Betty Gilpin Beats the “Elites” at Their Own Game