Gentlemen to bed! For the hilarious semi-fictionalized food tour led by Steve Coogan and Rob Brydon is coming to an end. Coogan and Brydon reprise the.. 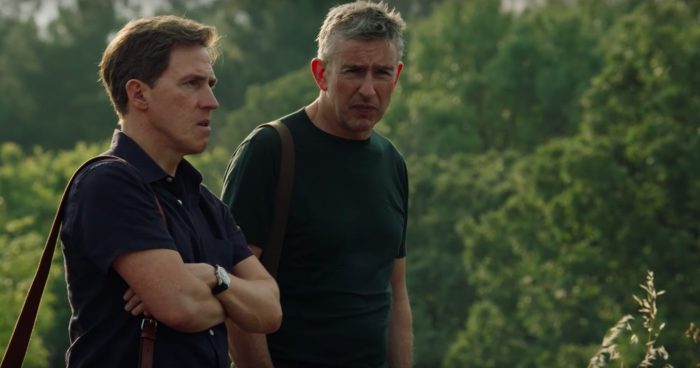 Gentlemen to bed! For the hilarious semi-fictionalized food tour led by Steve Coogan and Rob Brydon is coming to an end. Coogan and Brydon reprise their roles as fictionalized versions of themselves for the last time in The Trip to Greece, the fourth and final film in Michael Winterbottom’s comedy series following the two comedians as they eat and joke their way through Europe. Watch The Trip to Greece trailer below.

The Trip to Greece Trailer

The Trip films has been one of the most consistently funny film series around since Coogan and Brydon first teamed up to eat their way through northern England in 2010. The Trip, which debuted as a BBC TV series before being edited into a feature film, perfectly plays on both Coogan and Brydon’s comedic strengths, with their dry-witted banter competing impressions of Michael Caine launching the film to international success.

Delightfully wry and soothingly low-key, The Trip series would continue to make us all giggle and drool over food for the next 1o years, with Winterbottom returning to direct Brydon and Coogan in 2014’s The Trip to Italy, 2016’s The Trip to Spain, and finally, this year’s The Trip to Greece. But it’s a bittersweet reunion for Brydon and Coogan in the upcoming film, which is set to be the final film in the series. I honestly don’t know what I have to look forward to without a new The Trip film to surprise me with its release. And IFC is setting it for a May theatrical and VOD release at that, guaranteeing it close to zero box office as the ongoing coronavirus (COVID-19) pandemic shows no signs of slowing by then. But at least we can take one last trip with Coogan and Brydon (this time with Marlon Brando impressions!) while we’re stuck in our homes.

Here is the synopsis for The Trip to Greece:

When Odysseus left Troy it took him ten years to get back to his home in Ithaca. Steve and Rob have only six days on their own personal odyssey in THE TRIP TO GREECE. On the way they argue about tragedy and comedy, astronomy and biology, myth, history, democracy and the meaning of life! Featuring locations such as: Temple of Apollo at Delphi, the Ancient Agora of Athens, the Ancient Theatre of Epidaurus, the unique island of Hydra, the Caves of Diros, Nestor’s Palace, Niokastro Fortress in Pylos, and Ancient Stagira, as well as a lot of shooting in restaurants and hotels in Athens, Hydra, Lesvos, Chalkidiki, Pelion, Kavala, and at the Peloponnese.