The Making of The Art of Star Wars: The Rise of Skywalker

“Looking at our database as I write this, there were upwards of 20,000 pieces of concept art created for The Rise of Skywalker. The Art of Star Wars: The Rise of Skywalker has 684 pieces squeezed into its pages, the precise number of pages (256) that each of the Art of Star Wars books have. So, there’s a surprising amount of math that goes into it, knowing that I have X amount of subjects to cover and only so much room to cover them. I do my best to stick to those numbers when placing art into the rough layout.”

While on the subject of concept art, Szostak recently took to Twitter to show off an early exploration of Kylo Ren in his sanctuary by concept artist Andrée Wallin:

“The Art of #TheRiseOfSkywalker book is out now. Here's an early exploration of Kylo Ren in his sanctuary. I was experimenting with how graphic and simplistic I could push the interior design with this one.” – concept artist @andreewallin #StarWars https://t.co/eUWCRphQ9x pic.twitter.com/qAoIu7YQxN

If you haven’t picked up Szostak’s excellent book yet, our friends at Gizmodo have an exclusive look at some of the concept art featured in the hardcover tome, including a BB-8 Battle Tank!

Arriving on October 20, 2020, Star Wars: The Lightsaber Collection canon reference book from Insight Editions, written by Daniel Wallace, will be a detailed visual guide showcasing every lightsaber from the Star Wars canon. You can pre-order the book at Amazon. Here’s a snippet from the leaked product description, via Reddit:

“Each spread features a detailed illustration of each lightsaber, allowing readers to see the intricate detail in the hilts and the brilliance of each energy blade, as well as information about the construction and filmmaking secrets about the creation of each weapon.”

This imagined trilogy would be directed by Michael Anderson (Logan’s Run), with a script Stanley Mann (Conan the Destroyer), Irvin Kershner (director of The Empire Strikes Back), and story by George Lucas himself. However, instead of John Williams doing the movie, Peter Bernstein (The Ewok Adventure) would be composing the score.

Check out the Lando Calrissian trilogy posters and all the cool details here.

Blast Points Podcast hosts Jason Gibner and Gabe Bott have generated a ton of excellent content to keep us entertained during the quarantine. The duo put out seven episodes alone in March, with topics covering the classic Dark Horse Star Wars comic series Tales of the Jedi, The Skywalker Legacy documentary, and the rise of Ahsoka Tano.

In Episode 211 – The Star Wars FEET Discussion, topics include: what’s inside Chewbacca’s feet, what’s under a Jawa’s robes, and why Max Rebo is only feet. You’ll laugh, you’ll cry, you’ll feel weird inside as you celebrate the love with Jason, Gabe, and special guest Tom Spina of Regal Robot.

Then, in Bonus Episode – QVC 1996 Star Wars Collectibles Show (Commentary), Jason and Gabe watch the two magic Steves, Steve Bryant and Steve Sansweet in a classic Star Wars QVC special! It’s nonstop good times as the duo travels back to 1996, and you can watch along with their commentary thanks to the magic of YouTube:

In Star Wars: The Rise of Skywalker, many fans have spotted B1 Battle Droids in Babu Frik’s workshop, but did you catch the cameo by the red mechanical mascot of J.J. Abrams’ Bad Robot Productions? Reddit user u/NickMoore30 posted a behind-the-scenes image of the robot – a screengrab from The Skywalker Legacy documentary, included with the home video release of The Rise of Skywalker: 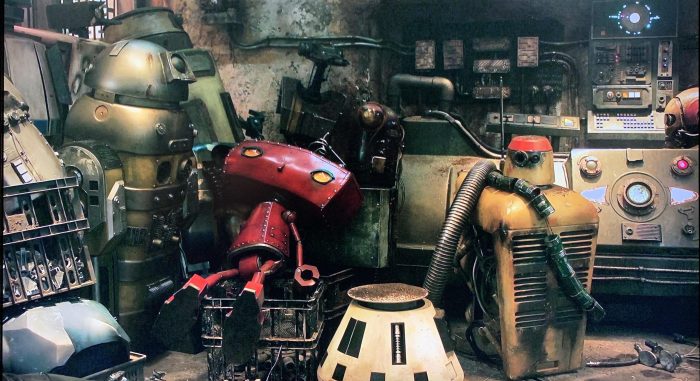 Lucasfilm Archivist Madlyn Burkert gives us an exclusive look at some never-before-seen props featured in Star Wars: The Rise of Skywalker, including the Sith Wayfinder, Leia’s lightsaber, and more!

If you’re unfamiliar with Youtube user Toy Polloi, the vintage toy collector has a channel devoted to the repair and restoration of vintage and modern toy lines, including Star Wars, Transformers, Mego, Masters of the Universe, Micronauts, Six Million Dollar Man, and GI. Joe. Check out his paint repair guide for a vintage Kenner Boba Fett:

Always a pleasure to see the vintage Kenner versions of my favorite rowdy cantina boys show up in #StarWars #TheCloneWars! Greedo, Walrus Man, Hammerhead, and Snaggletooth are back it – bless you @dave_filoni. pic.twitter.com/jqtMj8EItf

ICYMI: An Interview with Neal Scanlan

With The Rise of Skywalker now available on 4K Ultra HD, Blu-ray, and DVD, I recently got the chance to speak to Creature & Special Make-up Effects Creative Supervisor Neal Scanlan about his work on the film. He discussed the process of creating creatures for the saga, the origins of Babu Frik, and some tantalizing details on a character we didn’t see. You can read the full interview here.

Have you watched Star Wars Galaxy of Adventures? This series of animated shorts, which you can check out at StarWarsKids.com and the Star Wars Kids YouTube channel, reimagine some of the saga’s greatest moments and characters. The series recently began its second season and you can check out two of the latest episodes below:

Alex Explains It All on Star Wars Explained

And finally, Alex over at Star Wars Explained has been churning out a bunch of great content lately, specifically around The Rise of Skywalker. Check out the videos below to learn all about the five additional scenes included in Rae Carson’s novelization, as well as all of the easter eggs, references, and connections found within the book, which I’d highly recommend!