In this edition Sequel Bits: See a concept drawing of the Green Ranger intended for Power Rangers 2 Tiffany Haddish is working on Girls Trip 2 in qua..

In this edition Sequel Bits:

Saw that Power Ranger 2017 came out 3 years ago yesterday. So I decided to draw what I think Tommy Green Ranger could look like. With the lockdown it give me a lot of time to work on my digital paint ? #powerrangers2017 #powerranger #fanart #conceptart #digitalart #digitalillustration #wacom #drawing

Weta Workshop artist Sanit Klamchanuan posted this drawing of what the Green Ranger might have looked like if he ended up getting introduced in a Power Rangers sequel that was teased in a mid-credits sequence. Unfortunately, we’re not likely to see Tommy Oliver, because that sequel won’t happen, but at least we can imagine how cool it might have been.

Girls Trip was a comedy hit back in 2017, and following in the footsteps of other successful comedies, there might be a sequel in the works.

Comedian Tiffany Haddish talked with The Huffington Post a little while back and revealed that she’s been meeting with Girls Trip co-stars Queen Latifah, Regina Hall, and Jada Pinkett-Smith on Zoom to talk about some ideas for Girls Trip 2. It’s not officially in the works, but Haddish and writing partner Tracy Oliver have a treatment ready to go if Universal Pictures is interested. 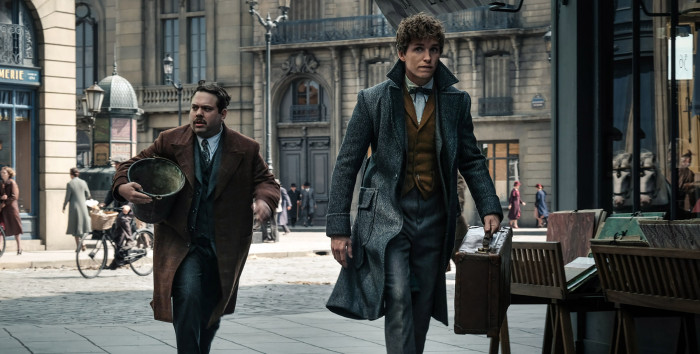 Whether you like it or not, Fantastic Beasts 3 is on the way. While the movie doesn’t have a title yet and production is currently halted due to the coronavirus, co-star Dan Fogler teased what’s in store for the sequel, which will be unfolding during World War II. He told Syfy Wire:

“I can say I read the script and the character development is really lovely and it’s very similar to the feel of the first movie, which I think is great. It’s leading toward this massive war with the backdrop of World War II, so you can just imagine epic battle scenes are coming.”

However, we’re not sure when the movie will get off the ground, especially with the production delay. Fogler added:

Another sequel that is waiting in the wings is the follow-up to Call Me Be Your Name from director Luca Guadagnino. The filmmaker still plans in bringing Armie Hammer and Timothée Chalamet back for a new story, as well as supporting stars Michael Stulhbarg, Esther Garrel, and more. Unfortunately, coronavirus has put a wrench in plans for the sequel to move forward at this time. The filmmaker explained to Gay.it (via The Playlist):

“I was going to America to meet a writer I love very much, whose name I don’t want to mention, to talk about the second part. Unfortunately, everything is canceled. Of course, it’s a great pleasure to work with Timothée Chalamet, Armie Hammer, Michael Stulhbarg, Esther Garrel, and the other actors. They will all be there in the new film.”

It’s not clear if the movie will be based on author André Aciman‘s recently released sequel book, Find Me, but we’re anxious to see the project move forward.

Even though everyone seems to have endless questions about Guardians of the Galaxy Vol. 3, director James Gunn was asked on Twitter about the third installment of another franchise he worked on. Gunn wrote the first two live-action Scooby-Doo movies, but Scooby-Doo 3 never came together. However, Gunn revealed what the premise would have been:

“The Mystery Inc [sic] gang are hired by a town in Scotland who complain they’re being plagued by monsters but we discover throughout the film the monsters are actually the victims and Scooby and Shaggy have to come to terms with their own prejudices and narrow belief systems. (Yes, really!).”

That sounds like it would have been a great meta way to play with the formula of Scooby-Doo. It’s a shame we’ll never see it come together.

Finally, another sequel that we’re probably not going to see anytime soon is a follow-up to Alita: Battle Angel. Even though the movie ends on a cliffhanger, it probably didn’t wind up with enough box office money to warrant a sequel. But if one happens, Christoph Waltz is game to come back. Unfortunately, he hasn’t heard anything that gives us any hope for the sequel. Waltz told Collider:

“I haven’t heard anything and I’m a little disappointed and surprised that I haven’t heard a thing so far, because I know that it has followers. I know that people liked it and aside from what others said, I loved it and I liked working on it and I liked the result. You know, it was Fox and Fox doesn’t exist anymore. Now it’s Disney. Maybe it doesn’t fit into the Disneyfication, but I have no clue. I have no clue. Maybe they’re working on something and I wouldn’t be the first person to hear, but meanwhile, I haven’t heard anything.”

Next post The Morning Watch: John Mulaney’ Stories from ‘SNL’, ‘Stranger Things’ in Other Languages & More

Previous post ‘Saturday Night Live At Home’ Is a Weird and Wonderful Pick-Me-Up, and Tom Hanks Joined In Too