Watch: ‘The Lord of the Rings’ Cast Reunite Over Zoom to Show Off Matching Tattoos, Swap Filming Stories

In a time when the casts of cult TV shows and beloved movies are getting together virtually left and right, there is still only one Zoom reunion to ru.. 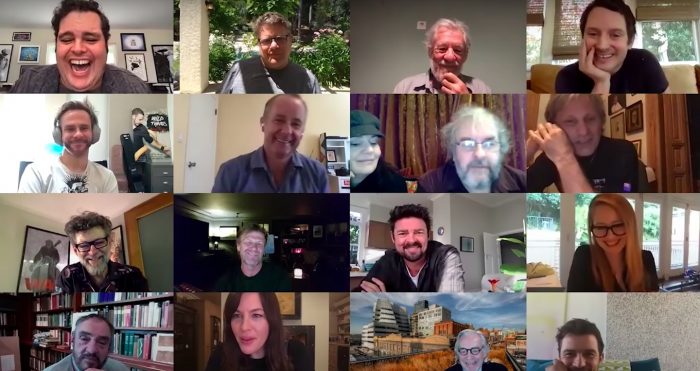 In a time when the casts of cult TV shows and beloved movies are getting together virtually left and right, there is still only one Zoom reunion to rule them all and in the darkness bind them — or at least, provide us a small reprieve as the real world gets more distressing by the minute. Josh Gad has been uniting casts of Back to the Future, Splash, and The Goonies, with his Reunited Apart web series, but his latest one is the most epic reunion yet.

The cast of The Lord of the Rings got the Fellowship back together over Zoom to swap filming stories and show off the matching tattoos they got together. Elijah Wood, Sean Astin, Ian McKellen, Billy Boyd, Dominic Monaghan, and Orlando Bloom all appeared and were soon joined by “many surprise” guests in the biggest Zoom reunion that Gad has held thus far. You can watch the entire hour-long The Lord of The Rings reunion below.

Reunited Apart: The Lord of the Rings Reunion

The cast of The Lord of the Rings reunited over Zoom in Josh Gad’s Reunited Apart web series, to trade filming stories, re-enact iconic scenes, and show off the loving chemistry that they’ve displayed since the fantasy trilogy became a global phenomenon in the early 2000s. The aforementioned cast members were joined by Peter Jackson and screenwriter Philippa Boyens, before other cast members slowly trickled in, including Viggo Mortensen, Andy Serkis, John Rhys-Davies, Sean Bean, Miranda Otto, Karl Urban, and Liv Tyler. Also Taika Waititi pops up for some reason!

Some of the trivia that the cast and Jackson divulged are well-known by longtime fans of Lord of the Rings — Mortensen was a last-minute replacement to play Aragorn, how Jackson was able to convince the studio to shoot all three movies at once, resulting in some chaotic scheduling practices. Jackson revealed that this frenetic scheduling resulted in one of The Fellowship of the Rings‘s most memed moments: Boromir’s now-famous line, “one does not simply walk into Mordor.”

“That entire speech that Sean had to deliver at the council of Elrond,” Jackson said, “was written the night before…we gave it to Sean the morning he arrived. What Sean did, which I thought was very clever, is he got a printout of the speech taped to his knee. When he did that scene, you’ll see…” Jackson then mimed Bean looking up from his lap to give his painfully exasperated expression.

But the best part of this Zoom reunion — which is raising money for No Kid Hungry, a charity organization dedicated to eliminating child hunger in America — is the passion that the cast members give while recreating their famous scenes from the film. I dare you not to well up in tears when Astin gives Samwise’s moving speech to Frodo.

The post Watch: ‘The Lord of the Rings’ Cast Reunite Over Zoom to Show Off Matching Tattoos, Swap Filming Stories appeared first on /Film.

Next post How Did This Get Made: A Conversation With Al Ruddy, Producer of ‘Million Dollar Baby,’ ‘Little Fauss and Big Halsy,’ and ‘The Longest Yard’ [Part 2]

Previous post VOTD: Turning Up the Heat in Spike Lee’s ‘Do the Right Thing’