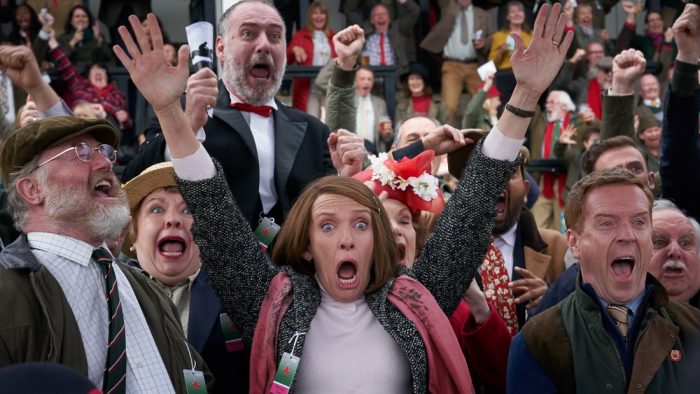 Jane (Toni Collette) is tired. Tired of working multiple jobs in small-town Wales, tired of her boring husband Brian (Owen Teale) who bums around watching TV all day, tired of taking care of her aging parents, tired of the drudgery her life has become. So when Howard (Damian Lewis), a former hotshot racehorse owner, becomes a regular at the bar where she works, Jane is inspired to try her own hand at raising a racehorse – but she needs some help to pull it off. Based on a 2015 documentary called Dark Horse, director Euros Lyn’s Dream Horse is an inspirational, winning sports drama about a small town with big hopes.

The trouble with Jane’s plan is that racehorses are expensive. So she reaches out to the townsfolk to see if they want to form a syndicate, an ownership collective in which they all pay $10 a week for shared rights to the future winnings of their still non-existent racehorse. A coterie of characters shows up to participate, including retirees, local small business owners, and even the town drunk.

Thus begins an unlikely but true story about the career of Dream Alliance, their beautiful brown racehorse whom Jane and Brian care for like one of their own children. Races ensue, obstacles are encountered, tragedy occasionally forces its way in – it’s all very obvious, but there’s an exuberance to everything, a genuine excitement from these characters placing all of their dreams into a long shot. It may be a long shot, but it’s their long shot. “I need something to look forward to when I get up in the morning,” Jane says, “to remind me that things can change.” Dream Horse is about these small town goofballs finding a sense of identity, and Jane makes it clear that working with Dream Alliance has been the only thing in her life which has given her a real idea of who she is as a person.

Neil McKay’s script devotes a few minutes to the idea of wealth inequality, but it ends up feeling tangential to the plot instead of a key theme meant to tie in with the rest of the film. During one of the early races, the syndicate is introduced to a posh gentleman who owns a horse that’s won the last 9 out of 10 races, and he clearly looks down on these lower class interlopers. Their brief confrontation seems to be the set-up of a slobs vs. snobs-style rivalry, but the rich guy never has any meaningful lines of dialogue after their first meeting. It’s as if you can see the filmmakers trying to decide if they want to go down that road, and ultimately choosing not to. It’s fine that they didn’t go there, but since there’s not much else on the film’s mind, that feint toward exploring that avenue left me daydreaming about what it might have been able to say if it have chosen differently.

The script doesn’t add anything new to the sports movie formula – you can see every major plot development coming from the stratosphere – but Lyn’s execution of those ideas powers the movie through its predictable plotting. He’s previously directed episodes of Daredevil and His Dark Materials, and while there’s nothing overly inventive in Dream Horse – it’s mostly a straightforward, simply shot drama – there is some dynamic camerawork in the racing scenes that kicks the filmmaking into a higher gear. Swooping overhead shots establish the layout of horse clusters during races and help you track Dream Alliance as he maneuvers throughout, and shots which appear to be mounted to the horse’s side show the more visceral, nearly first-person perspective of what it’s like to gallop inside that pack at top speed.

Dream Horse is a very nice movie, and it’s also overly cheesy at times: there’s a whole thing where one of the owners wears novelty socks with horses on them during races, and watching him proudly get them out, sadly put them away, and then determinedly retrieve them again as the events of the film ebb and flow had me rolling my eyes. But Dream Horse is also the perfect solution to the question, “What can I watch with my parents where everyone’s going to walk away happy?” Will it be anyone’s favorite movie of all time? Maybe not. But it’s an entertaining, diverting little romp that will make you chuckle, cheer, and maybe even tear up.