Since Solo: A Star Wars Story ended up being a box office disappointment, it’s not likely that we’re going to get a sequel, and that’s coming from the..

Since Solo: A Star Wars Story ended up being a box office disappointment, it’s not likely that we’re going to get a sequel, and that’s coming from the film’s co-writer Jon Kasdan. But if the story arc that began in the spin-off were to continue, it would be awesome if it ended up making Lando Calrissian even more prominent. Apparently artist Peter Stults thought the same thing, which is why he used his quarantine time to make a trio of posters for a film series called The Calrissian Chronicles. Check out the Lando Calrissian trilogy posters and all the cool details within them below.

This imagined trilogy would be directed by Michael Anderson (Logan’s Run), with a script Stanley Mann (Conan the Destroyer), Irvin Kershner (director of The Empire Strikes Back), and story by George Lucas himself. However, instead of John Williams doing the movie, Peter Bernstein (The Ewok Adventure) would be composing the score.

The overall vibe of the trilogy feels like a mix of 1970s blaxploitation and sci-fi with a little bit of fantasy tossed in there, which you can see in each of the posters below. 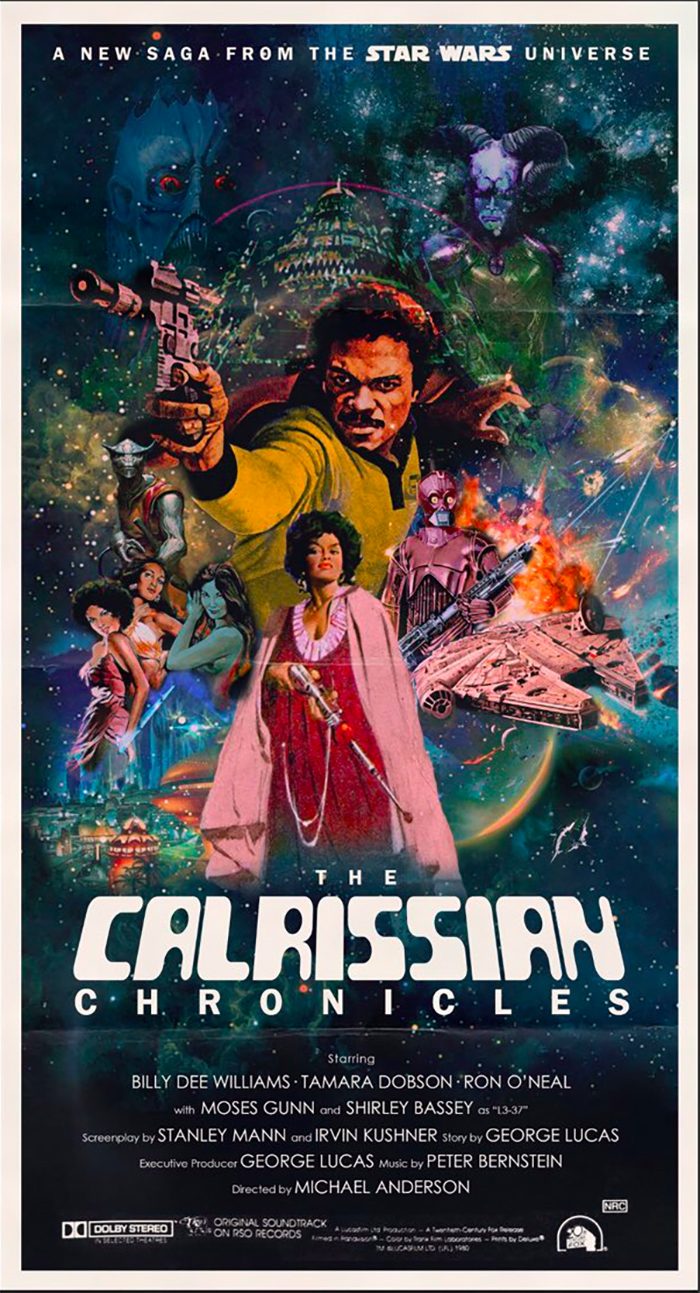 The first installment of The Calrissian Chronicles obviously features Billy Dee Williams in the role of Lando Calrissian. It would also have prominent roles for Tamara Dobson, Ron O’Neal and Moses Gunn. But the best tidbit here is that Shirley Bassey would play Lando’s beloved droid counterpart L3-37. 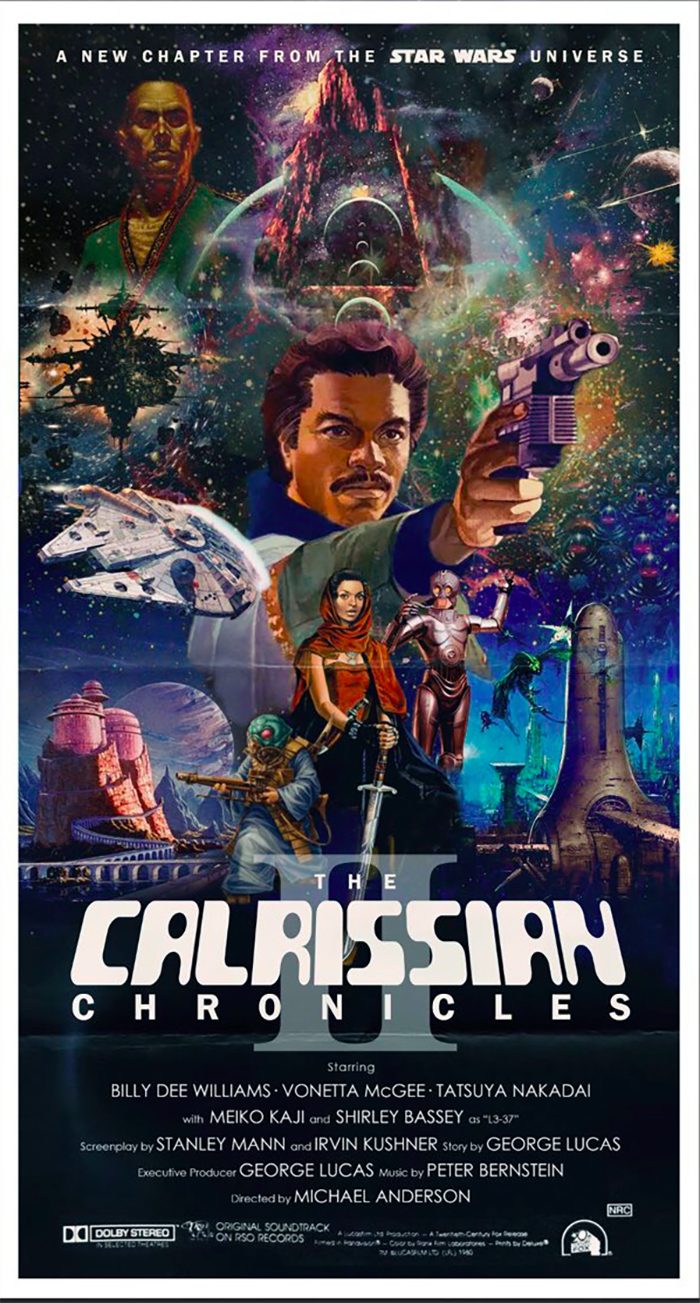 The second installment looks to have somewhat of an Asian influence with the addition of Tatsuya Nakadai and Meiko Kaji joining the cast. There’s also a role for Vonetta McGee, and Shirley Bassey is still around as L3-37. 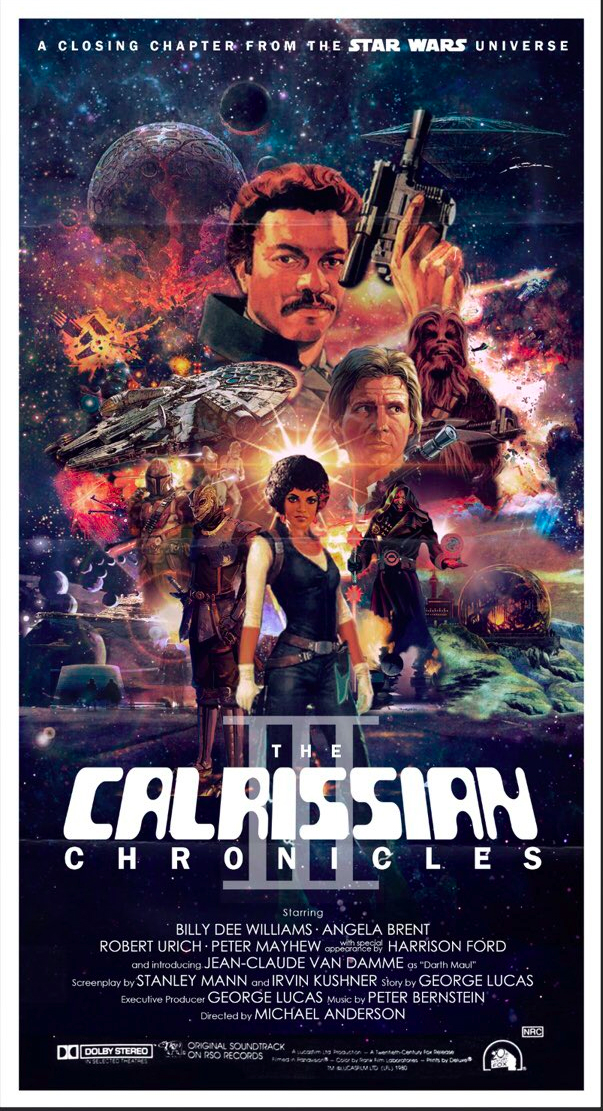 In the final installment, a bit Star Wars returns with Peter Mayhew returning as Chewbacca, as well as a “special appearance” by Harrison Ford as Han Solo. Otherwise, the cast expands again with Angela Brent and Robert Urich. However, Shirley Bassey isn’t listed as L3-37 anymore, so maybe she met her end in the second installment.

But the real treat here in this final installment is imagining the introduction of Jean-Claude Van Damme to Hollywood as none other than Darth Maul. It’s a nice reference to the character’s return in Solo: A Star Wars Story, and just thinking about the skilled martial artist playing Darth Maul is so fun.

Unfortunately, we’ll never get to see movies like this with Billy Dee Williams in the lead. But these would make great comic books. Then again, maybe there’s hope for a Lando Calrissian film series starring Donald Glover. After all, Sleight director J.D. Dillard and writer Matt Owens are on the verge of becoming the first black creators to tackle Star Wars behind the camera and on the page, so maybe they have something exciting planned for the fellow scoundrel.

For now, we’ll just have to hope that these posters get turned into prints.

Next post The Quarantine Stream: ‘Fruits Basket’ is a Wholesome Slice-of-Life Anime That is a Treat for the Eyes and the Heart