In this edition of Star Wars Bits: Disney+ Calls in the Troops with Star Wars: The Bad Batch Empire at 40: 15 Factoids About The Empire Strikes Back ..

Disney+ Calls in the Troops with Star Wars: The Bad Batch

Star Wars: The Bad Batch, an animated spin-off series that will focus on the Bad Batch, a group of elite clones first introduced in The Clone Wars, as they find their way in a rapidly changing galaxy in the immediate aftermath of the Clone War.

Fresh off of the critically-acclaimed series finale of Star Wars: The Clone Wars, the Disney+ original series will premiere on the streaming service in 2021. Here’s the official description for the series, which briefly explains the origins of The Bad Batch:

“Members of Bad Batch – a unique squad of clones who vary genetically from their brothers in the Clone Army — each possess a singular exceptional skill which makes them extraordinarily effective soldiers and a formidable crew. In the post-Clone War era, they will take on daring mercenary missions as they struggle to stay afloat and find new purpose.”

The news that the Bad Batch would be getting their own series was originally broke by Noah Outlaw (@OutlawNoah), host of Kessel Run Radio (@KRTransmissions) back in June.

We can 100% say that the next Star Wars animated series features The Bad Batch as the main leads. It’ll take place after “The Siege of Mandalore” and Hunter, Crosshair, Tech, Wrecker, and Echo will all be back. pic.twitter.com/0GLRZA51HI

Empire at 40: 15 Factoids About The Empire Strikes Back

On May 21, 1980, The Empire Strikes Back made its theatrical debut. To celebrate the classic film’s landmark 40th anniversary, StarWars.com presents “Empire at 40,” a special series of interviews, editorial features, and listicles.

Star Wars luminaries George Lucas, Mark Hamill, Joe Johnston, Ben Burtt, and more chatted with StarWars.com as part of their yearlong celebration of the 40th anniversary, revealing fun behind-the-scenes factoids straight from the source! For example, tauntaun sounds are the slowed-down chatter of a sea otter!

And its name was Mota. Ben Burtt recorded the sounds at a California farm. “The sea otter had a very high-pitched squawking and the nice thing about it was that it almost sounded like it was talking,” described Burtt.

And on the subject of Empire’s theatrical debut, the film recently found itself at the top of the box office charts again, 23 years after the February 1997 Special Edition reissue. According to Deadline, the 1980 sequel struck hard and fast with a $611K 3-day and $644K five-day gross. That brings the lifetime gross of the Irvin Kershner-directed movie to $290.4 million.

In an interview with Esquire, Solo: A Star Wars Story actor Alden Ehrenreich was asked if he’d ever reprise his role of Han Solo, to which he said, “It depends on what it is. It depends on how it’s done. It depends if it feels innate to the story.”

As for a Solo sequel, it doesn’t seem like there’s anything going on that front right now, but there is a sliver of hope. He has heard some rumors about happenings in the Star Wars universe:

As someone who thoroughly enjoyed Solo: A Star Wars Story, I would love to see more of the adventures of Han Solo, Chewbacca, and Lando Calrissian, as well as more stories featuring Qi’ra, Dryden Vos, and Enfys Nest. For what it’s worth, Editor-in-Chief of Cinelinx and Star Wars scooper Jordan Maison extraordinaire has heard rumblings about Disney+ series in development that focus on characters from Ron Howard‘s 2018 film.

FWIW, I'd heard of a couple Disney Plus series being developed to focus on various characters in #Solo. Haven't heard any updates since the start of this year, however, so not sure if those are still being worked on, or ever got beyond the "idea stage."

In Doctor Aphra: An Audiobook Original, an expanded adaptation of the galactic archaeologist’s introduction in Marvel’s Darth Vader series, Aphra makes a deal with the Sith Lord and begins a memorable misadventure. StarWars.com has an exclusive excerpt from the audio drama, in which actor Emily Woo Zeller brings Aphra to life “with a simultaneously hilarious, chaotic, and faux-confident performance befitting the not-so-good doctor.”

In this exclusive clip, an all-new scene added to the classic story, Aphra encounters the legendary pirate Maz Kanata, who is not to be trifled with. Look for Doctor Aphra: An Audiobook Original, written by Sarah Kuhn and featuring a full cast, on digital download starting July 21.

Also, Star Wars super-fan and Doctor Aphra cosplayer Alyssa Vidales (@instalyssa) recently revealed on Twitter that she was the reference model for the audiobook’s cover art, illustrated by Kevin Tong!

The best parts about the new Doctor Aphra audiobook:

2. The AMAZING @tragicsunshine illustrated the cover!!

3. I was the reference model for this Doctor Aphra! THAT IS MY POSE!!! https://t.co/IednFtjyaw

On the most recent episode of The Star Wars Show, we get a behind-the-scenes look at Star Wars: Jedi Temple Challenge and watch adorable baby animals take on the Empire. Plus, author E.K. Johnston and host Kristin Baver talk Padmé fashion with legendary costume designer, Trisha Biggar. 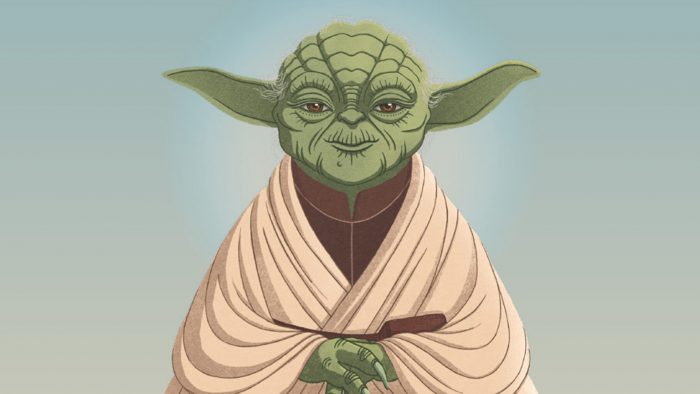 Amy Ratcliffe’s The Jedi Mind Explores Mindfulness in a Galaxy Far, Far Away

StarWars.com associate editor Kristin Baver recently sat down with Amy Ratcliffe, author of Star Wars: Women of the Galaxy, to discuss her upcoming book, The Jedi Mind. The book takes quotations and lessons from Star Wars and pairs them with mindfulness practices such as breathing, posture, and meditation.

These lessons are complimented by stunning illustrations from artist Christina Chung to give readers meditations on everything from letting go to looking inward. StarWars.com has your first look at the cover as well as pages and passages on gratitude and more! You can pre-order your own copy now before it’s released this fall!

Also, Amy Ratcliffe was recently in the interviewer chair for Nerdist, going over 40 minutes with Dave Filoni, supervising director and executive producer of Star Wars: The Clone Wars, to talk about the show’s legacy, making the final season, and to answer some fan questions!

The Mandalorian-Inspired Books and Comics Are Coming

StarWars.com recently announced a new publishing program dedicated to The Mandalorian, featuring books and titles for fans of all ages:

In addition, The Mandalorian-inspired comics are coming from Marvel and IDW Publishing, and magazine, novelty, and coloring and activity titles are on the way too. Younger bounty hunters can look forward to a Little Golden Book and a Screen Comix retelling of Season One.

Alex Damon at Star Wars Explained has a great breakdown of all the new titles coming our way!

And finally, watch as the Oscar-winning composer Ludwig Göransson (Black Panther, Creed) performs the theme from The Mandalorian. Also, just as a friendly reminder, all eight episodes of the behind-the-scenes series Disney Gallery: The Mandalorian are streaming right now on Disney+ and it’s an absolute delight (and a must-watch for any Star Wars fan). Until next time, may the Force be with you… always!

Next post ‘The King’s Man’ Posters: Ralph Fiennes’ Scowl is as Sharp as His Sword