I've said it before and I'll say it again: right from the start, "Star Wars: Visions" has looked like the creative revitalization that the f.. 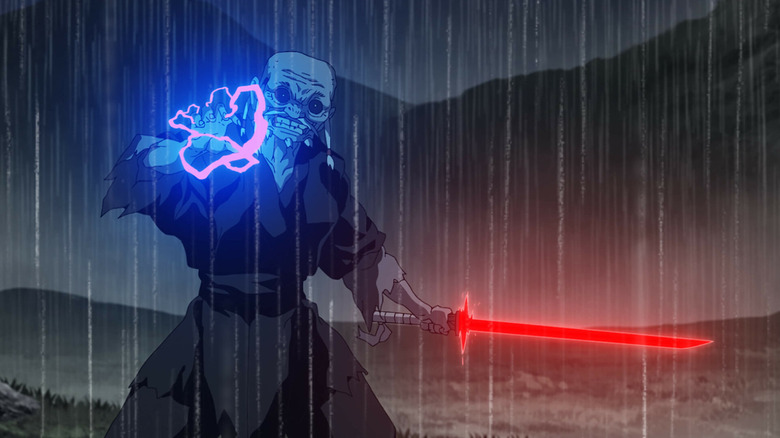 I've said it before and I'll say it again: right from the start, "Star Wars: Visions" has looked like the creative revitalization that the franchise has sorely needed in the wake of "The Rise of Skywalker," and every new bit of information we've received in the time since has only made me more confident. StarWars.com has been gearing up for the impending release of the animated anthology series by teasing new character details, such as this earlier look at the protagonists of various episodes. This time, co-executive producer Justin Leach is taking us on a trip through the Dark Side of the Force with five of the villains.

The official website warns of spoilery character and story details for "Star Wars: Visions" to follow, which we'll reiterate here.

The Elder From The Elder 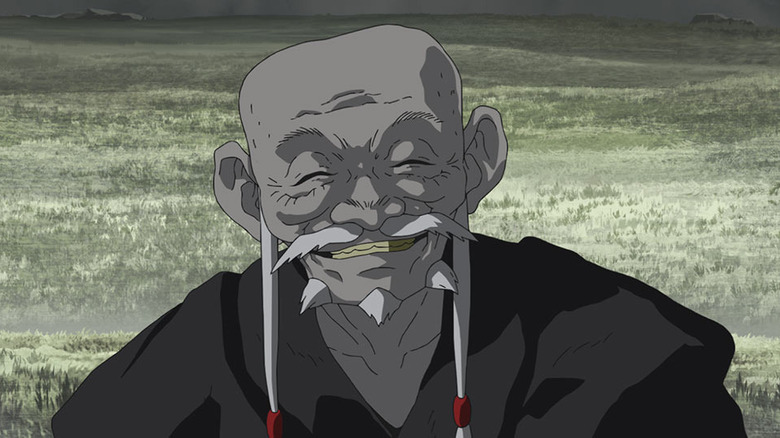 "The Elder" is an episode of "Star Wars: Visions" that we've previously known will be set before the events of "The Phantom Menace." Leach describes the eponymous Elder as "a master swordsman seeking worthy adversaries. Even though his appearance is that of an aged old man, he moves gracefully and effortlessly against any opponent." This intriguing-sounding episode will involve the mysterious Elder squaring off against the most powerful enemy of all: time and mortality. Leach explains that, although he's unquestionably a villain, the Elder won't be subscribing to the usual philosophy of traditional "Star Wars" antagonists in the past.

"While he appears very Sith-like, he is clearly more focused on mastering his skills than following their ideology … Since his motivations seem to be more about mastering his skill in combat and less about gaining power, this adds a new dimension to the Sith archetype."

Am From The Twins 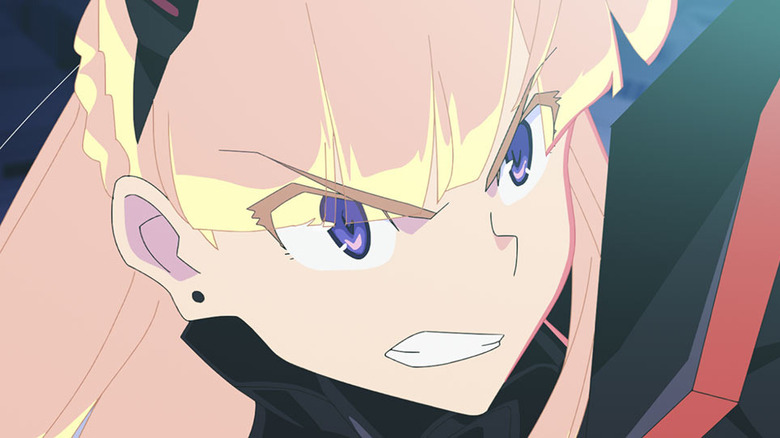 Next up is Am from the episode titled "The Twins." Introductions have already been made for Karre from the previous article, which makes Am the twin sister of the pair of Dark Side siblings and a sort of dark reflection of Luke and Leia Skywalker. According to Leach, "Am is consumed by her desire for power, and blind to the danger she faces." The visual references alone will set Am apart from any other character we've seen in canon, with Am apparently sporting some sophisticated armor and weaponry that will bring together elements of Darth Vader and distinctive anime styles.

"Am takes being a Dark Lord to the next level with her drive, ambition, and skill on a scale that could only be expressed through anime. It flips the classic Star Wars twins upside down in a way that is new and exciting." 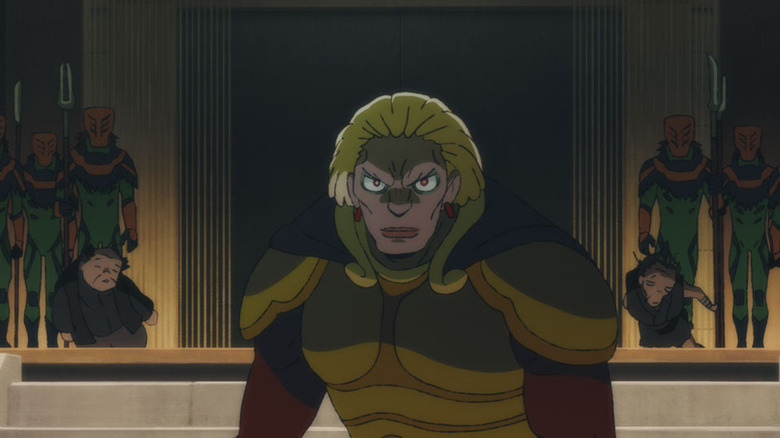 My first impression of Masago from "Akakiri" is that this character feels like what Gwendoline Christie's Captain Phasma could have looked like without her "chrome-dome" armor. That's where the similarities end, however, as Masago is revealed to be a Force-user who abides by a strict adherence to typical Sith belief systems of power and especially destiny. As designer Naoyuki Asano says, "She believes in this principle and uses it as an argument against her enemies when she tries to recruit them."

Sith Bandit Leader From The Duel 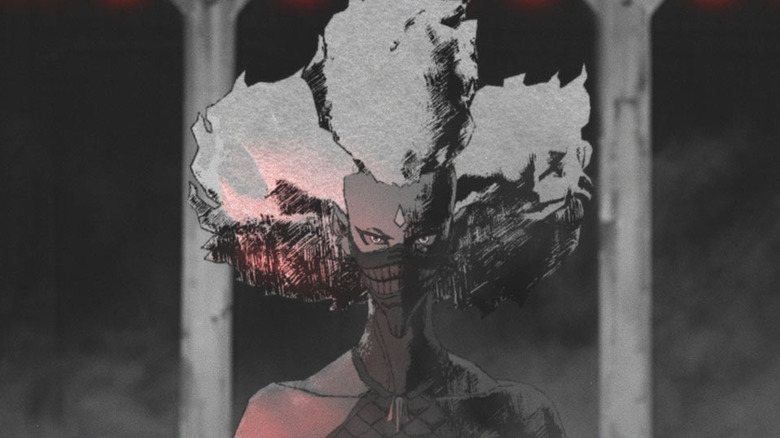 This next villain, who appears in the episode "The Duel," represents one of the most exciting aspects of bringing "Star Wars" back to its original influences and to those who would know it best. The Sith Bandit Leader embodies the Japanese concept of "Onna-Musha," a tradition of female samurai warriors of feudal Japan. This episode apparently takes its cues from the classic movie "Seven Samurai," in which the Ronin encounters this villain and must try to save the helpless villagers in danger. A glimpse of the character's many-bladed lightsaber briefly set social media ablaze and Leach informs us that allusions to another famous "Star Wars" villain were very much intentional.

"The Sith Bandit Leader is a fresh take on the classic Sith Villain expressed through dynamic action and fighting sequences not seen, perhaps, since Darth Maul faced Obi-Wan in 'The Phantom Menace.'" 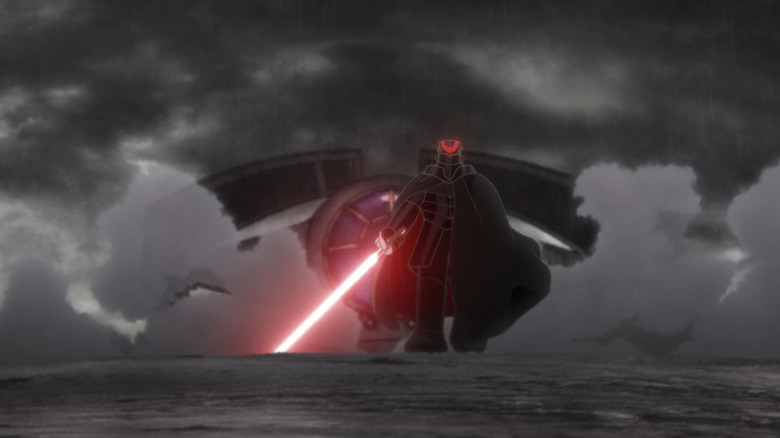 Here's another example of why I'm so looking forward to "Star Wars: Visions." This next episode, "T0-B1," is described as "A simple droid pretending to be a Jedi instead invites the wrath of an Inquisitor roaming the galaxy to hunt down all Jedi who remain after Order 66." I love this premise — partly because it ties together a key aspect of "Star Wars" mythology in the form of the Inquisitors, but mostly because it feels like exactly the kind of exploration between the lines of the movies that a series like this is best suited for. As you can see from its design, the Inquisitor foe in this episode will evoke a more medieval aesthetic counterbalanced by the character's innate ferocity, a frightening quality that only comes out in the heat of battle. Fascinatingly, this unstoppable death machine will allow the T0-B1 droid "to find the independence and strength he needs to grow."

Next post The 11 Scariest Scenes In The Halloween Franchise