"Ghostbusters" stars Bill Murray and Harold Ramis had a friendship and relationship in comedy that went all the way back to 1970, when the two were ju.. 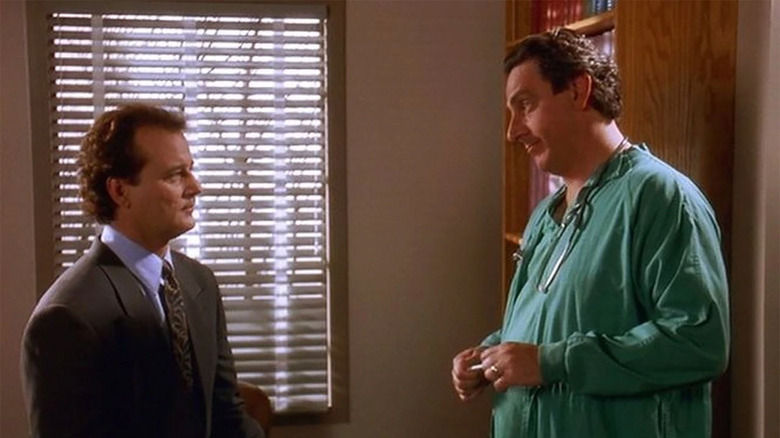 "Ghostbusters" stars Bill Murray and Harold Ramis had a friendship and relationship in comedy that went all the way back to 1970, when the two were just a pair of young comedians working in the famous Second City improvisational comedy troupe in Chicago. The coming years would see them working together on a variety of projects, including "The National Lampoon Radio Hour" and "The National Lampoon Show," but they would part ways as collaborators for awhile as Bill Murray became one of the Not Ready for Primetime Players on "Saturday Night Live" and Harold Ramis went to become the head writer for Second City's own TV show "SCTV."

Thankfully, the two would reunite on the big screen with a series of comedies, starting with "Meatballs" in 1979 and moving through "Caddyshack" and "Stripes" in the early 1980s. And they reached new heights of success with "Ghostbusters" and "Ghostbusters II." However, their collaboration on the 1993 comedy classic "Groundhog Day," about a weatherman stuck living the same day over and over again, had a disastrous impact not only their professional relationship, but their longtime friendship. In fact, because of the tumultuous time they had on set, the two wouldn't speak for 21 years. So what happened?

Trouble From The Start 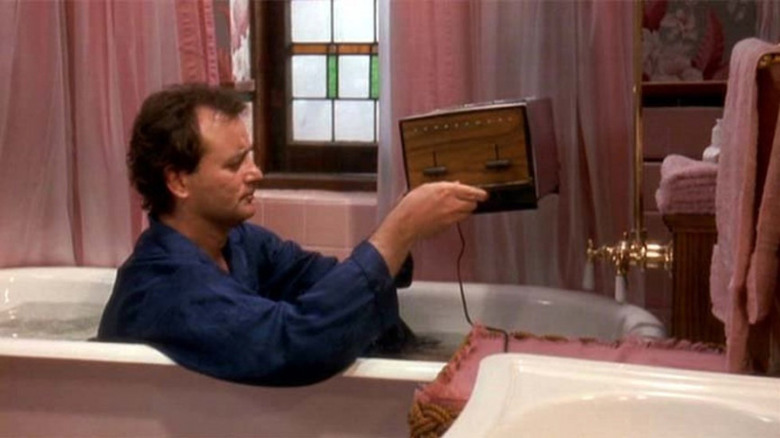 Even in the 1990s, Bill Murray was known for being a complicated collaborator. If anyone was ever able to convince him to star in a movie, there was no guarantee that he would actually show up. If Murray did show up, it sometimes meant having the actor completely tossing aside the script or barely reading them at all. But when it came to "Groundhog Day," Murray had a vested interest in the creative direction of the script before cameras started rolling.

The original script by Danny Rubin didn't provide quite as clean or clear of a set-up for the time loop that Bill Murray's character, weatherman Phil Connors, found himself in. Instead, it took some time to understand that the day was actually repeating. As Rubin recalled in the book "Wild and Crazy Guys" by Nick De Semlyen: "I think there was a lot to my script that meandered in a way that was pleasing and enjoyable, but it didn't have those sharp dramatic edges that Hollywood seems to require."

Aside from adding some sharper drama to the proceedings, Ramis and producer Trevor Albert also restructured the script to be a three-act story that worked as a studio-friendly comedy. Meanwhile, Murray had reached out to Danny Rubin, and he recruited the writer to help him with rewrites of his own. In-between random trips and errands, Murray and Rubin would work on the script little-by-little, though it wasn't the most conventional working environment. Rubin recalled their days spent in the Directors Guild Building on West 57th Street in New York:

"He wouldn't really talk to me. He would just grunt and pace and smoke cigars and read the newspaper. And after about an hour of puttering around he would sit down next to me and say some-thing like, 'OK, if I agree to do this movie… what do you suppose Phil would say here?"

Murray was acting as if there was a chance he wouldn't make this movie, all while sets were already being built based upon his seemingly agreed-upon involvement. During these rewrites, Ramis tried to wrangle the pages they had been working on, but Murray wouldn't even speak with him on the phone. When they finally got this alternate version of the script, it was worse than they'd imagined. Albert recalled:

"It was devastating. Terrifying. Harold and I were apoplectic. Danny and Bill's draft got sent to us two and a half weeks away from shooting, and the delicate balance that we had achieved had been disrupted significantly. I can't remember what had changed exactly, but the script came and we were freaked out by it. Some new lines were good, but mostly it was like a grenade had been thrown into the middle of everything."

But that was just the beginning of Murray's flummoxing behavior during the development and production process on "Groundhog Day." 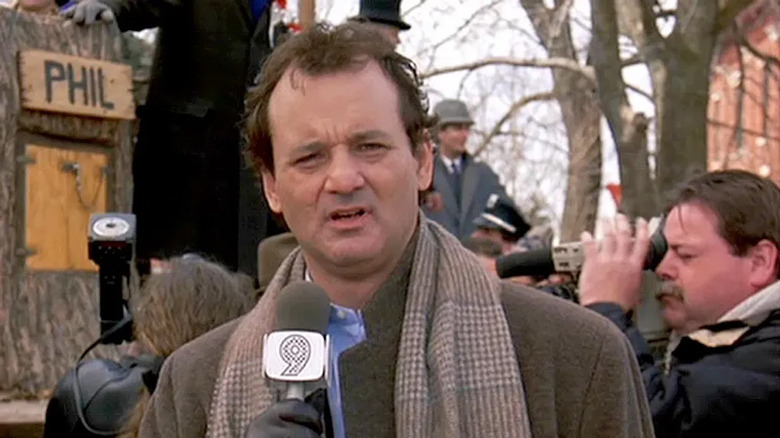 When Bill Murray arrived on location in Woodstock, Illinois, which was doubling for Punxsutawney, Pennsylvania, Ramis was finally able to meet with his friend, but it was far from a friendly exchange. While Ramis was hoping for "Groundhog Day" to be funny, warm and romantic, Murray felt like it needed to be somewhat chilly with a focus on existential crisis. Their differing viewpoints would create a confrontational relationship throughout the entire shoot. While Murray was delivering doughnuts to some of the local people who came to watch production, he had no such sweetness for Ramis.

During the shoot, the arguments between Ramis and Murray were so bad that the director forced the actor to get an assistant who could relay messages between them. Murray obliged by hiring a young deaf woman, which clearly didn't fix the issue. Ramis told Entertainment Weekly:

"He hired a personal assistant who was profoundly deaf, did not have oral speech, spoke only American sign language, which Bill did not speak, nor did anyone else in the production. But Bill said, 'Don't worry, I'm going to learn sign language.' And I think it was so inconvenient that in a couple weeks, he gave that up."

Rubin was only around for the first week of filming, so he didn't witness all the tension and disagreements, but he recalled, "It wasn't really between Harold and Bill — it was Bill. There was something going on with him. Because Harold seemed as bewildered by the whole thing as I was."

The primary problem seemed to be Bill Murray going through a sort of midlife crisis. When "Groundhog Day" was in production, Murray's marriage to his first wife Margaret Kelly was unraveling. They wouldn't actually divorce until 1996, but in the years leading up to that, Murray was clearly having trouble dealing with those issues. That frustration poured over into his work, making him supremely difficult to work with for a long time. Ramis flatly told The New Yorker that Murray was "really irrationally mean and unavailable."

On top of that, some believe that Murray grew to resent Ramis for having such a significant hand in defining his professional persona. Murray's work outside of his collaborations with Ramis left something to be desired. Michael Shamberg (via The New Yorker), a Hollywood producer and Ramis' college friend, felt that Murray was bitter about having his career so closely tethered to Ramis, as if he wasn't good enough on his own.

No matter what the cause, the creative disagreements between Ramis and Murray came to a head when the director grabbed his friend by the shirt collar and threw him against a wall, as recounted in Violet Ramis Stiel's intimate memoir, "Ghostbuster's Daughter: Life With My Dad, Harold Ramis." Though the two wouldn't speak for 21 years after that incident, with Ramis feeling "heartbroken, confused, and yet unsurprised by the rejection," they would thankfully reconcile their differences before it was too late. 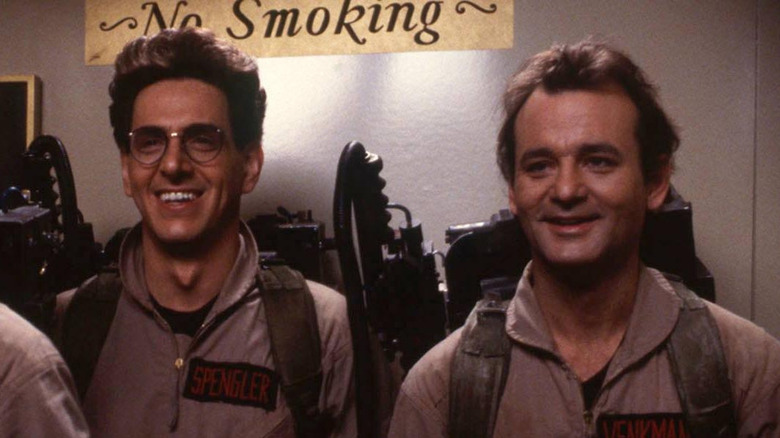 In 2010, Ramis was diagnosed with autoimmune inflammatory vasculitis. This kept him from being able to walk and speak for the remaining years of his life until his passing in February 2014. Perhaps knowing that not much time was left, Murray paid an unexpected visit to Ramis' home in the North Shore of Chicago shortly before his death. Accompanied by a police escort and a box of doughnuts, Murray arrived early in the morning and the two spent a couple hours making amends and laughing like old friends again.

After Ramis passed away in 2014, Murray made one last gesture of reconciliation for his friend. While presenting the award for Best Cinematography at the 2014 Academy Awards, after reading all of the nominees, Murray added, "Oh, we forgot one: Harold Ramis for 'Caddyshack,' 'Ghostbusters,' and 'Groundhog Day.'"

Even though Murray and Ramis may have had a hard time making "Groundhog Day," their hard work paid off and resulted in a classic comedy that gets watched over and over again every year, and not just on the makeshift holiday. Murray didn't attend the Hollywood premiere of the film, and it took him a little while to see the actual movie, but he has embraced it with open arms. In fact, in 2017, Murray attended the Broadway adaptation of the film. According to The New York Times, Murray was "visibly sobbing" as he watched the production with brother Brian Doyle-Murray (who plays the mayor in the film) and co-writer Danny Rubin. After the show, Murray said, "The idea that we just have to try again. We just have to try again. It's such a beautiful, powerful idea."

We're certainly thankful that Bill Murray tried again when it came to his friendship with Harold Ramis.

Read this next: The 15 Best '90s Comedies Ranked